The cradle of civilization and home of the famous Hanging Gardens, Babylon was reduced to ruins by the US invasion 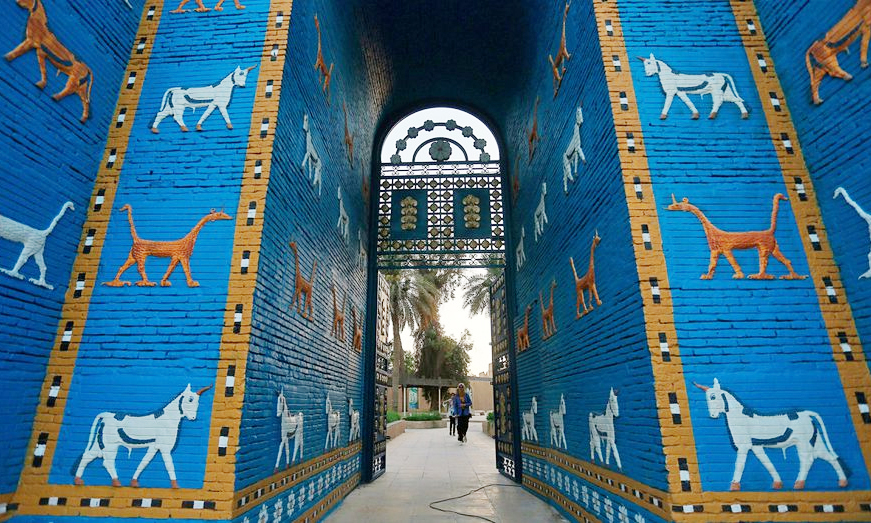 Sir — The fact that the ancient Mesopotamian city of Babylon has been declared a World Heritage Site by Unesco is heartening. The designation is not only prestigious; it is also important for the restoration of the historical city. Once renowned for being the cradle of civilization and home to the Hanging Gardens, Babylon was reduced to ruins in recent years by the invasion of Iraq by the United States of America. One hopes that with newly found international attention, the 4,000-year-old city will be able rise from the ashes to regain its former glory.

Sir — It is shocking that some Bharatiya Janata Party workers celebrated the release of Akash Vijayvargiya — the son of the veteran BJP leader, Kailash Vijayvargiya — on bail in spite of the charges against him (“Akash walks out of jail, BJP celebrates”, July 1). The first-time BJP legislator had been taken into custody for attacking a civic official with a cricket bat, while opposing the demolition of a dilapidated building already declared dangerous.

It is shameful for a nation when a criminal offence by a parliamentarian gets support from the ruling party workers in a public manner. People expect conscientious leaders to condemn such crimes. It is, therefore, heartening that the prime minister, Narendra Modi, denounced the incident and even suggested the expulsion of the workers who garlanded the lawmaker outside jail. Such action is rare; it reinstates public faith in the system and strengthens the image of the party.

Political parties should not enrol people as members unless they are known to be ethical in their practices and are educated. This can be ensured by first providing proper training to prospective members.

Sir — Imagine the plight of a country where an officer of the state gets beaten up by a youth with a cricket bat just because he was doing his duty. The incident was recorded on video and the assailant was arrested. However, the youth got bail only four days later, and emerged from jail amid great fanfare arranged by his supporters. He also said that his experience in jail was “good”. It seemed as though he were proud of himself and his actions. The youth, of course, is the son of a prominent BJP leader.

It is encouraging that the prime minister has censured his party members for breaking the law. Otherwise, citizens would express their discontent at the ballot box.

Sir — The prime minister is justified in denouncing the arrogance and misbehaviour of the lawmakers of the country as well as their kith and kin who have made it a habit to abuse public servants. However, this is not the only problem that needs to be addressed. Hate speeches and lynching should also be stopped. For this, mere preaching or empty threats from the prime minister will not be sufficient. Only swift and stringent action against the guilty, irrespective of their political association, can prevent such atrocities in the future.

Sir — Narendra Modi has rightly been vocal about his disapproval of Akash Vijayvargiya’s actions. It is this attitude that keeps the prime minister in the good books of the people of the country. In a nation where political leaders intimidating officials has become the norm, it is only the party leadership that can control such misbehaviour. If any lawmaker breaks the law, he should be removed from his post immediately.

Some politicians are like chameleons: they beg for votes politely, but the moment they get elected, their true colours begin to show. This becomes evident from the manner in which citizens begin to face the wrath of their political masters. However, public memory is short; these atrocities are soon forgotten, thus making errant politicians feel like they can get away with anything.

As a first step, every party should take a vow not to allow candidates with criminal records to stand for election. If party members are criminals, then criminal behaviour will certainly go unchallenged. Modi has said that the errant politicians must have a “sense of apology”. But if a mere apology could help them escape punishment, politicians would be apologizing all the time. The law of the land must have a firmer grip on the guilty.

Sir — The NGO, ActionAid, should be commended for focusing on the plight of the widows of fishermen in the Sunderbans who often fall prey to tiger attacks. These women are denied compensation and face harassment from the forest department because their deceased husbands may have ventured into restricted areas, often because they had no other way to earn their livelihood. Since the Sunderbans do not come under the Forest Rights Act, the inhabitants are also denied access to forest resources. The government, which provides doles to local clubs and Puja committees, does not reach out to these hapless widows, perhaps because they do not contribute significantly in terms of votes.