Advertisement
Home / Opinion / The unbreakable bond between the US and France

The unbreakable bond between the US and France

Paris must take Trump at his word, even if he keeps changing his position 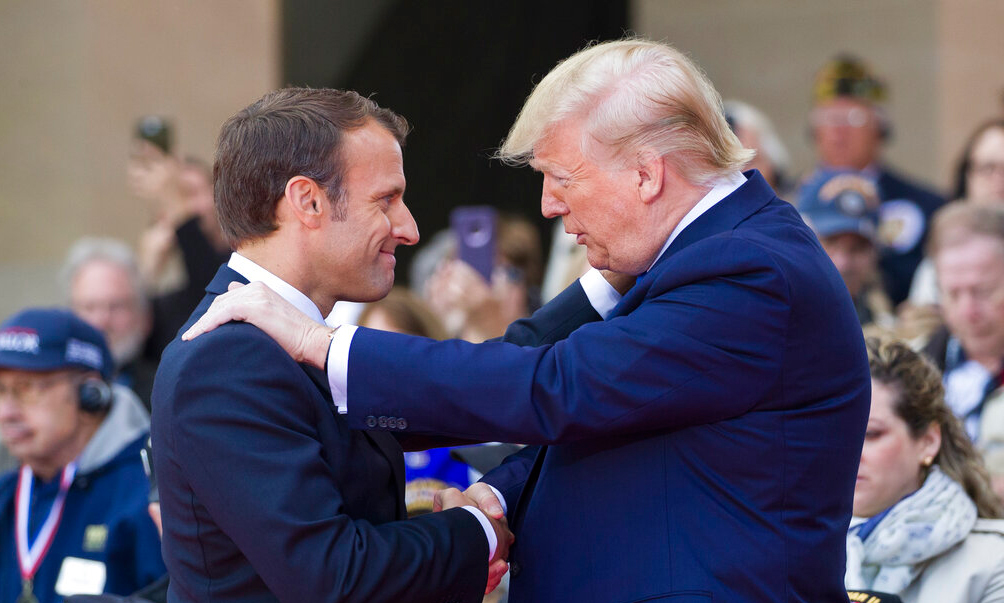 French President Emmanuel Macron and American President Donald Trump speak during a ceremony to commemorate the 75th anniversary of D-Day at the American Normandy cemetery, Thursday, June 6, 2019, in Colleville-sur-Mer, Normandy, France.
(AP)
The Telegraph   |     |   Published 12.06.19, 10:34 AM

Sir — The presidents of France and the United States of America were present in Normandy to commemorate 75 years of the D-Day landings. However, certain changes in Franco-American diplomacy were evident from the speeches made by the two heads of state.

The previous exchange between the two men dates back over six months to another commemoration on French soil. This was during the centenary of the Armistice of 1918. On November 11, 2018, under the Arc de Triomphe, Emmanuel Macron vocally opposed the idea of ‘contemporary obscurantism’ and the practice of ‘nationalism’ which betrays the essence of ‘patriotism’. He called for strengthening international cooperation through the European Union and the United Nations. Furious, Donald Trump had responded with vengeful tweets, commenting on the ‘low popularity’ of Macron. However, this time, both the leaders adopted a more sober tone. Macron stressed on the values that both France and the US were known to uphold, and the importance of keeping alive alliances of the free people through Nato and the EU.

Even though Trump’s speech was almost exclusively devoted to extolling the heroism of the war veterans, he did emphasize the unbreakable bond between the two countries. Although he seems intransigent, Trump keeps insisting on his interest in ‘a better deal’. At the D-Day commemoration ceremony, it became evident that Paris must take Trump at his word, even if he keeps changing his position.

Sir — Rouf Ahmad Dar, a young Kashmiri tour guide, sacrificed his life to save five tourists — including a couple from West Bengal — from drowning when their raft capsized on Pahalgam’s Lidder stream (“Saving lives, guide dies”, June 2). His action upholds the great tradition of Kashmiri hospitality that anyone who has visited the place can vouch for. This spirit might stem from the fact that tourism is a major source of income in the state, especially as years of unrest have shattered its economy.

Why does violence continue unabated in the Valley? Could this have anything to do with our prolonged apathy towards the place and its people? Efforts must be made to identify the faults in the system that have pushed Kashmir to the margins.

Dar’s body was reportedly retrieved the morning after the incident. On the very same day, the couple from Bengal reached Calcutta. One hopes that the tourists waited to learn about the fate of their saviour before leaving. A few years ago, an elderly boatman in Srinagar had saved three tourists from drowning in the Jhelum as their shikara capsized, but he was allegedly coaxed to risk his life to fetch a bag that had fallen into the water. The man could not make it back to the shore. The tourists, on the other hand, were seen to leave in a hurry, without taking any initiative to save him. Perhaps we owe Kashmir more gratitude than we care to show.

Sir — While terror-torn Kashmir remains at the centre of controversies, Rouf Ahmad Dar’s heroic action shows how caring the Kashmiri people are. Dar himself was from the Kulgam district which, like many other parts of the state, has borne the brunt of violence. However, it is clear that such incidents have failed to embitter Dar’s heart. It shows that the common people of Kashmir are compassionate towards all citizens.

An ex-gratia compensation of five lakh rupees was announced for Dar’s family. But this is not enough. Dar’s sacrifice should serve as an example, especially for young Kashmiris, to remind them of their great tradition of hospitality and make them feel at home in India. This would also protect them from divisive forces that seek to misguide them.

Sir — The sacrifice by Rouf Ahmad Dar has shown the path of humanity at a time when virulent criticism of Muslims and Kashmiris has become the yardstick of nationalism. Dar was indeed the embodiment of Kashmiriyat.

Sir — Calcutta’s pride has, over the years, turned out to be the city’s bane. Yet another snag led to Metro services being paralysed on Monday. Countless commuters were stranded because of the unavailability of trains. Smelling an opportunity, app cab companies decided to hike their rates, inconveniencing commuters further. The subterranean rail network is beset with problems — ageing rakes, low ticket prices, the absence of modernization are among its many warts. The only way for Metro Railways to reclaim its lost pride would be to address these limitations immediately.