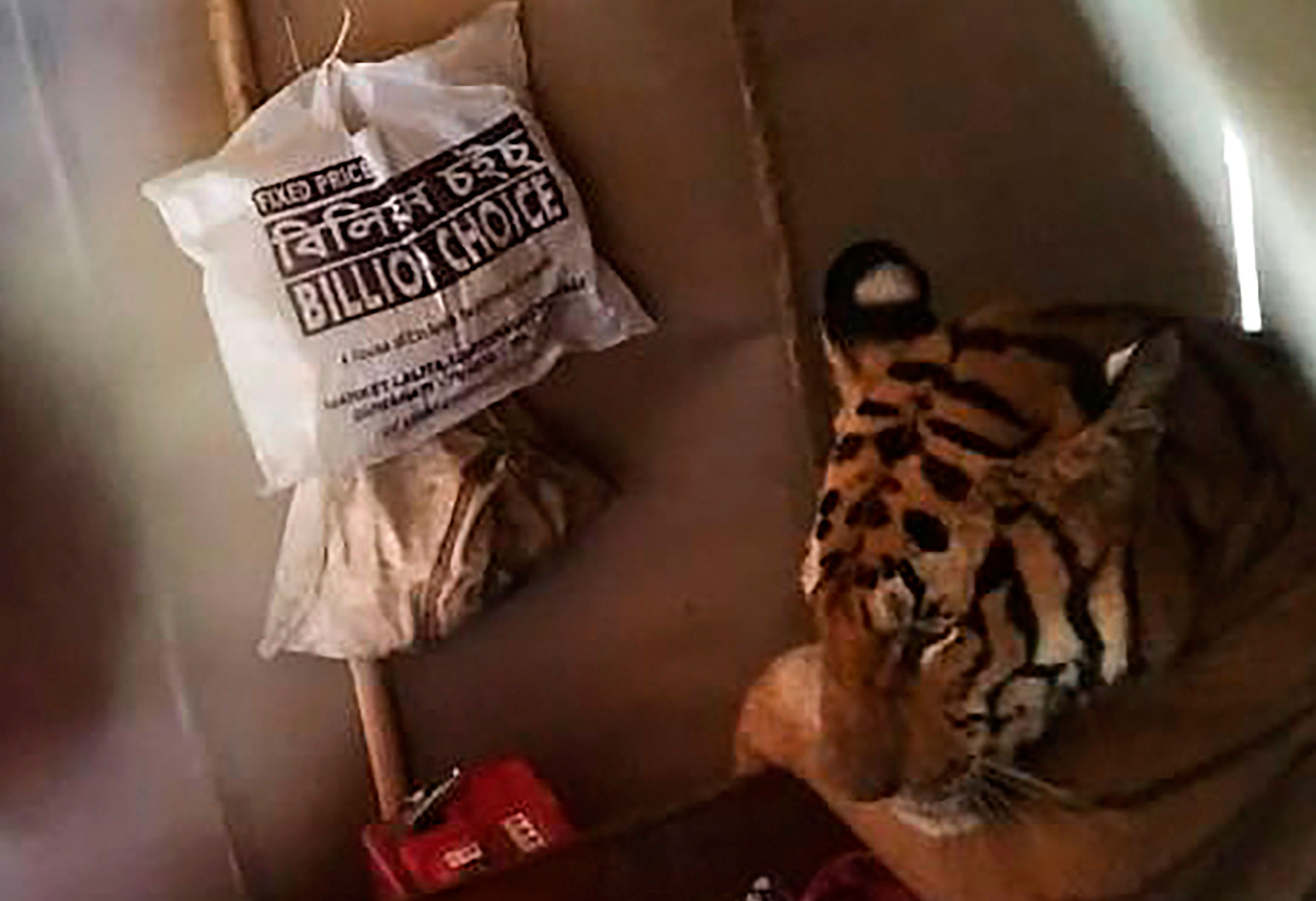 This picture of a Royal Bengal tiger on a local resident's bed at Harmoti, near Kaziranga National Park, depicts the plight of animals as Assam battles its worst deluge in a decade
Image source: Wildlife Trust India (@wti_org_india) on Twitter
The Telegraph   |   Published 23.07.19, 02:43 PM

Sir — The picture of an exhausted Royal Bengal tiger relaxing on a bed at Harmoti near the flooded Kaziranga National Park depicts the plight of the animals as Assam battles its worst deluge in a decade. The tiger fled and, in a desperate bid for shelter, entered the house of Safiul Ali, found a bed and fell asleep. He did not attack Ali when he saw him. The state’s forest department will hopefully ensure the big cat’s safety. The suffering of the animals at Kaziranga is beyond description. Over 95 per cent of the park is submerged, leaving the animals running helter-skelter for survival. The park authorities should develop several knolls across the park to help them reach safety.

Sachin Tendulkar’s induction into the ICC’s Hall of Fame is a huge acknowledgement of the batting icon’s achievements.
Telegraph file picture
Advertisement

Sir — It is a matter of pride that Sachin Tendulkar has been inducted into the International Cricket Council’s Hall of Fame along with the former South African bowler, Allan Donald, and the former Australian fast bowler, Cathryn Fitzpatrick. The Little Master’s records of 18,426 runs in one-day internationals and 15,921 runs in Tests both still stand. He will always be an idol for cricket lovers.

Sir — Sachin Tendulkar is the sixth Indian to be inducted into the ICC’s Hall of Fame. This stupendous achievement should be celebrated not just by Indians but by his fans across the world. Allan Donald and Cathryn Fitzpatrick also deserve to be lauded.

Sir — Sachin Tendulkar’s induction into the ICC’s Hall of Fame is a huge acknowledgement of the batting icon’s achievements. He is regarded by many to have been the greatest batsman after Donald Bradman. He deserves this honour for his monumental contribution to cricket. Tendulkar has not only set staggering batting records, but is also well-liked off the field.

Sir — Disciplinary measures must be effectively put in place in metro stations across Calcutta. If commuters are able to keep the premises of the stations clean, then why do they lose all sense of decorum when it comes to boarding and alighting from trains at the platforms? Does any other metro rail system in the country witness such pandemonium when a train’s doors open?

Everywhere else in India, people queue up and board the train in a civilized manner. Regular announcements on this subject need to be made till it becomes a habit with Calcuttans.

Sir — In the metro, one will invariably encounter passengers who stand like guards on either side of each set of doors of the train. These people occupy a significant portion of the space right in front of the door, thereby hindering the process of entering or getting out of the train for other people. And yet, they stand there as though they have reserved those spots for themselves. Some of these people sometimes carry backpacks, which aggravates the problem. The time taken by passengers in alighting and boarding is far more than what it would have been had the entire space in front of the doors been kept free.

The reduction in the standing space near the doors has not helped. What is required is a fine along with stiff punishment for standing next to the doors. This would help reduce the boarding and alighting time as well. Moreover, designating separate doors for boarding and alighting could also be considered. Discipline is of paramount importance. Repeated announcements, camera surveillance and prominent warnings regarding fines will go a long way in solving the problem.

Sir — The experience of the deputy general manager (Calcutta) of Larsen & Toubro, Amal Bhattacharya, in the Tokyo metro should be remembered when it comes to the situation prevailing in the Calcutta metro. In Tokyo, discipline is the key to a safe ride; in Calcutta, we experience utter chaos in boarding or alighting from a coach. In Tokyo, an official guides passengers to form a queue and keeps a watch over the people getting on to the train. There are clear signals communicated to the driver about when he can start. The same drill is repeated for each train; thus, boarding or getting out of a coach is accomplished without any trouble, although the volume of passengers is similar to that of the Calcutta metro. The latter must learn a few lessons from the Tokyo metro. Passengers should also cooperate for their own safety.

Sir — It is reassuring that the Metro authorities are trying to enforce laws which used to be overlooked. They recently fined a person for sitting on the staircase and obstructing the movement of other passengers. It is also important to fine any commuter who forcibly obstructs the automatic doors of the coaches. Standing in a queue before boarding should be made mandatory and supervised by the Railway Protection Force personnel till passengers become habituated to the practice. The unruliness of passengers during boarding prevails because they are not handled strictly.