The studied silence of Amit Shah

Some say the home minister is upset at the bad Press over the riots, others say he is not bothered 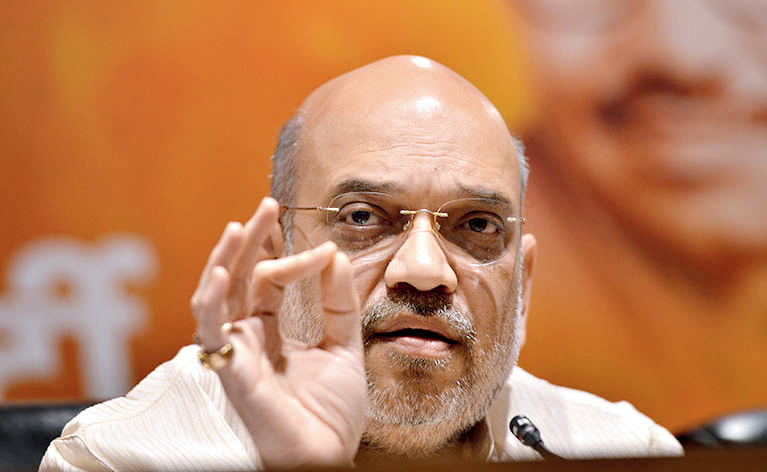 Amid the uproar and condemnation of the riots in Delhi, it was the silence of the Union home minister, Amit Shah, that was talked about in the corridors of power. True to his character, Shah showed firmness and did not make any public statement over the riots and the loss of lives. The prime minister, Narendra Modi, broke his silence after three days and appealed for “peace and harmony”. Shah, however, made no such concessions. He only retweeted the PM’s tweet. In Bharatiya Janata Party circles, Shah is seen as a ‘bold and blunt’ leader who sticks to his stand no matter what.

Party leaders feel that Shah is much more of a ‘decisive’ leader than Modi. He was hailed as the new ‘Iron Man of India’ after he piloted the two controversial legislations in a row — the abrogation of the special status hitherto accorded to Jammu and Kashmir through Article 370, and the Citizenship (Amendment) Act. “All kinds of pressure, from national to international, were exerted but Amitbhai said there is no question of going back even an inch. Our cadres want such a brave and firm leader,” said one BJP leader. Whispers in the corridors have it that the reason for Shah’s silence, however, is a reflection of his annoyance over the bad media coverage of the riots. Many media reports pinned the blame on Shah for failing to control the violence that coincided with the visit of the president of the United States of America, Donald Trump, which led to bad press across the world. Many BJP leaders differ with this opinion. “In Amitbhai’s case, his actions speak. He’s not bothered about what the media says. Just wait for the action from his part.”

Ever-ready to celebrate heroes, Kerala has one that could help the Communist Party of India (Marxist). After successfully handling two outbreaks of the Nipah virus and the latest outbreak of the coronavirus, with all three cases now cured, the health minister, KK Shailaja is the toast of the southern state. Having already won many accolades for the way she and the Left government handled the outbreaks in three successive years, Shailaja is being portrayed as the next chief minister if the ruling Left Democratic Front were to be elected again next year. The friendly, affable and motherly face would certainly give her male comrades a run for their money.

BS Yediyurappa finally shifted to the chief minister’s official residence, ‘Cauvery’, on his 78th birthday on January 27. But the Karnataka CM ensured that enough Hindu rituals and prayers were held at Cauvery before he moved in at an auspicious time. Party sources say Yediyurappa was not worried about ‘bad omens’ since PC Siddaramaiah was the last occupant of the palatial house. Their ‘friendly firing’ aside, the two leaders have developed a friendship. They never miss each other’s birthdays. In fact, Siddaramaiah was one of the VVIP guests at Yediyurappa’s birthday bash. Perhaps Yediyurappa could teach his party bosses in Delhi a lesson or two about how to respect opponents.

Priyanka Gandhi, who is the Congress’s general secretary for Uttar Pradesh East, has quietly overhauled the entire organizational machinery of the party in UP, bringing in new and younger leaders from the block to the state levels while other gen-secs are lazing around waiting for the new party president to take over. Although a section of Congress leaders are upset about the importance Priyanka has given to leaders who are either leftist or left-leaning, they are also surprised by her dedication to rebuild the party structure from top to bottom.

The entrenched elite that failed to revive the party has been pushed aside without any conflict to make way for younger elements who are directly in touch with Priyanka instead of getting bogged down with the infamous Congress bureaucracy. The new leadership is energetic and, unlike old Congress leaders, believe in the party’s potential to stage a dramatic comeback. Advisory and monitoring committees have been stationed in Lucknow; they brief Priyanka on every development on a daily basis. While the dominant opinion is that the Congress should not look for any alliance and speed up the revival process by intensifying the mass contact programme, the next stage being keenly awaited is Priyanka shifting permanently to Lucknow. Once that happens, the party plans a massive outreach to regain the lost base.

Indian journalists got a crash course on journalism from CNN’s White House correspondent, Jim Acosta, during Donald Trump’s press conference in Delhi. When asked about an issue pertaining to domestic politics, Trump raked up a correction/apology the network carried the previous day to counter Acosta. But the latter was not one to be cowed down. “Mr President, I think our record on delivering the truth is a lot better than yours sometimes.” The Indian media were gobsmacked. Imagine saying that to Narendra Modi, that too on foreign soil. This is unfathomable as the opportunity will never present itself: more than five years on, India still awaits Modi’s first press conference as prime minister.