The Red blunders: The communists have consistently betrayed national interests 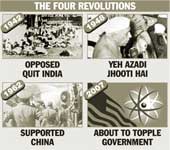 If nationalism, as the historian Jack Gallagher was fond of quipping, devours its parents, communism consumes its own ideology. Communism was born under the sign of internationalism. The project of world revolution did not recognize national boundaries. Thus, it is funny to see Indian communists today positioning themselves as great protectors of national sovereignty.

Indian communists have always had a very uncomfortable relationship with nationalism. Some of the major debates and divisions within the Communist Party of India have revolved around the question of nationalism and the national movement. And, if the truth be told, these debates do not exactly hold up the comrades in an edifying light. On the scorecard of nationalism, the performance of Indian communists is poor to say the least. (On internationalism, their score is irrelevant, since a world communist revolution is not even a pipe dream after the collapse of socialism and the exposure of the many crimes of the socialist regimes in Soviet Russia, in Eastern Europe, in China, in Albania, under Pol Pot in Cambodia and so on.)

To begin with the most notorious example that communists have never been able to live down: 1942. The CPI was officially against the Quit India movement. What needs to be emphasized here is that this decision of the CPI was not based on any understanding of the Indian situation by Indian communists. The opposition to the clarion call of 1942 was the outcome of a diktat emanating from Moscow. When Hitler attacked his erstwhile ally, the Soviet Union, in 1941, the fight against Nazism overnight became a People’s War for all communists. The directive from Moscow was carried by Achhar Singh Chinna, alias Larkin, who travelled from the Soviet Union to India with the full knowledge of the British authorities. In India, it meant communists had to isolate themselves from the mainstream of national life and politics and see British rule as a friendly force since the communists’ “fatherland”, Soviet Russia, was an ally of Britain. A critical decision affecting the strategic and the tactical line of the party was thus taken defying national interests at the behest of a foreign power, whose orders determined the positions and actions of the CPI.

In 1948, within a few months of India becoming independent, the CPI under the leadership of B.T. Randive launched the line that this freedom was fake (yeh azadi jhooti hai), and argued that the situation in India was ripe for an armed revolution. The Randive line led to the expulsion of P.C. Joshi, who believed that freedom from British rule was a substantial achievement and that, tactically, the communist movement would gain by supporting leaders like Jawaharlal Nehru who, Joshi said, represented a “progressive” trend within the Congress. Apart from the inner-party struggle, what needs to be noted here is that the Randive line, which completely misread the national mood, was the direct outgrowth of a policy formulated by the Comintern (or the Cominform, as it had renamed itself), in other words, Moscow. The directive of Moscow to the Indian communists was that Congress should be opposed since it was no more than a satellite of imperialism. The retreat from this line was also sounded from Moscow in the form of an editorial entitled, “For a Lasting Peace”, in the mouthpiece of the Cominform.

The defeat of Joshi in the inner- party struggle camouflaged an important and lasting tension within the CPI. This concerned the party’s ideological and tactical position regarding the Congress. Joshi represented a trend within the party that believed in closer ties with the Congress, especially Nehru. It argued that, given the incipient nature of the proletarian movement in India in the Forties and Fifties, it was necessary to seek an alliance with the Congress since it was the party that was closest to the masses and it had leaders who were favourably inclined to socialism and its global future. It was Joshi’s firm belief that the democratic revolution in India could be completed only through an alliance between the national bourgeoisie represented within the Congress and the CPI. While the opposite trend saw the Congress as a bourgeois party and therefore hostile to the interests of the working class and the communist movement. The Congress could not be trusted, a suspicion that was strengthened when the first communist government in Kerala led by E.M.S. Namboodiripad was dismissed by Nehru in the summer of 1959.

Three years later, in 1962, when the Sino-Indian border conflict occurred, a section of communists, among whom Namboodiripad was prominent, chose to uphold the cause of China and portrayed India as the aggressor. This was yet another occasion when the communist movement found itself isolated from the national mainstream. It led eventually to a split in the CPI with the pro-Chinese faction leaving the parent party to form the Communist Party of India (Marxist). A rump remained as the CPI — a party totally subservient to the Communist Party of the Soviet Union, and some would say even fully funded by it.

To these dates — 1942, 1948, and 1962 — when the communists chose not to serve Indian interests but to act at the behest of either Moscow or Peking (as it was then) can now be added another date: 2007. The communists are poised at the moment to withdraw support from the government led by Manmohan Singh unless the latter agrees to renegotiate the Indo-US nuclear treaty. The opposition of the communists is based not on substantial objections to the terms of the treaty, but to the fact that it brings India closer to the US. Prakash Karat, the general secretary of the CPI(M), made this clear in an article in People’s Democracy. He wrote, “The Left parties have been watching with disquiet the way the UPA government has gone about forging close strategic and military ties with the United States….The Left is clear that going ahead with the agreement will bind India to the United States in a manner that will seriously impair an independent foreign policy and our strategic autonomy.”

These, as anyone will recognize, are a series of ideological assertions and not rational arguments. The Left, since the Nineties, has lost all its ideological moorings: socialism is gone and China has turned to market capitalism; within India it has no political base anywhere save in West Bengal and Kerala. With no policies of its own, it has accepted economic reforms and begun to woo capital with some gusto in West Bengal. With everything gone, the Left clings to its anti-Americanism as a last ideological anchor. In the present context, however, the Left’s anti-US position echoes what the Chinese Communist Party is saying on the Indo-US nuclear deal. Karat, whether he likes it or not, is only parroting, like his predecessors did in 1942, 1947 and 1962, a political line coming out of a foreign country, in this case one that is hostile to India. The intensity of his opposition is a reflection of the enduring discomfort of the communists with a pro-Congress stance.

Given its track record, the Left’s attempt to see itself as a protector of India’s national sovereignty and autonomy is a disgrace. Communists in India have acted, at critical periods, at the behest of the Soviet Union or China. In so doing, communists have sacrificed India’s national interests. They are about to do the same now.

The history of Indian communism is the story of a series of historic blunders. The red flag has never fluttered because those who hold it aloft know only how to blunder. What is pathetic is that even the blunders of the communists are not their own!