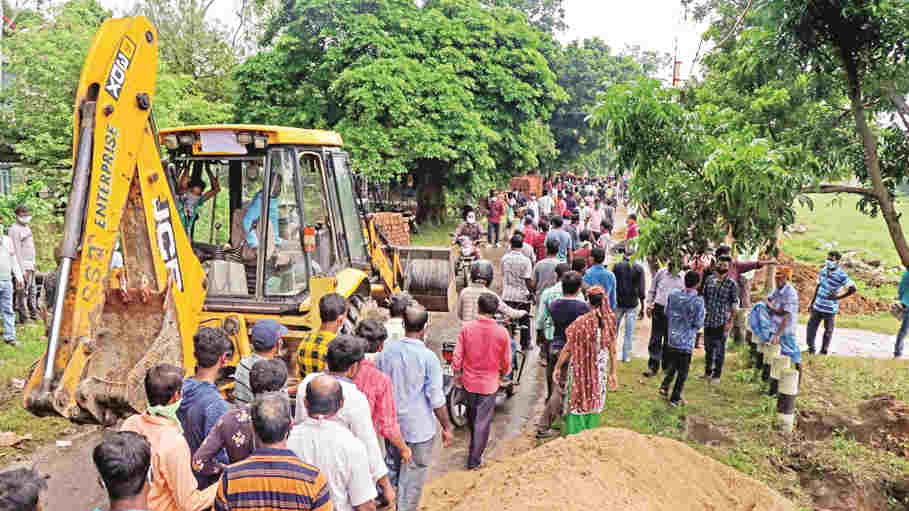 Many heritage universities across the world are accustomed to tensions between town and gown. Santiniketan, the home of Visva-Bharati, the centre of tranquillity and learning founded by Rabindranath Tagore, is no exception.

Matters came to a head last Monday when a mob organized by the Birbhum district leadership of the Trinamul Congress, the ruling party of West Bengal, went on rampage inside the campus. The crowd directed its ire at the construction site of a boundary wall that was sought to be built around a large field, which has traditionally been the venue of some iconic festivals associated with the poet, notably the Pous Mela. That this was no spontaneous gathering of people angry over needless construction in a campus established with the aim of blending nature and learning was obvious from the fact that a bulldozer was kept ready to ensure that the demolition was total. In the process, not only was the construction site vandalized and building material merrily looted, the old gates of the university were bulldozed to the ground. In view of the tensions and the clear collusion of the local administration with the local TMC, an emergency meeting of the university executive council decided to close Visva-Bharati for the foreseeable future.

At the heart of the dispute was the tension between the university and local businessmen. Over time, Santiniketan had evolved from being a quiet ashram settlement to becoming a centre of Tagore tourism. While the academic community and local residents who had gravitated to Santiniketan for its tranquil, leafy environment were understandably indignant over the invasion of the town by hordes of — sometimes unruly — tourists, local businessmen viewed tourism as a big economic opportunity.

The management of the Pous Mela epitomized the problem. The university administration felt unable to cope with the lakhs of people who descended on Santiniketan for a week or more. In particular, it was out of its depth coping with the mountain of litter, not to mention the stench caused by large areas being turned into urinals by day-trippers. The problem was compounded by the intervention of the National Green Tribunal that held the university responsible for sorting out the mess resulting from the unregulated festivities.

It was in such a situation that the university administration took a decision in 2019 to not hold the Pous Mela unless the Centre —Visva-Bharati is a Central university and the prime minister its chancellor — stepped in with financial and logistical support. Following direct appeals to the prime minister, the Centre extended support for the Pous Mela and the event, held between December 24 and 28, passed off with better crowd control and efficient waste disposal. However, there was tension between the university and local businessmen over the duration of the Mela after four days. Whereas the university adhered to the NGT instruction that the event would be for four days, the latter insisted it should continue for much longer as had become the custom in the recent past.

The political environment of the state added to the tensions. Until the general election of 2019 when the Bharatiya Janata Party emerged as a challenger to the TMC, winning 18 of West Bengal’s 42 seats, the Centre’s approach to its undertakings in the state was somewhat distant. This changed after 2019 as the BJP developed a stake in a state where its political influence had been negligible earlier. The Prime Minister’s Office, on its part, began taking a deeper interest in a university where the prime minister is the chancellor. New Delhi’s sponsorship of the Pous Mela’s arrangements — including the transparent system of online booking of the Mela stalls — was a direct consequence of these shifting equations. As a direct consequence, tensions between the TMC-sponsored local businessmen and the vice-chancellor escalated.

Some of these found reflection in an incident when an attempt was made to disrupt a university-sponsored lecture, delivered by me, on the Citizenship (Amendment) Act on January 8, 2020. What could have escalated into an ugly fracas ended after six hours following a phone call made by the Union home minister, Amit Shah, to the chief minister, Mamata Banerjee. Although the protests and the siege of the venue where the lecture was eventually delivered were allegedly the handiwork of left student bodies, the protesters melted away within 15 minutes of the call from Delhi.

Since 2019, there have been repeated attempts by the TMC to extend its political control to Visva-Bharati, which operates as a Central university. This has taken the form of employee agitations over the withdrawal of irregular privileges and vacating illegal encroachments on the perimeter of the campus. Periodically, the personal security provided to the vice-chancellor by the local police has been withdrawn and local politicians have frowned upon the university’s repeated requests to the Centre to deploy a contingent of Central security forces to protect the campus. By and large, using the Centre as a shield, Visva-Bharati has been largely successful in warding off pressures to turn yet another institution in West Bengal into an extension of a party office.

Last Monday’s ugly incident was a direct consequence of these simmering tensions. In itself, the enclosure of an open space is undesirable and not in keeping with the ethos of Tagore’s Santiniketan. That is undeniable. However, the proposed wall was also a direct consequence of the NGT order of November 1, 2017 that “a barrier needs to be constructed to demarcate the Mela ground from the University and locality.” The NGT had, in fact, directed the university to show visible progress of the construction before its next hearing on August 19. Whether or not it will proceed with contempt charges against the MLA from Dubrajpur and others who mobilized the protesters and disrupted the work on the boundary wall is worth observing.

Safeguarding the authentic heritage of Tagore is an objective that, while being lauded all over India and not least in West Bengal, is also a point of fierce contention. In her press interaction on the afternoon of the incident, Mamata Banerjee made clear her emphatic opposition to the construction of the boundary wall. Equally, she had no words of condemnation for the mob action in Santiniketan and did not mention the fact that even before the incident the university had requested the district administration to declare Section 144 in the area. It was apparent that behind the façade of heritage protection, the state government was using Visva-Bharati to fight a proxy battle against the Centre. In sending bulldozers to complement a political mobilization, it very successfully underlined the limits of the Centre’s powers inside West Bengal. It is even possible that she will take the muscle-flexing a step further by positing a contrived battle between a regime that protects and safeguards the heritage of Bengal’s greatest cultural icon and an uncaring Delhi that seeks to trample on Bengali sensitivities. As the assembly election of 2021 approaches, the chief minister will seek to assume the mantle of Mother Bengal fighting a valiant battle to keep out the barbarians from the North.

As a political strategy, it may or may not divert attention from her whimsical — and increasingly venal — record of governance. However, what every incident, such as the one in Santiniketan, does is confirm West Bengal’s unending decline. It also makes a likely recovery imperative.