Advertisement
Home / Opinion / The poet and the party: Ramdhari Singh Dinkar and the BJP

The poet and the party: Ramdhari Singh Dinkar and the BJP

How and why are the poems of a Nehruvian poet being used to endorse the politics of a right-wing political party? 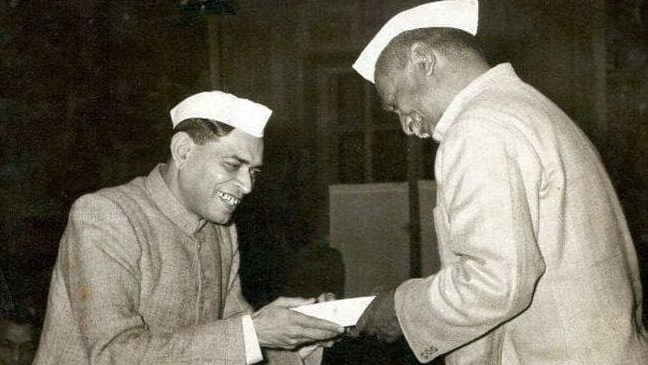 Politics appropriates everything — the real and the abstract — for expanding its horizon. It may even appropriate poetry. When a politician uses poetry, it can be interpreted in three ways. First, he uses it as an instrument to disseminate political messages; second, it symbolizes the appropriation of the poet by a political party; finally, politicians and political parties use poetry that fits in with their ideologies.

When the prime minister, Narendra Modi, visited Ladakh, he chose to inspire the Indian army by reciting a poem by Ramdhari Singh Dinkar (“Kalam Aaj Unaki Jay Bol”). Incidentally, Modi has referred to Dinkar’s poetry on various occasions. Atal Bihari Vajpayee, Sushma Swaraj, Rajnath Singh, Amit Shah, among other leaders of the Bharatiya Janata Party, have used Dinkar’s verses to get across their political messages. Many pracharaks of the Rashtriya Swayamsevak Sangh have been known to use Dinkar’s poems during lectures for swayamsevaks and in their articles for Panchjanya and Organizer.

Significantly, Dinkar was a Congressman. He was very close to Jawaharlal Nehru. The Congress retained him as a Rajya Sabha member between 1952 and 1964. After the completion of his stint, the Congress appointed Dinkar as a Hindi advisor to the Government of India. Dinkar was steeped in the Congress’s vision of Gandhian nationalism and believed in protest for the sake of freedom with humility and satyagraha. Dinkar’s famous works — Sanskriti ke Char Adhyay and Lokdeo Nehru — reveal his belief in the Gandhian and Nehruvian visions and the idea of India. Dinkar used the veer ras to express his nationalist sentiments in his poems. This has enabled the BJP and the sangh parivar to appropriate Dinkar to spread their version of nationalism, which is deeply influenced by V.D. Savarkar’s interpretation of Indian nationalism.

How and why are the poems of a Nehruvian poet being used to endorse the politics of a right-wing political party? Is this merely an instrumental strategy? Does it signify the appropriation of the poet to appease his caste for electoral gain? Or is this indicative of larger issues at stake?

Dinkar’s poetry is characterized by aggressive posturing. It contains appeals of being chivalrous and demands strength to defend the nation. These elements are attractive to the BJP. Dinkar’s poetry is consistent with the ideological tenets of Hindutva politics, which believes in the notions of a strong community and a strong nation. The political message of the right wing in India rests upon the encouragement of the cadre to become ‘veer’ — chivalrous — to defend the nation. Many of the speeches in this ecosystem are thus set to chivalrous, lyrical tones and tunes inspired by Dinkar’s poetry.

A number of stalwarts of the BJP — Vajpayee, Vishnu Kant Shastri, Ramesh Pokhriyal — who have gone on to acquire the image of a poet have been highly influenced by Dinkar’s poetry as well as by his poetic forms. Other nationalist poets from the Congress stable, contemporaries of Dinkar, are quite popular in the Hindi heartland. But their works lack veer ras and feature the vinay bhav (humility). That is why their poems are deemed unsuitable for the BJP’s political language.

The strategy employed by the BJP-sangh parivar to effectively communicate with those at the grass roots relies on the use of mythical characters from such ancient literature as the Vedas, Puranas and ballads like the Ramayana and the Mahabharata. Dinkar’s poetry made substantial use of myths and epics too, reinventing his messages around these works to evoke an aggressive form of nationalism.

It is rare to find a Congress leader making use of Dinkar’s poems. But the BJP organizes functions in Dinkar’s memory and has celebrated his birth anniversary in the recent past in various parts of Bihar. This may appear to be a plan to garner electoral gain. But Dinkar’s appropriation by the sangh parivar is better explained by the shared vision between the poet and the political party.