Pakistani media are being controlled and financially crippled

The media team (read trolls) of the ruling party has tried to discredit media critics of the party and its leader, Imran Khan 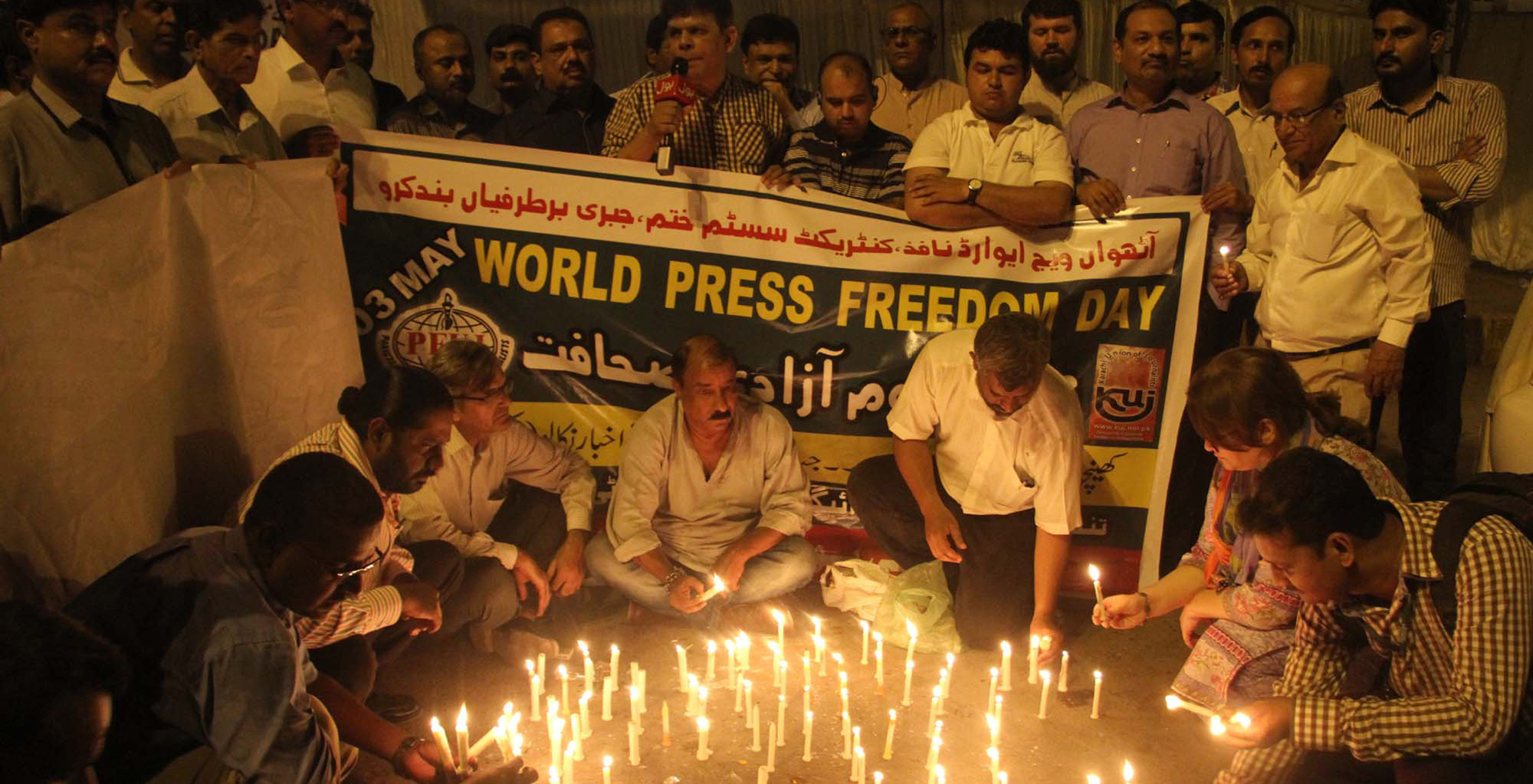 Journalists at a candle light vigil to pay tribute to slain journalists and media persons, on the occasion of Press Freedom Day on May 03, 2017 in Karachi.
Shutterstock
Mehmal Sarfraz   |   Published 08.02.19, 03:56 AM

‘Do nahin, aik Pakistan (not two but one Pakistan)’ is a slogan of the ruling Pakistan Tehreek-e-Insaf. This slogan is meant to be inclusive, and basically means that there would be no discrimination on the basis of class, caste, creed, religion and so on. But if truth be told, there are, in fact, two Pakistans for many Pakistanis — one for those who flout the law and get away with it and the other for those who are peaceful but are still treated like criminals, one for the religious minorities like the Ahmadis and one for those who misuse religion but are not punished. There are countless other examples of this disparity.

One such example is the ham-handed manner in which a rights movement is being treated in Pakistan. The Pashtun Tahafuz Movement, a movement asking for the rights of the Pashtun community, is now being dubbed as anti-State and also faces a media blackout, except for an odd mention here and there. This agitation is being led by a young, charismatic leader: Manzoor Pashteen. It came into the media limelight after the extrajudicial murder of a young Pashtun, Naqeebullah Mehsud, in Karachi by an infamous encounter specialist, Rao Anwar. Apart from seeking justice in Mehsud’s case, the PTM had some other demands as well. Initially, the Pakistani military tried to engage with the PTM leadership. But as the rights movement gained strength, there was a backlash from the State because the PTM was vocally extremely critical of the military. Soon, we saw a campaign against the PTM on the social media as well as the mainstream media, followed by a media blackout.

Arman Loni, a senior member of the PTM, was recently killed in a police crackdown during a peaceful sit-in in Balochistan. It led to protests all over the country by Pashtuns and rights activists. But the State’s high-handed approach did not end there. Dozens of protesters were arrested in Islamabad — some of them are still in custody.

A report in the BBC about these arrests has the following headline: “A protest Pakistan wants to hide from the world”. I disagree. I think that this is not something Pakistan wants to hide from the world; we just want to hide it from our own selves. An ostrich-like approach is something we Pakistanis are all too familiar with. We try to live in denial; our State tries to hide facts from its own citizenry and paints dissenting voices as anti-State. This is a dangerous path to tread on as it leads to resentment. Controlling the media and asking them not to report on the PTM is something that will not work in the long run. In an age of social media and technological advancements, it is silly to think that such news will remain unreported.

In a bold verdict authored by Justice Qazi Faez Isa of the Supreme Court in the Faizabad dharna (sit-in) case, the top court admonished the military for meddling in politics and controlling the media. “The Constitution emphatically prohibits members of the armed forces from engaging in any kind of political activity, which includes supporting a political party, faction or individual... If any personnel of the Armed Forces indulges in any form of politicking or tries to manipulate the media he undermines the integrity and professionalism of the Armed Forces,” reads the verdict.

Censorship is nothing new for the media in Pakistan. We have seen censorship in the times of military dictatorships. While our seniors talk about censorship during General Zia ul-Haq’s times, we remember the censorship when General Pervez Musharraf imposed Emergency just a little over a decade ago. We are all too familiar with self-censorship as well when it comes to certain ‘holy cows’ and sensitive issues like religious debates. There are some defined and some undefined ‘red lines’. Columns are dropped because they somehow cross certain ‘red lines’; columnists are asked to stop writing because they have stepped on the toes of the powers that be; television programmes or interviews are not allowed to go on air if they are seen as being too critical of powerful State institutions.

The PTI government has in its own way supported the military in cracking down on the Pakistani media. The PTI’s media team (read trolls) has tried to discredit every media person critical of its party and its leader, Imran Khan. Now the party leadership itself has resorted to such attacks in the mainstream media. Any journalist critical of them is labelled ‘lifafa’ (someone who takes money) and/or pro-PML-N. This new media strategy of bullying journalists is not something that the Indian media are unfamiliar with, given how the Narendra Modi government has castigated media organizations opposed to it and/or how Donald Trump deals with liberal media organizations. The PTI has taken a leaf out of the Modi/Trump book.

As a media practitioner, it is extremely sad for me to see how the media are being controlled and/or being financially crippled. Dissenting voices are now mostly heard on the social media. Now the State wants to crackdown on the social media as well through a new media regulatory authority that will control all media, including digital/social spaces. Although this plan is still in the works as the draft bill has been opposed by all media bodies and organizations, it is only a matter of time before the government finds a way to do it formally.

The Pakistani media are trying to fight back in their own way.

Here is hoping that our media can win against a government that is backed by the most powerful State institution.