Advertisement
Home / Opinion / The music of the people: Protest songs

The music of the people: Protest songs 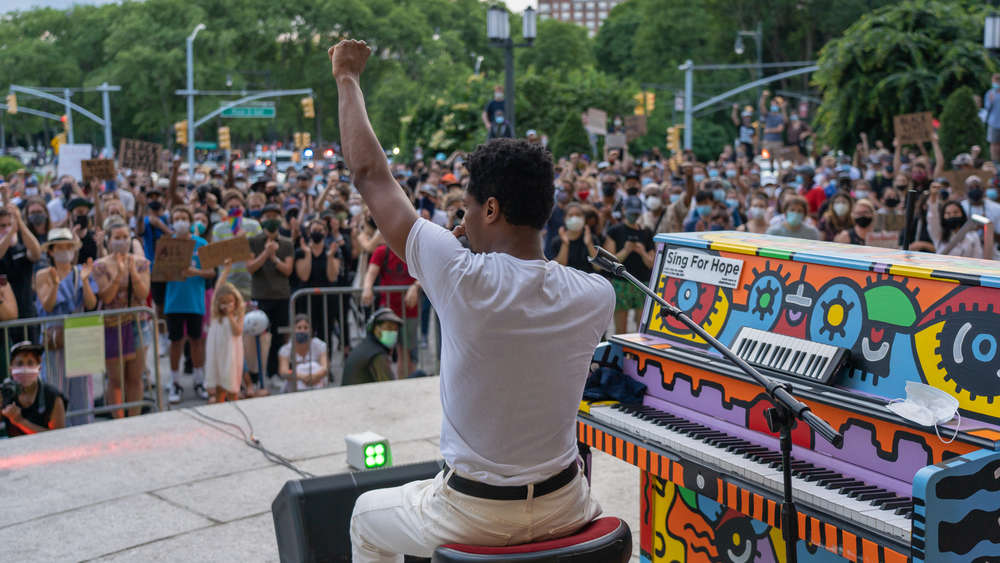 Musician Jon Batiste speaks to gathered crowds between songs as he performs live on Juneteenth on the steps of the Brooklyn Public Library at the Grand Army Plaza.
Shutterstock
Samir Nazareth   |   Published 15.10.20, 03:14 AM

It’s rare for protests not to have an anthem. Anthems are an effective way of communicating the demands and the philosophy that drive protests. They create a leitmotif that can be recalled for a new generation of protesters in the future.

The 19th-century folk protest song, “Bella Ciao”, sung by the Mondina women, became an anthem for the anti-fascist partisans during World War II. This song has not only traversed time, causes, and medium but has also transcended geographies and languages: there is even a Kannada version of “Bella Ciao”. “Un Violador en Tu Camino (A rapist on your way)”, a song-and-dance performance composed by Las Tesis, a Chilean feminist collective, is now an international anthem for feminist protests. Hong Kongers have used old and new songs as protest anthems against the Chinese. From “Sing Hallelujah to the Lord”, a Christian hymn composed in 1974 by Linda Stassen-Benjamin, to the recent “Glory to Hong Kong” exemplify the spirit of the protesters there.

Anthems ring true because societies continue to experience repression, injustice and inequity. These shared experiences shrink time and space, enabling the lyrics to resonate with protesters the world over. Anthems strengthen the resolve of protesters because they provide them with a sense of belonging to something that is larger than them and their moment. Thus, songs like “Do You Hear the People Sing?”, from the screen and stage adaptation of Les Misérables and now sung by protesters in Hong Kong, evoke the sentiments of the French Revolution that was led by commoners against a powerful establishment. Conversely, China’s imposition of the draconian national anthem law on Hong Kongers shows that anthems can also be used to suppress dissent.

Not all protests draw inspiration from internationalism. Protests also seek motivation from home. In the United States of America, protest songs have stuck to their American roots. The Occupy Wall Street Movement tapped into the protest songs of the 1960s — Bob Dylan’s “Blowin’ in the Wind” and Woody Guthrie’s “This Land is Your Land”. The Black Lives Matter movement may not have a protest anthem yet, but participants have sung Ben E. King’s “Stand By Me” along with songs by local Rap artists. One reason for this choice could be the insularity of Americans. The other is the US’s rich history of protest.

In India, there are protest songs that reflect the anger and the hope of the youth standing up to the Bharatiya Janata Party’s imposition of the Citizenship (Amendment) Act and its plan to conduct the National Register of Citizens. “Hum Kagaz Nahi Dikhayenge (We Will Not Show Our Papers)” was a direct response to NRC.

But there is one song that mobilizes every Indian: the national anthem. India’s national anthem evokes pride for many reasons. It creates the imagery of India’s military might and sacrifice, acknowledges the diversity of the nation, echoes the freedom movement, and is also a benediction by citizens for the well-being of the land and its residents.

The prevailing majoritarian ethic ignores this element of diversity that the national anthem glorifies. Instead, it demands uncritical acceptance of a unilateral understanding of who is a citizen. Matters, unfortunately, were made worse by the honourable Supreme Court. To instil “committed patriotism and nationalism”, the court ordered movie theatres to play the national anthem before the screening of films. The order was reversed in 2018 by the court but the practice remains prevalent.

The singing of the national anthem has also been used by the regime to identify ‘anti-nationals’. In the early days of the anti-CAA protests in Bangalore, a police officer asked a group of peaceful protesters to sing the anthem to weed out ‘anti-national’ elements who could instigate violence. Again, during the alleged targeted violence against Muslims in the Delhi riots, the police, after brutally assaulting some Muslim men, asked them to sing the national anthem. The anti-CAA protesters singing the national anthem may have also pre-empted the government and its supporters from portraying dissenters as being ‘anti-India’.

Anthems are inspiring cultural commentaries and are, therefore, timeless. They embody the soul of a movement. In India, protesters singing the national anthem reaffirm their commitment to the secular ideals of the nation and remind those in office of their oath to protect the Constitution.