The ghost who still walks 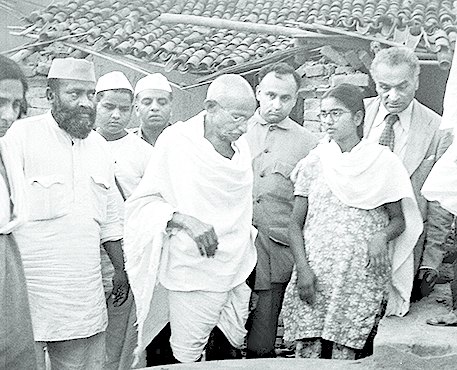 This is a book that produces a lasting after-effect, and not just because of all the complex psychoanalytic jargon that leaves the mind reeling. This is because Makarand Paranjape, by what can be described as a coup of sorts, does manage to put back Gandhi on a place that is his alone, and, at the same time, steal the thunder of the Hindu Right who have been pitching to have his assassin, Nathuram Godse, literally worshipped in temples.

Paranjape chooses a peculiar entry point into the Gandhi versus Godse battle - the death of the Mahatma. Godse believed, as do his followers, that he acted as the true son of Hindu India by killing the 'Father of the Nation', who had wronged the motherland by enfeebling her with his principle of non-violence. This service made him a greater Hindu than Gandhi, who betrayed the nation by befriending Muslims.

Paranjape denies him, and all those who believe in Godse, that satisfaction. Godse, he argues, did not even act like a Hindu. Killing the father was inadmissible in Hindu tradition. Paranjape delves deep into the classics, myths, legends and folklore as well as the scholarly works of India's early-modern and modern philosophers to establish that what Godse had done, in fact, was a breach of the hoary Hindu tradition. Godse's cold-blooded rationalism and individualism that led him to the "un-Hindu" act of patricide may have established his modernity though. In that case, he was more a product of India's colonial experience than its centuries-old tradition.

But undoing Godse is not Paranjape's central focus. Godse is just part of a larger project that is, by any standards, a pretty unconventional one. Paranjape uses the Mahatma's death to lead his readers into a bewildering array of possibilities - could the Mahatma have scripted his own death? Could he have turned the tables on his assassin? Could he have ensured, through the way he died, that his ideas would not die with him? Could he have fashioned India's future existence as a plural, secular nation through his death? Could he have shaped the idea of India?

If Paranjape's project is unconventional, so are his ways of exploration. He finds the Indian obsession with the Mahatma's life a sure indicator of the discomfort about his death. He traces this to the trauma of patricide that profoundly affected the Hindu psyche and the other trauma of fratricide during Partition. The discomfort about these twin traumas at the hour of the birth of the nation is so strong that the memories have been firmly repressed. Paranjape finds clear evidence of this in the two memorials dedicated to Gandhi in the capital. In Rajghat, the repression has led to a complete obfuscation of the incident of death. At the Gandhi Smriti, visitors are made to dissociate themselves from the discomfort of seeing Gandhi's footsteps stop abruptly on the grass lawn where he took the bullets and concentrate instead on the celebration of his life through the "ultra-high-tech, almost postmodern exhibition" that brings home his message to the contemporary generation.

Paranjape forces the reader to look into the death of the Mahatma and what it symbolizes. He believes that the Mahatma scripted his own death as a ritual offering in a " yagna" (Gandhi's own word) to pacify the monster of Hindu-Muslim hatred that burst out in the unending riots that threatened not merely the sovereignty of India, but also its very survival. Gandhi was thus one up on his assassin. Godse might even have been an unwitting agent of Gandhi as he sought to carry out his last mission.

Through this last act of his, which was carried out neither under depression nor delusion, Gandhi proved that he could still make a difference to the polity that had almost forgotten him. He could still lead the people of the nation into embracing higher ideals. Not surprisingly, his one act - the death he devised - stopped the conflagration in Delhi that the State forces had failed to contain. The peace, Paranjape points out, still, broadly-speaking, holds in both Bengal and Delhi. Thus, through the violence of his death, Gandhi ensured the survival of his ideas of amity, truth and non-violence.

A close reading of Gandhi's statements, letters and even casual utterances, helps Paranjape dispel several myths. For one, the Hindu Right construct of Gandhi deserving death for choosing Muslims as his friends disregarding the suffering of Hindus and Sikhs. Gandhi, in the days preceding his death, is seen to repeatedly insist that his befriending of Muslims did not mean that he was ignoring the suffering of the other communities. He only insisted that the warring partners stop indulging in reciprocal violence. Paranjape also shows that Gandhi's emphasis on ahimsa did not automatically mean he was enfeebling India, as the Hindu Right assumed. He points to Gandhi's allowance for violence in self-defence (against Pakistan for example), provided it was principled, disciplined and responsible.

It is because of his death, Paranjape suggests, and the significance of his ideas that his death reaffirmed that Gandhi retains his spectral presence in India. Even after his death, he is someone who cannot be ignored. Not surprisingly, the Bharatiya Janata Party, Paranjape argues, has had no qualms in embracing him.

But Paranjape has a bigger project in mind. He wants to reopen the discussion on Gandhi's death not only to rid India of the trauma that it has repressed through a collective acceptance of responsibility, but also to revisit Gandhi's ideas so that the country can use its transformative potential to evolve into a better nation peopled by better human beings. This power of Gandhi's ideas - that cannot but create a chemical locha or dissonance in the brain - was evident in the transformation of Munnabhai in the record-breaking Bollywood film, Lage Raho Munnabhai. In an incisive and entertaining discussion on the afterlife of Gandhi on celluloid, Paranjape cites the Gandhigiri of Munna bhai as the way Gandhi could still be part of the nation's "lived experience and reality".

Paranjape has undoubtedly made a path-breaking study in an area that was thought to have been done to death. But there are things that are jarring. One, Paranjape seems to have got carried away by what appears to be an unnecessary exploration of "schizoanalysis". Two, the verbiage over Hindu traditions and rituals and the insistence that the discomfort over Gandhi's death is essentially a Hindu problem conjure up the nation as a Hindu rashtra. Godse's followers and other deluded souls would love Paranjape for the back-handed advantage he grants them. Surely that is not Paranjape's intention?