Advertisement
Home / Opinion / The First World War was our war too

The First World War was our war too 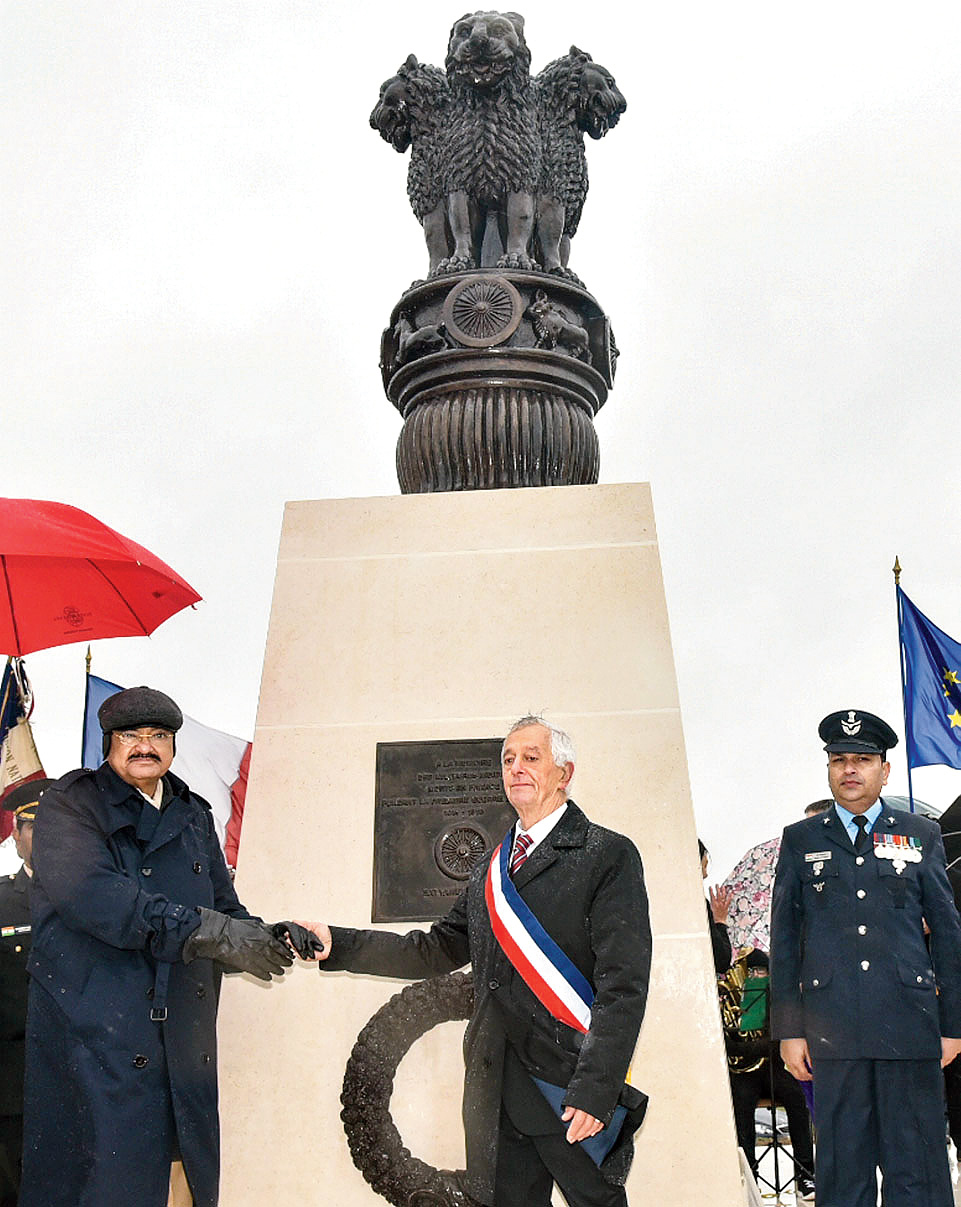 In an age where controversies are never in short supply, it is surprising that India’s enhanced participation in the Armistice Day centenary commemoration in Paris on November 11 provoked no outrage, either real or contrived. Nor was there any adverse comment over the inauguration of a war memorial by the vice- president, M. Venkaiah Naidu, at Villers Guislain in France honouring soldiers of the British Indian Army who died in the Great War of 1914-18. What is particularly interesting is that the memorial was funded by India, a clear sign that the achievements and sacrifice of the British Indian army, at least in World War I, are now part of the official narrative.

The shift in official attitudes has been particularly marked under the Narendra Modi government. The prime minister led the way in April 2015 when, accompanied by the French defence minister, he placed a wreath at the Indian war memorial at Neuve-Chapelle. Subsequently, the valour of the Mysore Lancers and the Jodhpur Lancers in the capture of Haifa from the Ottoman troops in September 1918 has been further commemorated by renaming New Delhi’s Teen Murti Chowk — the site of the memorial to the Imperial Service Cavalry Brigade — as the Haifa-Teen Murti Chowk. Since the Battle of Haifa and the courage of Major Dalpat Singh Shekhawat — awarded the Military Cross posthumously — is a part of modern Israeli folklore, the move was principally governed by considerations of India-Israel friendship. In time, the original objective of the iconic India Gate in New Delhi — as a memorial to the fallen Indian soldiers in the Great War and the Afghan campaign of 1919 — will also come to be spoken of in less hushed tones.

It has taken Independent India a long time to even try and come to terms with the zigzags of its contemporary history — the pre-modern past continues to be fiercely contested. This is not surprising. Where the values of the past are in direct conflict with the national story of the present, there is a tendency to either gloss over or live in denial of awkward histories. There is a spirited, if over-polemical, debate in Britain over the British Empire that includes an unfortunate tendency to judge the past in the light of today’s political correctness. Last year, Oxford University’s Regius Professor of Theology, Nigel Biggar, was at the receiving end of a hate campaign mounted by both historians and students for daring to suggest that Britain’s record of Empire was “morally mixed” and that the positive dimensions should not be overlooked.

The storms over the past are likely to be even more fierce in nations that have confronted defeat in the recent past. In the immediate aftermath of World War II, there was a tendency to view the new post-1945 start as Year Zero, implying a curtain over what transpired before. Although the silence that marked a generation that had participated in Hitler’s excesses has ended, there is still a great deal of either embarrassment or exaggerated hand-wringing over the fact that the Nazi regime was not built on coercion alone. Yet, the loss of German territories in the east and the mass expulsion of ethnic Germans from regions that constitute today’s Poland, Slovakia, Czech Republic and the Baltic countries are hardly ever mentioned in polite conversation.

The awkwardness in France is also quite marked. After 1944, General Charles de Gaulle helped create a satisfying mythology of a France that had resisted the Nazi occupation of the country resolutely and had finally liberated itself — with some help from the British and Americans. This mythology was necessary to overcome the shame the French felt over the grim reality of an official policy of “collaboration” that was managed by the Vichy regime headed by Marshal Pétain — the hero of the Battle of Verdun in World War I. To believe that the Vichy regime was a puppet government established by the German occupation forces is to misread history. In 1940, after the military defeat, the overwhelming majority of the National Assembly endorsed the leadership of Pétain and authorised him to negotiate a peace. The French State did not collapse in 1940. The structures of administration were kept going by the very same officials who had served the Fourth Republic, except that they now swore allegiance to Vichy. Yes, there was a French Resistance but there was also popular support for Pétain, at least until 1943. The Vichy National Revolution was not born out of thin air.

The ambivalence in India over its colonial past has been comparatively less troubling. The transition from British rule to Independence was accompanied by the rupture of Partition. However, apart from the migration, dispossession and killings in the east and west, the changeover was gradual and painless. People and institutions that had propped up British rule changed their allegiance without fear and recrimination. The Indians in the Indian Civil Service kept their jobs and privileges, as did the police and the armed forces. The measure of continuity was remarkable and there was not the slightest hint of recrimination and revenge.

The most profound shift was in the national memory. Post-Independence, there emerged a new history of a people unreconciled to foreign rule that had pushed the colonial power out after a valiant struggle that began in 1857 and concluded 90 years later. Like most histories, this narrative was centred on partial truths. What was understandably understated was the extent of collaboration that sustained British rule. It can be said, without fear of serious contradiction, that between the bloody suppression of the 1857 uprising and Mahatma Gandhi’s Non-Cooperation movement of 1921-22, British rule enjoyed a spectacular measure of both legitimacy and acceptability. There may have been localised grievances and persistent demand of educated Indians for a greater say in public life but neither the reality of autocratic rule and humiliating instances of racism can take away from the fact that British rule was seen to be a part of the natural order of things.

The war that began in 1914 and quite unwittingly spun out of control was never India’s war. Few Indians identified with either Belgian neutrality or felt any distaste for the Kaiser. Among a section of orthodox Muslims there was, in fact, an emotional connect with the Ottoman Empire and the Caliphate. But none of these doubts was sufficient to derail the large-scale mobilisation of men and resources that followed the declaration of war. Among the so-called ‘martial races’ — the catchment area for the British Indian army — the wave of recruitment in fact opened up new opportunities. Above all, there was no significant element of doubt over the need to safeguard the British Empire. This consensus included the princely states that contributed substantially to the war effort both in terms of men and material. It was in this context that Indian soldiers saw action in France, Belgium, Palestine and Iraq. During the entire course of the Great War and, indeed, till the Jallianwala Bagh massacre and the subsequent Khilafat and Non-Cooperation movements, the legitimacy of the rule of the King-Emperor was unchallenged.

It is unlikely that an acute awareness of the specific historical circumstances of the Great War played any role in the Modi government’s increasingly pro-active role in honouring Indian soldiers. That, however, is beside the point. What matters is that in evolving a new awareness of history India has to move beyond slogans. Last week, in Paris, the world’s leaders were present to commemorate the end of a horrible war. It was important that India was there too. It was our war too.