The attraction for spectacle explains the durbar’s appeal to leaders

Modi has also kept an eye out for fresh blood, inducting as many as 23 new faces into his council of ministers 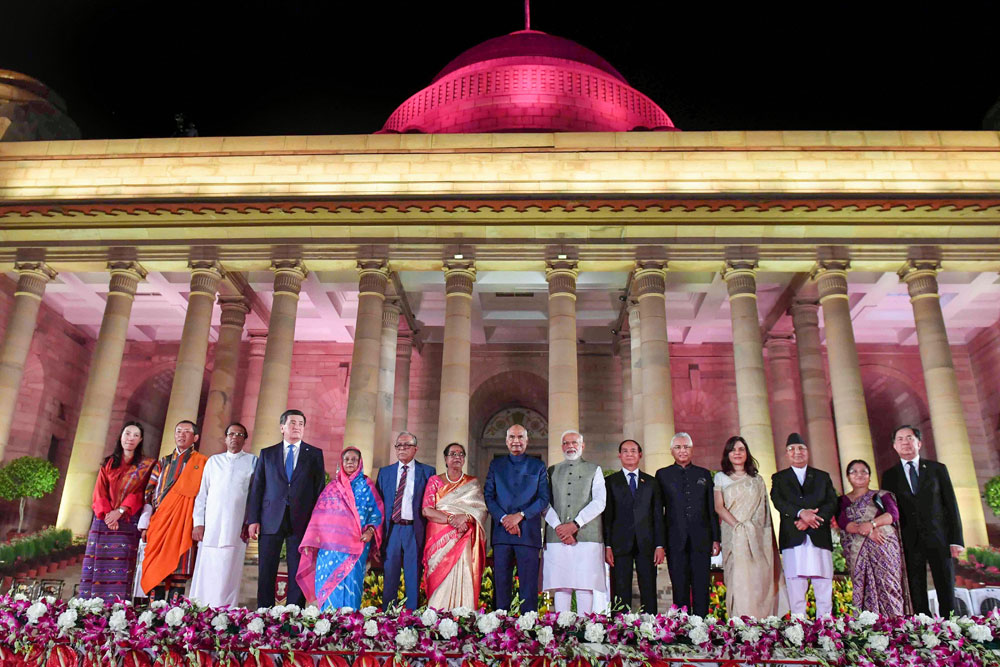 President Ram Nath Kovind and Prime Minister Narendra Modi with foreign heads of state and dignitaries at Rashtrapati Bhavan on Thursday. The practice of swearing in new governments amidst glitter and pomp that was begun by Modi arguably has a touch of the durbar of yore
Picture by PTI
The Editorial Board   |     |   Published 01.06.19, 06:41 AM

Delhi has been synonymous with the durbar. The Mughals held court in the city for years. The Delhi durbar then changed hands with the British organizing the durbar three times to commemorate the succession of a new emperor or empress. Old India may have mutated into the new but the durbar continues to flourish. The practice of swearing in new governments amidst glitter and, naysayers would add, pomp that was begun by Narendra Modi — he has started his second term — arguably, has a touch of the durbar of yore.

The attraction for spectacle perhaps explains the durbar’s appeal to leaders who are invested with power — imperial or democratic. The durbar remains an occasion of demonstrating the supremacy of the sovereign. It is also a time for bestowing largesse. Both impulses have remained unchanged. The fact that Mr Modi, the first prime minister to return to power with a decisive majority after Jawaharlal Nehru and Indira Gandhi, now towers above India’s political landscape is indisputable. His persona towers above all parties, including his own. He is, in a sense, the sovereign, albeit in a democracy. A benevolent sovereign knows well the importance of rewarding his subjects.

Mr Modi’s wisdom is formidable in this respect. His trusted lieutenant — the chief architect of the Bharatiya Janata Party’s well oiled political machinery — now has cabinet rank. Mr Modi has also kept an eye out for fresh blood, inducting as many as 23 new faces into his council of ministers. The prime minister has also striven to be merciful in his grand hour. A junior minister of agriculture, a sector that has been reeling from one crisis to another, has earned a promotion. Of course, even the kindest of sovereigns cannot prevent party poopers from grumbling. The BJP’s principal ally in Bihar, for example, is in a huff over ministerial berths. There are rumblings in Bengal too. The state gave Mr Modi 18 seats; Mr Modi has given the state two ministers of state.

But the fault does not lie with Mr Modi. He, evidently, had other matters on his mind. Combining a public function with foreign policy seamlessly, the prime minister has, as always, chosen to extend courteous invitations to leaders from India’s neighbourhood. Mr Modi has apparently looked towards the east in this context. Dignitaries from Myanmar and Thailand graced the occasion, as did those from Nepal, Bhutan, Sri Lanka and Mauritius. India’s western neighbour, the key to several knotty problems in the subcontinent, was denied Mr Modi’s warm embrace.

But every party must come to an end; so must durbars. Mr Modi must lead the charge to resolve several problems confronting India with his mint-new ministers bringing up the rear. The economy is in tatters; industry captains, some of whom were present at the show, are far from cheerful ; there are clouds on the international horizon, and most distressingly, India remains markedly polarized. The possibility of a third durbar hinges on Mr Modi’s success on these fronts.