The AIMIM and Indian secularism 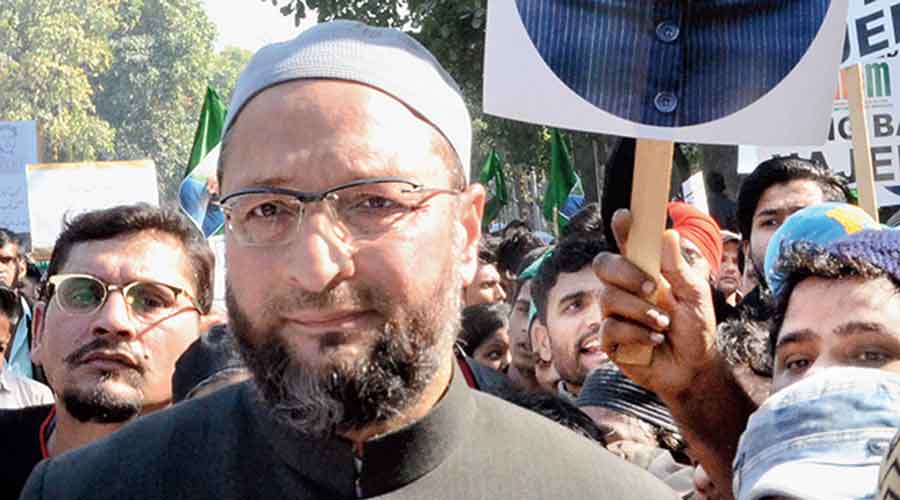 Asaduddin Owaisi, who was a Muslim leader confined to Hyderabad, is now staking a claim to become an all-India Muslim leader. He is being credited with bringing back the question of political representation to Muslims who have been witnessing a steady marginalization. Is the decline of Muslim representation the truth about Indian secularism or is the rise of Owaisi and his party, the All India Majlis-e-Ittehadul Muslimeen, the result of Indian secularism? Is voting for the AIMIM any different from voting for the Bharatiya Janata Party? Is it not true that the consolidation of the Muslim vote for a Muslim party, moving away from the Congress and the regional parties, results in the consolidation of the Hindu votes for the BJP?

The rise of the BJP on a polarized narrative made it difficult for other parties, including the Congress, to not be accused of appeasement. In response, most of them resorted to what is known as ‘soft Hindutva’, avoiding explicit support to Muslim-related issues of culture, identity and social opportunities. The BJP not only polarized the elections but also gained by accommodating wider representation among subcastes within Dalits and the OBCs. As a result, the BJP expanded its social base, created a pan-Hindu constituency, and arrested the Opposition parties from claiming the support of the ‘Hindu’ base apart from rendering their support for Muslims suspect. They ended up being branded pseudo-secular from both ends. Aggressive and resurgent Hindu consciousness blamed them for Muslim appeasement while Muslims blamed them for ‘soft Hindutva’.

It is in this context that the AIMIM provided much needed relief for Muslims by coming forward to voice their grievances and expand their representation. After Owaisi’s bid in Maharashtra, his party won five seats in Bihar. The AIMIM is confident of doing well in Bengal. On social media, middle class Muslims are glad that Muslims are regaining the lost space. Poorer Muslims are left with little choice but to vote for the AIMIM to get an assurance of protection. However, wherever the AIMIM is performing well, it seems to be aiding the BJP by splitting the Muslim vote. The impact of this was most profound in Bihar where the elections were closely fought. The outcome became even murkier with Owaisi announcing that he would wait and decide which party to support in the eventuality of a hung assembly. His reasoning seems to be that as far as Muslims are concerned, it makes no difference whether it is the Congress led-secular formation or the BJP-led ‘communal’ formation as both have shortchanged the Muslims and robbed them of their rightful dues. This argument is similar to the Dalit-Bahujan view that the Congress and the Left parties are no different from the BJP when it comes to providing opportunities to the marginalized castes. The support of marginalized castes and now Muslim votes cannot be taken for granted by highlighting the impending threat of the BJP. Dalit-Bahujans and Muslims prefer to improve their own footprint. Significantly, Owaisi is pitching for an independent Muslim politics in alliance with Dalit parties like the Bahujan Samaj Party in Bihar and the Republican Party of India in Maharashtra.

The accusation made by the Dalit-Bahujans and, now, by Owaisi that the Congress, Left and regional parties did not do much to fulfil their aspirations cannot be denied. But it is also relevant to ask if representation alone would make a difference. Did Dalit representatives succeed in bringing about radical transformation to the community? What kind of a difference can Owaisi make with a few MLAs and perhaps a few MPs in the future? Would it be any different from what Congress and others achieved in the past, except that now Dalit-Bahujans-Muslims themselves will be able to make their own demands? The core problem is that the gap in social and economic power among castes, classes and religious groups is so humongous that representation has become the only possible mode of forging marginal but palpable change. It is, again, similar to the policy of reservations that benefited a small segment of Dalits but this does not justify critiquing reservations. Similarly, representation cannot bring about much change, but there cannot be a political or moral critique of it. On the scale of real-time economic opportunities and social mobility, the BJP does not seem to present a threat as things were no better before it rose to power; the BJP will only consolidate the power of Hindus over Muslims, upper-castes over Dalit-Bahujans and higher-end middle and corporate classes over the working classes. It will, in addition, provide an ideological justification for removing reservations, for disenfranchising Muslims and aggressively supporting the corporates, even as it offers more representation to smaller castes.

Majoritarianism is pushing marginalized social groups to a corner, forcing them to succumb and surrender. This is not being done through force alone, even though intimidation plays an important role. This end is also being achieved by producing a strategy where, in Owaisi’s case, legitimate aspirations of Muslims become a template for consolidating the grip of the BJP.

In a way, history is repeating itself. Syed Shahabuddin was encouraged into active politics by Atal Bihari Vajpayee, and his aggressive posturing on Babri Masjid and personal laws took the BJP from 2 seats to 182. What Shahabuddin was for the Atal-Advani duo, Owaisi is for the Modi-Shah pair. Owaisi’s consolidation of Muslim votes will result in a counter-consolidation of Hindu votes and the BJP will surge forward.