The agriculture bills and food security 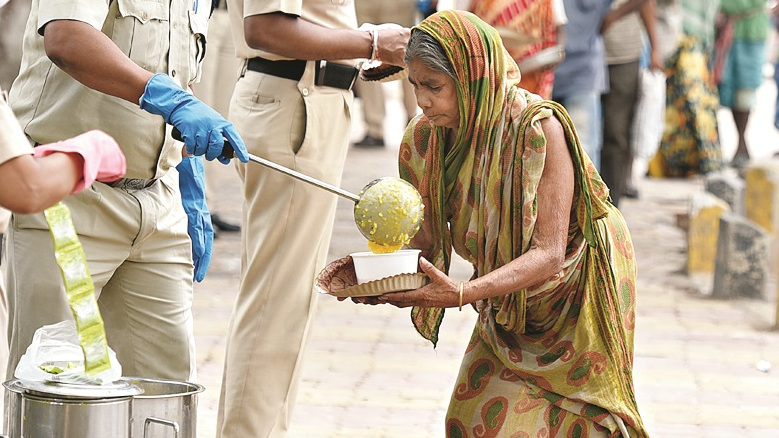 The three agriculture bills rushed through Parliament by the Narendra Modi government seek to bring peasant producers into direct contact with corporate buyers without any intervention by the State. The government suggests that intervention in the form of the minimum support price-regime will continue. But this is disingenuous: if the MSP-regime was to continue, why was it not incorporated into the legislation? Besides, the MSP-regime requires supervision by government agents like those installed in mandis; if the mandis lose primacy, as the legislation visualizes, then the MSP-regime becomes infructuous.

One consequence of this change has been much discussed, namely that it leaves the peasantry at the mercy of powerful private monopsonists, and that too in commodities subject to wild price fluctuations. In years of excess demand, the high prices will not be passed on to the producers; but in years of excess supply, the price falls will be passed on, driving peasants into debt and destitution. The protection against the latter provided by the MSP-regime is now being withdrawn.

There is, however, a second consequence that is less discussed, namely the loss of food security by the country. Since land is scarce, and ‘land-augmenting’ measures such as irrigation (that makes multiple cropping possible) and improvement in agricultural practices (that raise the yield per acre) are subject to limits within our existing agrarian arrangements, opening up the use of this scarce land to the pull of the purchasing power of Northern consumers will necessarily mean a diversion of acreage from foodgrains to crops not producible in the Global North.

To be sure, as long as the public distribution system continues, the government will have to procure an adequate amount of foodgrains; but unlike at present when it is obliged to procure whatever is offered, it will now be under no compulsion to procure anything in excess of what is needed for the PDS. This will only encourage the shift of acreage from foodgrains to other crops, especially with large firms catering to Northern markets encouraging such a shift.

In fact under the Doha round of WTO negotiations, great pressure was put on India to scale down its foodgrain procurement operations; but successive Indian governments, mindful of the immense social implications of doing so, both for peasant producers and for urban consumers, have resisted this pressure until now, which is why the Doha round remains deadlocked.

Advanced countries have for long been pressing India to import foodgrains, of which they have a surplus, and export other crops where they are deficient. India had been a foodgrain importer in the late 1950s and early 1960s, buying wheat from the United States of America under Public Law 480. In the mid-1960s, however, there were two successive harvest failures, which caused a famine in Bihar. The country’s import-dependence became so great that it was literally a case of ‘ships-to-mouth’; and arm-twisting by the US, a clear example of what some have come to call ‘food imperialism’, became so odious that Indira Gandhi asked Jagjivan Ram, the then food and agriculture minister, to expedite the ‘Green Revolution’.

The entire arrangement of MSP, procurement operations, PDS, and food subsidies to cover the gap between procurement prices and issue prices came into being from that time. Although under the neo-liberal regime, this arrangement has been getting whittled down, it still remains intact to a large extent because no government till now has been mindless enough to jettison it. And whatever one may think of the Green Revolution, whose ecological effects have often been criticized, it has allowed India to shake off the shadow of ‘food imperialism’ to become ‘self-sufficient’, even though at abysmal levels of income and food intake for the majority.

All that, some would say, belongs to the past; one should not keep harping on ‘food imperialism’. What is wrong with India importing food from the world market as it imports so many other commodities? There are several answers to this question. First, since the substitute crops, which would be grown in lieu of foodgrains and exported, have large price fluctuations, the foreign exchange earnings too would display similar fluctuations. It is perfectly possible, therefore, that in some years the country may not have enough foreign exchange to buy food in the world market.

Second, exactly the same would happen if there is a sudden outflow of finance. It is true that at the moment we have enough foreign exchange reserves; but that cannot be guaranteed to last forever. Making the continued availability of adequate foodgrains dependent on the absence of an outflow of finance is tantamount to making the lives of millions of people dependent on the caprices of a bunch of financial speculators.

Third, when a country of India’s size suddenly increases its purchase of foodgrains in the world market, the world foodgrain prices shoot up immediately. In years when the domestic foodgrain output drops, as would inevitably happen from time to time, India would have to pay an even higher price for importing what it requires.

Fourth, even if the country has enough foreign exchange to buy foodgrains in the world market in a year of collapse of the price of its export crop, the people producing that export crop would experience a decline in income and hence would lack the purchasing power to buy the foodgrains that have been imported. People would still starve despite the country having enough imported foodgrain stocks.

Fifth, leaving aside the question of foodgrain availability in contingencies, there is a further problem. Many of the export crops that would be grown in lieu of foodgrains involve lower employment per acre than foodgrains. Shifting acreage from food to non-food crops, therefore, would directly reduce employment. And the larger profits made from growing export crops with lower wage-bill per unit area would not create much employment elsewhere in the economy since these profits, which would be accruing to agri-business, would get spent abroad, creating employment elsewhere. The shift from growing food to growing export crops like fruits or flowers entails a net loss of employment, making people not only poorer but also — lacking purchasing power to buy food — hungrier.

The moral of the story is that for a country like India food security necessarily means growing one’s own food to the maximum possible extent. The market in this case cannot be the determinant of land-use. Since land is scarce, and domestic food production essential, land-use must be socially controlled.

Kerala is the only region in the entire third world that has a law, enacted in 2008, preventing diversion of paddy land to any other use. While Kerala is too land-scarce to become self-sufficient in foodgrains, this law has prevented paddy-land being diverted extensively for construction. Other regions in the country and other countries in the third world would do well to emulate Kerala’s example.

The damage that diversion of acreage from foodgrains to export crops does is best illustrated by the case of sub-Saharan Africa, which has been ravaged by a string of famines after it became import-dependent for food. In India, while there is no control over land-use, the old arrangement of MSP, procurement, and PDS implicitly ensured adequate domestic foodgrain production. The Modi government, alas, is dismantling that arrangement; it must be stopped.