The Qingdao agreement is no ordinary piece of parchment 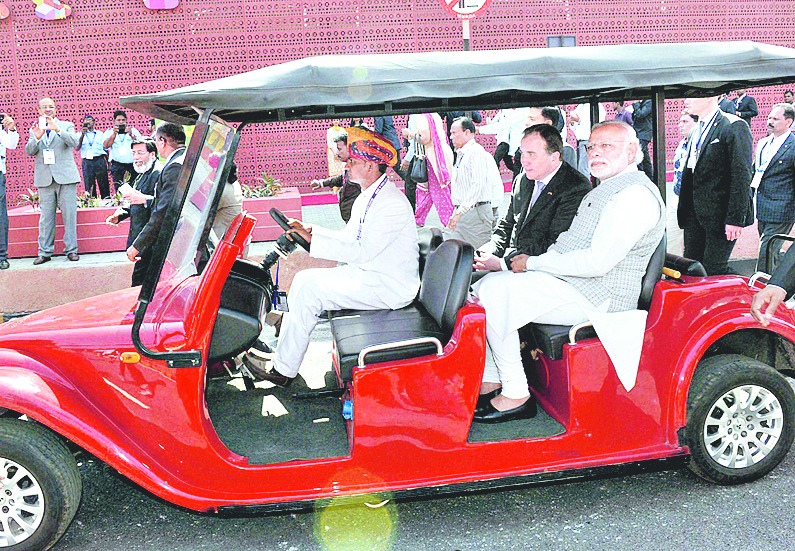 "The Yarlung-Tsangpo originates in the Jima Yangzong glacier near Mount Kailash in Tibet and flows 1,625 km before it enters into Arunachal Pradesh in India as Siang. The Siang is named the Brahmaputra (918 km) in Assam after the confluence of the Dibang and Luhit before it flows south through Bangladesh (337 km) as the Jamuna. There it merges with the Ganges and then splits into two, the Padma and the Meghna to form a vast delta." - Jesper Svensson, "Managing the rise of a hydro-hegemon in Asia", IDSA Occasional Paper 23, 2012

"When I went to China several years ago I felt a touch of that great stream of life that sprang from the heart of India and overflowed across mountain and desert into that distant land, fertilising the heart of its people." - Rabindranath Tagore in his inaugural address at the opening of Cheena Bhavana, Santiniketan, 1937

In the head-quotes above, the Swedish expert on trans-boundary rivers describes in accurate gravitas the southward trajectory of the fertilizing Yarlung which India embraces as the Brahmaputra. Tagore, on the other hand, describes in a burst of imaginative veritas the counter-gravity flow of a civilizing Indian stream, for China to take into its heart.

The India-China agreement, signed in Qingdao on June 9, 2018, on the sharing of hydrological data about the Yarlung-Tsangpo or Brahmaputra, as we in India call that oceanic river, is no ordinary piece of parchment. It needs to be seen against the backdrop of those two images.

Given our boundary dispute, given China's position on Aksai Chin and Arunachal Pradesh, given Doklam, given China's unceasing chase of techno-commercial opportunities in Asia and Africa to our detriment, and India's justified opposition to China's One Belt One Road initiative, any agreement between India and China today would be noteworthy.

But this one is more. Reached by the Indian prime minister, Narendra Modi, with the Chinese president, Xi Jinping, in Qingdao on June 9, 2018, it is historic. It is, in fact, civilizational.

One of the major characteristics of what history describes as a 'civilization' is river valley or deltaic habitation. Now, is that not an old factoid from any high school primer on history? Sure, it is. But it is instructive to remind ourselves of the hydro-graphic factoid described by Svensson and also its hydro-political co-relative. Svensson has used, in his valuable paper, the phrases 'hydro-hegemon' and 'source country'. He writes, somewhat dystopically, of the desiderata of upper-riparianism coupled with the dynamics of a super power. "Water security," he cautions, "has become one of the greatest challenges of Asia... Although India has entered into water sharing treaties with Pakistan, Nepal and Bangladesh with whom it shares important trans-boundary river systems, it doesn't have one with China which is the source country of the Yangtze, Mekong, Yarlung-Tsangpo, Indus, Irrawaddy, Sutlej and the Salween River, thereby exercising a degree of hydro-hegemony."

To be sure, in 2002, India and China had agreed on an arrangement about sharing flood season data on the Brahmaputra. But with China's position on Arunachal sharpening, data-sharing collapsed.

The Qingdao agreement revives it. 'Data-sharing' is a scientific term for inter-State communications on what, for millennia, transpires organically between deltaic communities, between upper and lower riparians. With new knowledge sources opening, including those augmented from outer space, data have deepened, as has its potential for deltaic well-being. Qingdao is therefore civilizational both in a traditional and a contemporary sense.

But it should also be so in another, vital, 'future' sense. In a Tagore sense.

What may that be ?

To the extent that, in the Qingdao agreement, India has succeeded in persuading the upper-riparian 'parent' to see the river downstream non-hegemonically, we must hail its gravitational intelligence. But, to the extent that India too is an 'upper riparian' vis-à-vis Bangladesh, we must not fail its cross-gravitational and civilizational potential. And in Tagore's spirit.

S.K. Mahapatra and K.C. Ratha say pertinently in "Brahmaputra River: A bone of contention between India and China", Water Utility Journal, 2016: "The requirement of... population rise has forced China to have the Tsangpo-Brahmaputra River project. India is also racing to construct hydropower dams on the Brahmaputra River... The nub of the resource competition thus connects with mass dam building... The Brahmaputra is now the target of project planning by both China and India." The two scholars warn of the "disastrous ecological consequences due to race for dams building".

Qingdao should not mean a new 'project planning' unconcern, whether in Beijing or in New Delhi, about the risks, seismic and ecological, that dams create. The agreement on data-sharing should not strengthen the cement-guzzling 'dams' lobby', the bilaterally competitive 'dams approach'.

'Should-nots' apart, there is a positive or constructive 'should' that Qingdao must lead to. Revived data-sharing on the great river should lead to another India and China data-sharing. And this is, in a physical co-relative of Tagore's 'stream of life', the experience of Indian and Chinese farmers of climate change on farms, on their ground water resources. Our Niti Aayog's forecasts, released on June 14, on the water crisis that looms over us are alarming. So are the views expressed by Chinese experts on the same crisis in China.

Ma Jun is the director of the Institute of Public and Environmental Affairs in Beijing. In an interview in October, 2017, he spoke of "the harsh reality that in the densely populated coastal regions and the central-western part of China it is not easy to find clean rivers and lakes anymore". He added, "The other problem is the quality of groundwater aquifers is still deteriorating."

China's paddy cultivation, facing an increasing water scarcity relatable to climate change and a soil crisis, has to hold important lessons for India and vice versa. The need for India-China interaction in this matter is manifest. India should ask China for a team of farmers to visit us and offer experiences of the agrarian crisis that we are both facing. Nehru sent, in 1938, a medical mission with the legendary doctor, Dwarkanath Kotnis, to assist China in its war travails. President Xi can surely reciprocate now.

Exactly 20 years ago, in June 1998, our then president, K.R. Narayanan, received the new Chinese ambassador to New Delhi with these words: "As a sister civilisation in the East, India has had extensive contacts and exchanges with China which have been not only mutually rewarding but enriching for the Asian and world civilisation." And in a way that was typical of that philosopher-president, he added: "We must promote exchanges at the level of the peoples of India and China." Two years later, as he was leaving on a State visit to China, the then prime minister, Atal Bihari Vajpayee, told him he hoped the visit "will open a new chapter in our relations". I cannot say if it quite did that, but the visit, in which he was accompanied by a political rainbow comprising the members of parliament, Sushma Swaraj, Somnath Chatterjee, Sushil Shinde, S. Ramachandran Pillai and a non-MP, Mohammed Afzal 'Meem', certainly touched minds there. "You were born in 1920," the then Chinese president, Jiang Zemin, told Narayanan, "I was born in 1926. We belong to the same generation... We must make efforts that would be beneficial to both our peoples." When Narayanan called on the premier, Zhu Rongji, he pointed to the wide spectrum of Indian politics represented in the Indian delegation and said all parties in India were united in wanting improved relations with China. And Zhu, thoughtfully, said something I (being present as the president's secretary) can never forget. "There is a touch," Zhu said, "of Indian civilisation in Chinese culture."

The Chinese establishment is not known to be prodigal in praise, or lavish in appreciation. Zhu's comment was not, either. But it was a sharing, a ready sharing, of what Tagore meant by 'the stream of life'.