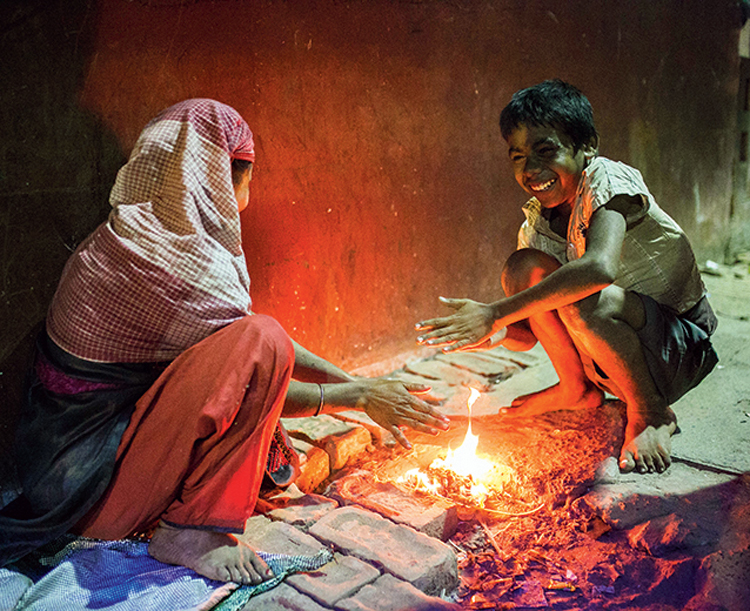 Sir — Now that the mercury has dropped significantly in the city, the burning of egg racks, dry leaves and cardboard to light fires for warmth has once again become common on the streets. Such materials produce acrid smoke when burnt, and contribute to air pollution. However, it is difficult to condemn this practice from a humane point of view, as burning refuse is the only way for a vast section of the Indian population to stay warm during the bitter winter. Such instances demonstrate that environmental and political issues cannot be separated from each other, and only economic betterment can solve the problem.

Sir — The results of the recently-concluded Jharkhand assembly elections — the Bharatiya Janata Party lost to the Jharkhand Mukti Morcha-led alliance — are a setback to the BJP and its ambition to rule the entire country. Following the recent electoral defeats in several states, losing Jharkhand has now reduced the BJP’s domain considerably. But one must not underestimate the party — it still holds power at the Centre and plays a significant role in policymaking.

The elections have made it clear that the saffron party — its Hindutva nationalist agenda, its claimed emotional connect with the masses and its money power notwithstanding — can be given a good run for its money if the electorate decides to vote against it. Further, a ‘united Opposition’ can still be a winning formula. Although it would be far-fetched to surmise from this result that the BJP’s politics of polarization would hitherto cease to yield results, the rise of the Opposition could at least make it difficult for the BJP to pass contentious bills in Parliament in future.

The revoking of Article 370, the promise of a grand Ram temple in Ayodhya within four months, the passage of the Citizenship (Amendment) Act and the dubbing of dissenters as ‘urban Naxals’ have clearly not helped the BJP in Jharkhand. Economic distress, unemployment and commercial exploitation of natural resources in the state seem to have weighed heavily on the voters, especially the adivasi people who form a sizeable section of the state’s population. They appear to be unhappy — and justifiably so — about the BJP jeopardizing their right to land and making Raghubar Das, a non-tribal person, the chief minister. The hunger index in Jharkhand’s tribal belts is among the worst in the world. All these issues need the attention of political parties. Merely projecting an inflated image of the prime minister, Narendra Modi, cannot help the BJP win elections every time.

Sir — The humiliating defeat of the Bharatiya Janata Party in Jharkhand is not surprising. The prime minister held around 10 election campaigns in the state, and the Union home minister and BJP president, Amit Shah, addressed the people in at least seven. All the rhetoric concerning the abrogation of the special status of Jammu and Kashmir, the construction of the Ram temple, the criminalization of instant triple talaq and the implementation of the Citizenship (Amendment) Act was rejected by the people of the state. It is clear that these issues cannot overrule the local ones when it comes to the state polls. The results show yet again that the image of Narendra Modi as a BJP mascot has its limitations in spite of his popularity.

The main reason for the BJP’s recent defeats in several states seems to be the party’s growing arrogance following its massive victory in the general elections. With the loss of Jharkhand, the BJP now governs only 35 per cent of India’s landmass, whereas in 2017, its dominion extended to 71 per cent. It is time for the party to introspect. Instead of trying to belittle the Congress and Jawaharlal Nehru or Pakistan all the time, the BJP should focus on delivering on its promises such as the creation of jobs and detecting black money. It is ironic that it was the BJP who introduced the dubious system of electoral bonds instead of wiping out corruption. It has failed at stopping poverty-stricken farmers from committing suicide. Moreover, the state of the economy is growing worse. The fact that the tribal voters have turned against the BJP in significant numbers is also telling. It is the opportune moment for the Opposition to unite against the Modi-Shah regime and form a people-friendly, corruption-free government.

Sir — The results of the Jharkhand elections could be a turning point for both the Congress and the BJP. The latter must understand that, in state after state, people are prioritizing the failing economy over its faith in Narendra Modi. This is working in favour of the Congress, which is giving the regional parties more visibility in alliance formation and opting for the back seat. The Congress would do well to continue with this strategy, thereby improving its national presence. Its immediate challenge in this new role will be in Delhi, where Arvind Kejriwal has been making progress with regard to important issues faced by the people.

The Congress should follow its approach of forming a strong coalition in Delhi as well. This strategy proved to be fruitful for the BJP in 1989 when it joined hands with the Shiv Sena, and was used in other states. The BJP owes its present pan-India dominance to this foresight. It must understand that humility has its rewards.