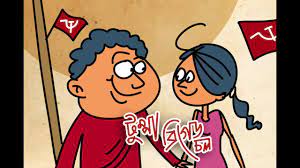 The Communist Party of India (Marxist) released a parody of a popular song, “Tumpa sona”, which has gone viral.
YouTube screengrab
The Editorial Board   |   Published 20.03.21, 04:11 AM

Elections are a strenuous affair, especially for the voters’ ears. The loud exhortations of canvassing politicians and the even louder trading of barbs among contestants can jangle the nerves. As such, a touch of melody can act as a soothing balm for the senses in such shrill times. This musical reprieve has been provided, yet again, by the jingles and catchy tunes composed by political parties as Bengal hurtles towards its assembly elections. Even the usually dour comrades are not out of tune: the Communist Party of India (Marxist) released a parody of a popular song, “Tumpa sona”, which has gone viral. The ironies are palpable. The Left leadership, once the bastion of the upper class, Hindu bhadralok, has been forced to rely on a rather subaltern rhythm in order to reclaim lost turf; the Bharatiya Janata Party — the high priest of authoritarianism — now has a ear out for foot-tapping, soul-stirring stuff. It released its own version of “Bella ciao”, a 19th-century Italian protest song against fascist forces, morphing it, with a touch of uncharacteristic humour and imagination, into “Pishi jao”, in a bid to pinch the Bengal chief minister where it hurts. But it is the Trinamul Congress that seems to be the principal contender for the Political Grammys: its signature rap song, “Khela hobe”, has stormed YouTube.

Music and message go hand in hand in these political melodies. Through these curated tunes, the CPI(M) has focused on joblessness and the frustration of the youth; the BJP has pledged to root out corruption; the TMC, meanwhile, has invoked the spectre of the ‘bargi’ to project itself as the protector of Bengal’s culture and ethos against a marauding outsider. The differences in these claims notwithstanding, what is refreshing is that in a country known for the sterility of its political discourse manifest in tired rhetoric, empty promises, grandiose claims and unimaginative policy, political contests — an election, one of the markers of a vibrant democracy — retain their ability to serve as a fount of creative energy. This creativity also injects the critical elements of banter and playfulness that are essential to sustain dialogue and democracy in the long run. A fecund political landscape can also do a lot to undo the propensity among politicians to make intemperate remarks against their opponents. A clever turn of phrase or a sardonic song, arguably, delivers a far more potent punch than some of the offensive comments that have come to substitute civilized political dialogue.

The sound of political music is also a heartening reminder that the kernel of democracy can come to fruition even amidst the lengthening shadow of regimentalism. This is because soulless, totalitarian tyrannical regimes are synonymous with silence and the absence of melody. China had, until recently, outlawed such Western composers as Beethoven; the Soviet Union had forbidden works by ‘bourgeois formalists’; while Nazi Germany had condemned ‘Jewish music’. Election beats could well be construed as the beating heart of democracy. Hopefully, India’s ruling party would not find the notes too jarring.