The security situation in Rakhine is worsening 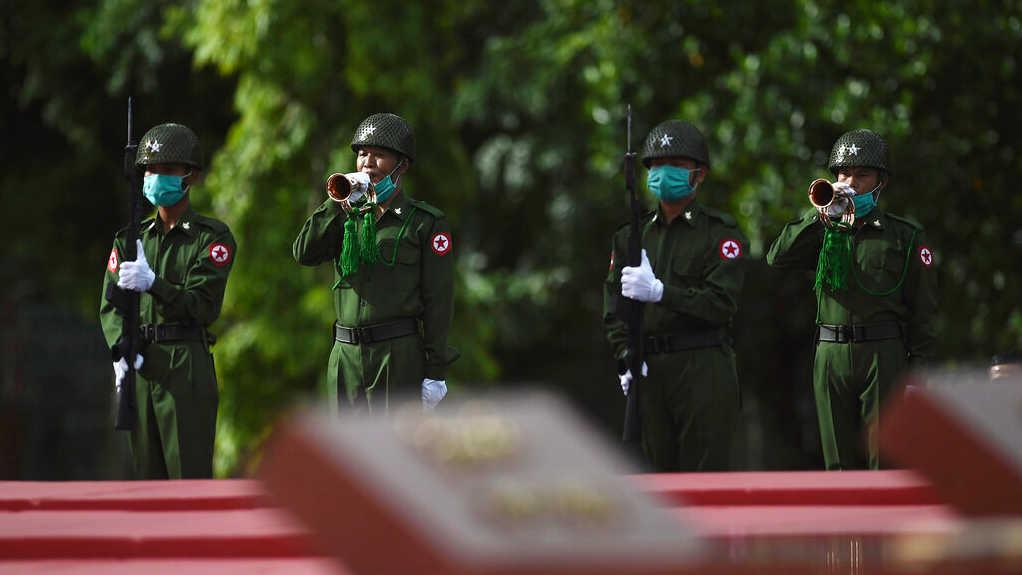 Myanmar’s Senior General, Min Aung Hlaing, has triggered a controversy by saying in an interview that the terrorist organizations active in his country are backed by “strong forces”. The remark comes in the backdrop of mass displacement in Rakhine, Myanmar’s southwestern province, where the Asian giants, China and India, are building infrastructural projects. The Myanmar military spokesperson, Brigadier General Zaw Min Tun, reportedly elaborated on the comment made by the commander-in-chief of Myanmar’s armed forces that by ‘terrorist organizations, the military chief was referring to the Arakan Army (AA) and the Arakan Rohingya Salvation Army (ARSA)’.

Rakhine has emerged as a place of geostrategic significance for India and China. A China-Myanmar oil and natural gas pipeline was put in place in 2013 and the 1,420 kilometre-long crude oil pipeline became operational in 2017. The project, which starts from Rakhine’s seashore facing Bay of Bengal, has strategic significance as the pipeline would enable China’s oil and gas imports to reduce their burden on the Malacca Straits, a narrow channel that connects the Indian Ocean and the South China Sea. In January this year, the Chinese president, Xi Jinping, visited Myanmar and a number of bilateral agreements were announced, including one for the development of a special economic zone and a deep-water port at Kyaukphyu in Rakhine state. India, too, is heavily invested in Rakhine as it is building the Kaladan project. The multi-modal transit transport project will lessen the distance between Calcutta and Sitwe, the capital of Rakhine, and provide another link to India’s Northeast in addition to the Siliguri corridor.

In the interview, Min Aung Hlaing didn’t name any country although some reports suggest that he is insinuating China for arming the AA. The statement is cleverly worded even though Myanmar has raised the issue bilaterally with China, saying that Chinese weaponry is circulating among various insurgent ethnic armed groups in Myanmar. Some reports indicate that Chinese weaponry reached Myanmar through neighbouring countries like Laos. China is also the only qualitative arms-supply lifeline for the Myanmar military — the Tatmadaw. Even though the military has tried to expand its options for purchase of arms, China remains the clear leader. During the Rohingya crisis in 2017, China had blocked attempts at the United Nations security council to move a resolution against Myanmar. For the last few years, the international perception is that China has been Myanmar’s most reliable partner. Sino-Myanmar relations have often defied unidimensional interpretations in the context of postcolonial Asian studies. The recent developments in Rakhine are proving that, yet again.

As per the Rakhine Ethnic Congress, a local non-profit outfit, more than 200,000 Rakhine Buddhists have been displaced in the province since fighting resumed in the last quarter of 2018 between the Tatmadaw, whose personnel mostly come from the Burman Buddhist majority, and the AA. The AA cadre are Buddhist, but are ethnically distinct from Burman Buddhists.

Interestingly, the two insurgent groups claiming to represent the cause of the two main ethnic communities of Rakhine have now been declared as terrorist groups. ARSA’s birth is believed to be grounded in the decades-long discriminatory citizenship laws against Rohingyas that deprive the community of citizenship. AA’s goals can be seen in the context of an ethnic group nurturing political and economic grievances of neglect at the hands of the Burman Buddhist elite. Communal riots took place between Rohingyas and Rakhine Buddhists in 2012 but the two communities have a common grievance against the national elite comprising Burman Buddhists.

The AA has had close relations with the Kachin Independence Army, an ethnic group with a presence in the Kachin state bordering China. It is a known fact that AA fighters have, for years, been trained by KIA commanders. Apart from several attacks on the Tatmadaw, particularly mine explosions to blow up military convoys, the AA has also selectively targeted infrastructural projects. In November 2019, it abducted five Indian workers working on the Kaladan project. Four were released after a day; one of them died in the abduction.

Sino-Myanmar relations have directly impacted events in Rakhine. With the rest of its Asian allies, including North Korea, China has tried to wield its influence indirectly. But in Myanmar’s case, there is direct and indirect influence. China is sensitive to any other country playing any kind of facilitatory role, particularly in the ongoing peace process in the north, a territory that adjoins China. Even on Rakhine, it has objected to the internationalization of the crisis. Immediately after the Rohingya crisis in 2017 that had drawn the attention of the international community, it had attempted to mediate between Bangladesh and Myanmar on the repatriation of Rohingyas. In order to fully comprehend China’s multidimensional, granular strategy in Myanmar, one has to be cognizant of the sophistication of its forays, including the creative use of cooperative federalism. China’s Yunnan province officials are empowered to directly engage with Myanmar and its constituent states on a variety of issues. The economic trade with Myanmar is reportedly around a quarter of Yunnan’s trade. Yunnan University has had an active research centre for Burmese language and culture since 2012. Various Chinese companies active in Myanmar, including State ventures, regularly facilitate outreach programmes, such as inviting civil society members from the neighbouring states of Myanmar to Yunnan.

Myanmar’s elite has historically set its own red lines on Chinese influence. The army chief’s invocation of “strong forces” backing “terrorist organizations” seems to be part of a subtle signalling. Myanmar’s civilian government, too, has stressed the need for a more careful evaluation of the ongoing projects being pursued under the Belt and Road Initiative. On several projects being negotiated with China, the Myanmar government has sought the help of foreign firms to ensure that they don’t burden the country with unsustainable debts.

Aung San Suu Kyi’s National League for Democracy is expected to return to power in the elections scheduled in November. A semi-democracy kind of polity is expected to continue as the military is reluctant to endorse a fully civilian government. As the economic stakes become higher in Rakhine, Myanmar’s weak State capacity, disgruntled ethnic minorities and the ongoing mega infrastructural projects with huge geostrategic implications will make the security situation even murkier. This will have consequences for Myanmar as well as for neighbouring countries and relationships among them.