Richard Nixon on the ugliness of Indian women 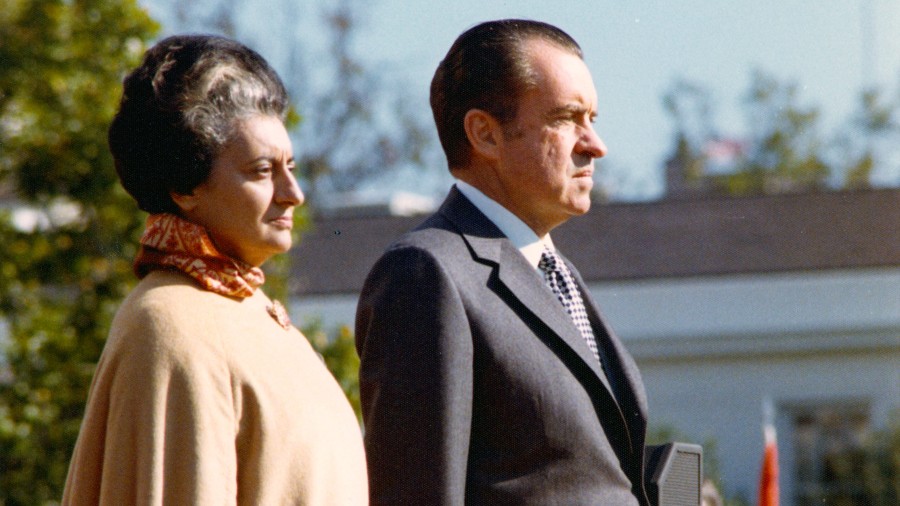 Nixon disliked Indira Gandhi for getting above herself, for not being ‘womanly’ enough
Wikimedia Commons
Mukul Kesavan   |   Published 06.09.20, 12:55 AM

On September 3, The New York Times published an extraordinary article that detailed Richard Nixon’s loathing of Indians, especially Indian women. Its author, Gary Bass, who had earlier written The Blood Telegram, a book-length critique of US diplomacy during the 1971 war, based his piece on tapes recently declassified by Nixon’s presidential archive. In them, Nixon is heard saying at various times that Indian women are the most unattractive women in the world, that they are sexless, that they turn him off and there’s a particularly entertaining bit where he wonders how Indians reproduce at all, given how repulsive their women are.

What are we to make of these revelations? The first thing to be said is that they shouldn’t be a great surprise. Tapes released more than 20 years ago established that Nixon was an equal-opportunity bigot. He was energetically anti-Semitic, for example. He used to complain that Washington “is full of Jews”, that “[m]ost Jews are disloyal” and that “...generally speaking, you can’t trust the b*****ds.” He was also racist and the tapes brim over with casual prejudice about minorities.

Perhaps the more interesting revelation is Henry Kissinger’s complicity in Nixon’s bigotry, given the fact that Kissinger is Jewish and had been at the receiving end of Nazi racism himself. Annoyed by the assistance offered by Indira Gandhi to Bengali nationalists in East Pakistan in June 1971, Kissinger described Indians variously as “a scavenging people”, as “masters of subtle flattery”, as a people whose “...great skill is to suck up...” It’s fascinating how fluently Kissinger uses the stock phrases WASPs once used to disparage Jews (subtle, flatterers) to denigrate Indians. This great practitioner of realpolitik was happy to use second-hand colonial clichés about sub-continental types to characterize desis. So if Indians were clever suck-ups, Pakistanis were a “fine people but... primitive in their mental structure”.

To students of diplomacy, the lesson of Nixon and Kissinger’s loathing of India and Indians might be that personal chemistry (or the lack of it) can seriously shape policy. Nixon’s generalizations about Indians and Indian women in particular, were based on a sample of one. He hated Indians because he loathed Indira Gandhi; she wound him up to a point where he became incoherent with rage. This was only partly because India’s tilt towards the Soviet Union and hostility towards Pakistan got in the way of Nixon’s strategic objectives. He also just hated her. Which might explain why someone as peculiar-looking as Nixon would even venture a view on the ugliness of other people. Say what you like about Indira Gandhi’s politics, in the looks department she was Rita Hayworth to his W.C. Fields.

Bass has a marvellous story about the origin of this detestation. After losing to Kennedy in 1960, Nixon was in the political wilderness for the best part of a decade. He ran for governor in California and lost. In 1967, when he was plotting a comeback, he called on the Indian prime minister in Delhi. Twenty minutes into their meeting, a visibly bored Indira Gandhi asked an aide in Hindi when her ordeal was going to end. According to Bass, “Nixon had not gotten the precise meaning, but he sure caught the tone”.

To be fair to Nixon, he wasn’t alone in his dislike of her. Ten years earlier, when Indira Gandhi had accompanied her father to Kennedy’s White House, Jacqueline Kennedy hosted a ladies lunch for her. It didn’t go well. Indira wanted to be by her father’s side listening in on affairs of State and the First Lady resented that. In an interview recorded in 1964 but published much later, she didn’t hold back: “She liked to be in with the men. And she is a real prune — bitter, kind of pushy, horrible woman. You know, I just don’t like her a bit. It always looks like she’s been sucking a lemon”.

Both Jacqueline Kennedy and Nixon disliked Indira Gandhi for getting above herself, for not being ‘womanly’ enough. By the time Indira attended that unsuccessful ladies luncheon, she had already served as the President of the Indian National Congress. Given that Jacqueline was happy to admit that “I get all my opinions from my husband” and that her avowed purpose in life was to “...become the kind of wife that you can see that your husband wants,” it isn’t hard to see why she disliked the ambitious dynast she was hosting. It is to Indira Gandhi’s credit that she was detested for being herself by two people as different as Richard Nixon and Jacqueline Kennedy. She was also in good company. In the same set of interviews, the former First Lady called Martin Luther King a “phony”.

Outrage apart, the sobering lesson of Bass’s revelations is how peripheral India was to American calculations in 1971 and how peripheral it remains today. Nixon might have loathed India and Indira but he loathed them in passing. India wasn’t important enough to be detested for its own sake. Nixon’s attitude towards the Bangladesh war was shaped by his strategic focus on China. Since Yahya Khan was helping him with the Chinese, he tilted towards Pakistan. China had to be reckoned with; India wasn’t important enough economically, politically or militarily to matter in itself. It was a sideshow in a great game being played out elsewhere.

This is India’s geopolitical tragedy. It is consistently cast by the great powers as an attendant lord, who, in Eliot’s words, will do to “swell a progress, start a scene or two”. In its own mind, though, India is, if not Hamlet, at least a considerable player. There is no way of reconciling the roles India reads for and the roles it is cast in. India was a passing annoyance in 1971 because Nixon was trying to make up to China. Half a century later, India is of passing interest to Donald Trump because he’s reversing the United States of America out of the relationship with China that Nixon pioneered.

The growing belief that this phase in the US-China relationship has given India a ticket to the top table in the shape of the Quad is a happy delusion generated by comfortable think tanks. The US, Japan and Australia are amongst the three most affluent nations on earth. There is a solidarity and camaraderie about being rich together that draws wealthy countries into club-like alliances. In the looser frame of the Quad, India’s designated role is that of the poor relation who might do the heavy lifting that the others can’t or won’t do. The truth is that as far as our borders with China are concerned, our circumstances haven’t changed since Nehru: we’re still on our own.

More generally, it’s harder than ever to see Nixon’s prejudices and profanities as relics of some bygone era. Nearly 50 years after electing one bigoted, profane and misogynistic president, Americans elected another one. If Trump’s private conversations were taped and transcribed, they’d be unprintable. America might have changed but given Trump, it’s hard to believe, with Martin Luther King, that the arc of America’s history bends towards justice. It seems, instead, to zigzag between high piety and rank prejudice. If Trump takes the next election, it’s going to be a very long zag.