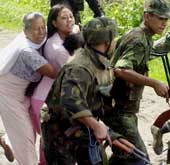 Mani Shankar Aiyar found a poem of Savarkar on the walls of the cellular jail in Port Blair. He had it removed. When he learnt of it, Bal Thackeray got a plaster image made of Aiyar, and beat its face with sandals. Both were theatrical gestures ? the kind of thing politicians do, and others find ridiculous or nauseating. But what was the historical context? Vinayak Savarkar?s father, Damodarpant, was a Chitpavan Brahmin. Democracy has transformed the society of Maharashtra. But right till 1947, Brahmins were the elite; Marathas were illiterate manual workers. And Chitpavans were the cr?me de la cr?me. Even today, you will find many in Poona with eyes like Aishwarya Rai?s; they are likely to be Chitpavans. Damodar was a small jagirdar in Rahuri; he presumably received rents from Maratha sharecroppers. He had three sons ? Ganesh, nicknamed Baba, Vinayak, alias Tatya, and Narayan. He also had a daughter called Mainabai. The boys went to school in Nasik. Tatya was born in 1883. When he was nine, his mother Radhabai died of cholera. When he was fifteen, he survived smallpox. His father married off Baba. Next year, Damodar died of plague.

On his father?s death, Tatya took the Public Service examination and passed; he could then have become a clerk. But Babarao, now head of household, married off Tatya to Yashodabai, the daughter of Bhaurao Chiplunkar, a family friend. With Bhaurao?s financial help, Tatya moved to Poona in 1901 and took admission to Fergusson College, which Babarao had joined already. At that time, Bal Gangadhar Tilak was making waves. He edited a newspaper, Kesri, in Poona. In the Congress, he opposed liberals like Dadabhoy Naoroji and Gopal Krishna Gokhale. They wanted measured constitutional progress towards autonomy to be progressively granted by the British government; their means were petitions and resolutions. Tilak wanted to adopt more ?extreme? means. Specifically, he proposed boycott, or non-cooperation as Gandhi called it later.

In 1905, Lord Curzon divided Bengal ostensibly for administrative convenience; but the division had a Hindu-Muslim dimension. An agitation spread all over Bengal, and thence over India. On October 10, 1905, people in Poona organized a bonfire of clothes made of British cloth. Savarkar spoke in the meeting. The principal of Fergusson College fined him Rs 10 and threw him out of the hostel. But he was allowed to take the BA examination, which he passed.

After finishing his BA he started doing Ll B, the refuge then of aimless Indians. Then he heard that Shyamji Krishna Verma, an Indian settled in London, was offering financial assistance to students. He gave an undertaking that he would not join government service on return, got a testimonial from Tilak, and went off to London in 1906.

There he fell in with a group of young Indians who wanted to make the British leave India by force of arms. He translated a Russian manual on bomb making and sent it to his friends; he sent guns to India through collaborators. The government unearthed bomb factories in Maharashtra; on the evidence of his connection with them, it sentenced Babarao to transportation for life on 8 June 1909. On 30 June 1909, Tatyarao gave a revolver to Madanlal Dhingra who shot Sir William Curzon Willie the next day; Dhingra was hanged for it.

In December, his younger brother, Narayanrao, was arrested on suspicion of being associated with an attempt on the life of Lord Minto, the Viceroy (he was cleared later). On 21 December, A.M.T. Jackson, collector of Nasik, was murdered in a theatre. Savarkar was found to have sent the pistols used by his assassins. A special magistrate in Nasik issued a warrant for his arrest on 17 January 1910. Savarkar ran away to Paris, but then unaccountably, returned to London on 13 March. There is a story that he was missing Margaret Lawrence, his girl friend, but his supporters consider it slander. He was taken to India, tried, and sentenced to two life terms ? 50 years ? and sent off to the Andamans, where he joined Babarao. He was not even called to the bar before being whisked away from London.

In the cellular jail he had to do hard labour ? being yoked to an oil mill, shelling coconuts and making ropes, etc. He also suffered from chronic dysentery. He made petitions for mercy in 1911 and 1913; in the 1913 petition he wrote: ?Therefore if the government in their manifold beneficence and mercy release me, I for one cannot but be the staunchest advocate of constitutional progress and loyalty to the English Government, which is the foremost condition of that progress.? Finally, in May 1921, he was transferred to Ratnagiri jail; in 1924 he was released provided he did not leave Ratnagiri district without permission and did not engage in political activities.

The problem before him was to do something that engaged his passions but did not attract the wrath of the government. So he started propaganda asking Hindus to defeat Muslims? efforts to get more than their proportion of the population (22 per cent) justified. In the next 15 years, the British tried to divide Indians through communal electorates; Jinnah tried to get Muslims the right to secession for Muslim-majority provinces. Savarkar wrote passionately against ?concessions? to Muslims.

But it was not Jinnah who drew Savarkar?s ire; it was Gandhi. If Gandhi had one aim, it was to make the British leave India and to prevent the division of India by peaceful means. To this end, he at various times offered Jinnah the Prime Ministership and asked him to choose his own cabinet; and he agreed to equal seats for Muslims and non-Muslims in a proposed constituent assembly. This, for Savarkar, was treason. Muslims should get nothing more than their numbers justified; if they asked for more, or tried to secede, they must be put down by force. Savarkar was everything that Muslims needed to justify their fear of Hindus and need for partition.

What irked Savarkar was that the Hindus overwhelmingly followed Gandhi. The Hindu Mahasabha sometimes won seats in local elections; but in provincial elections it was invariably trounced by the Congress. It could not even win the seat from Bombay, where Savarkar had made his home. The almost-barrister ex-terrorist who in his youth outshone the gentle Gandhi was ignored by everyone, even the British government to which he had become loyal. All the glory went to a barrister who had made a name in South Africa, came to India and usurped the leadership of the Congress on Tilak?s death, who had appropriated Tilak?s boycott techniques, who had hypnotized industrialists into supporting and funding him, who had seduced the masses with his non-violent non-cooperation, and had led them into the vivisection of the motherland. The reality was bitter; it poisoned Savarkar?s writings. Anyone who read Savarkar and believed him in the 1930s and 1940s would have wanted to kill Gandhi.

No one contests that Nathuram Godse, Gandhi?s murderer, was a member of Hindu Mahasabha, and that he went to meet Savarkar days before he killed Gandhi. Digambar Badve, the approver, said that he heard Savarkar tell Godse, ?Gandhichi shambhar varsha puri zhali? (Gandhi?s century is over) and ?Yashasvi howun yaa? (?Come back with success?). No other witness corroborated this, and Savarkar was acquitted. Maybe Badve misheard; maybe Savarkar was innocent. He cannot have been happy with Gandhi?s death; it came too late for him.