When the entire country is under lockdown as roaming the streets is not safe, Omar Abdullah’s so-called ‘freedom’ will mean little 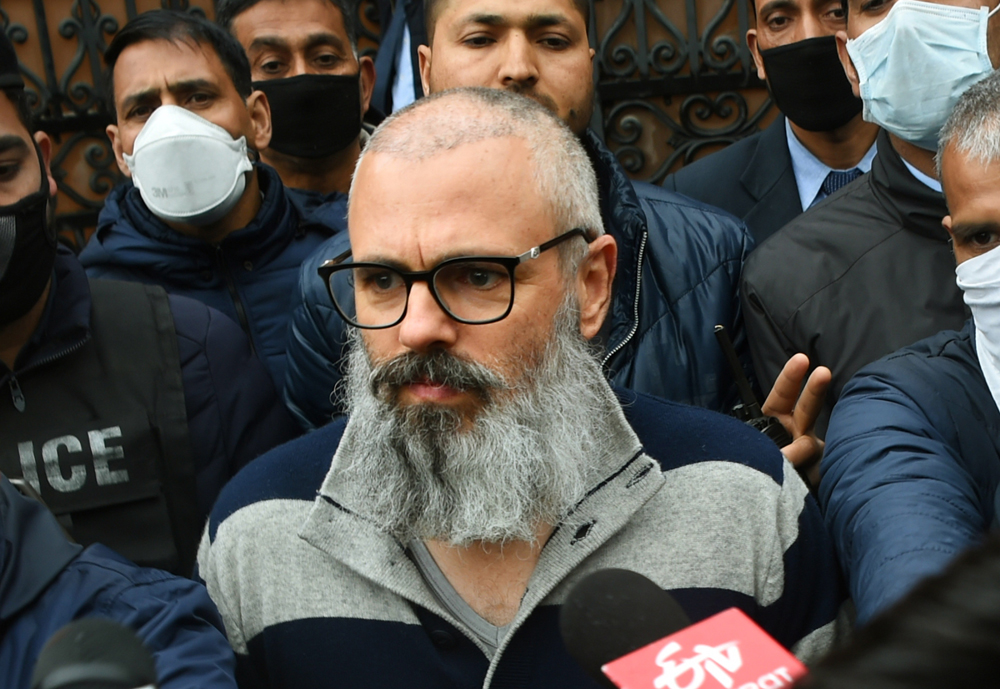 The former chief minister of Jammu and Kashmir, Omar Abdullah, speaks to the media after he was freed from detention on March 24
(PTI photo)
The Telegraph   |   Published 26.03.20, 06:48 PM

Sir — Many states in India are planning to let convicts — and political prisoners — out on special parole to decongest the prisons at the time of the pandemic. In Bangladesh, too, the hitherto imprisoned Opposition leader, Khaleda Zia, has been released for six months so that she can quarantine herself at home. But one wonders about the timing of the Indian government’s order to release the former chief minister of Jammu and Kashmir, Omar Abdullah, from ‘house arrest’. When the entire country is under lockdown as roaming the streets are not safe, Abdullah’s so called ‘freedom’ will mean little given the nationwide restrictions.

Sir — Ruchir Joshi was at his sarcastic best in his article, “A touch of oil” (March 24), where he wrote about the prime minister’s call for the janata curfew on March 22. Was not the Sunday episode yet another instance of Narendra Modi exercising his powers to watch the people of India act as an obedient population? After all, in his 30-minute speech to the nation, Modi did not announce what his government would do for the economy. There were no concrete plans to tackle the massive crisis that the daily wage earners and the poor would have to suffer — an appeal to not cut wages is not enough.

Modi did not even address problems like the shortfall in masks or testing equipment for Covid-19, at a time when questions are being raised about whether the available kits are up to the required standards, or why a Gujarat-based firm, partnered with a manufacturer with no prior track record of producing diagnostic kits, was given the first chance to manufacture test kits.

Having had his narcissism validated once again, the leader has now announced a countrywide lockdown and left it to the states to handle the messy details of healthcare and other facilities.

Sir — Ruchir Joshi deserves a salute for his straight talk. It was disturbing to see so-called educated people blindly engaging in the activity of “taali bajao, thaali bajao”, as advised by the prime minister.

Surely there were better means of expressing solidarity and appreciation for the work done by healthcare personnel than making a show of our herd mentality in front of the entire world? But it is likely that Joshi’s views would not be appreciated by all.

Narendra Modi must be pleased that he has successfully guided a large number of people, especially the privileged, to follow his instructions. Have we, as a society, lost our sense of responsibility so much that we need to be prodded by the prime minister to appreciate the services rendered by fellow citizens on cue? As Joshi puts it, it was indeed a “test run” by Modi.

Sir — At a time when India, along with other countries, is battling the deadly coronavirus on a war footing, some writers are busy pouring out vitriol against the prime minister. In his article, Ruchir Joshi discovers merit in leaders of other countries — he applauds the speech of the German chancellor, Angela Merkel, to the skies. However, it beats one to think that Joshi did not find anything noble or worthy in Narendra Modi’s speech. In his address to the nation, Modi exhorted his countrymen to stay healthy and avoid going out of their houses. He also spoke about the need for them to come together to fight this scourge.

In the entire article, Joshi never mentioned the irresponsible role of China in keeping the world in the dark for close to a month. The writer could also have taken more potshots at those who continue to defy government orders by taking things lightly. The thaali-beating exercise was a collective gesture to appreciate doctors and other service providers who are tirelessly working for Covid-19 patients by putting their own lives at risk. Criticizing such gestures can have a demoralizing effect.

Sir — The article, “A touch of oil”, rightly notes that we have been turned into a “nation of idiots”. Instead of making arrangements for the rehabilitation of the homeless, ensuring sustenance for wage-earners or bringing international standard testing kits and medical infrastructure to hospitals, the prime minister urged Indians to beat plates and ring bells in ‘honour’ of the doctors who are rendering yeoman service in a crisis. Far from questioning what concrete action was being taken to stop the contagion, why our health infrastructure is in a mess with an allocation of less than 2 per cent of the GDP, why adequate preventive measures were not taken earlier in spite of the outbreak of the disease in many other countries, groups of gullible Indians marched out to their balconies and the streets with plates, pots, pans, bells and what not, making a mockery of the idea of social distancing.

Even now, authorities have not managed to ensure supplies of basic necessities to every door. As such, the directive to stay at home does not hold water. Those forced to venture outside out of need are being harassed on social media. It seems that while the credit for any success goes to the prime minister, the failures are attributed to the common people. If people clanging utensils truly revered doctors, they would not have forgotten Kafeel Khan, who is languishing in jail.