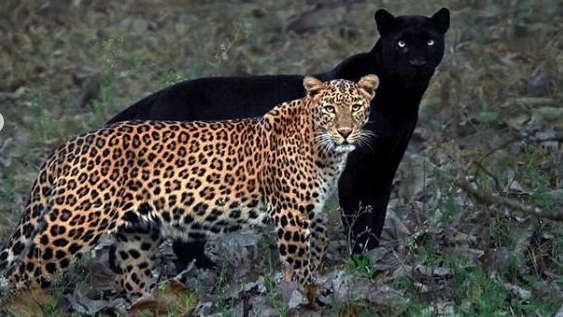 The internet is delighted with a photograph of a black panther and a leopardess couple shot by an Indian wildlife photographer.
Instagram/@mithunhphotography
The Telegraph   |     |   Published 26.07.20, 01:07 AM

Sir — The internet is delighted with a photograph of a black panther and a leopardess couple shot by an Indian wildlife photographer. Since the black panther is essentially a melanistic leopard, they have been known to mate with regular spotted leopard. It is still a striking shot with both animals staring right at the lens of the camera. Perhaps humans could take cues from the animal kingdom about not letting physical appearances get in the way of relationships. Surely, no one would want the black panther to apply a fairness cream and blend in with other leopards?

Sir — At a time when cricket is limping back to life across the globe with extreme precautions being taken to protect cricketers from Covid-19, old biases are once again beginning to surface in the world of Indian cricket. The Board of Control for Cricket in India has withdrawn the women’s side from the tour to England, citing logistical problems such as travel restrictions and assembling of training camps amid the coronavirus crisis. Such a concern might seem justified at first. But put it together with the news that at the same time the BCCI is also working to find a way to hold the Indian Premier League in the United Arab Emirates and a clear picture of age-old biases against women’s cricket emerges.

In the meantime, women’s domestic cricket in England is back on with the London Cup, weeks after the resumption of men’s international cricket in bio-secure bubbles. The South African women’s team will be going on their England tour and even New Zealand has begun training. The loss, then, is entirely India’s.

Even though Indian women cricketers have proved their mettle over and over again on the international stage, not to mention gained widespread adulation for it across the country, the BCCI seems bent on treating the team as poor cousins of the men’s side. What else can explain the fact that the women’s side is at present without a selection committee or for that matter a spokesperson in the BCCI since the resignation of Saba Karim? An advertisement for selectors was put up earlier this year, but an appointment is yet to be made. In the end, it all comes down to money. The IPL is a money-maker and men’s cricket fetches more revenue; this is why the BCCI is unwilling to invest in the women’s side. Merit clearly does not matter in this country.

Sir — On the one hand, we received the excellent news that women will finally be given permanent commission and be allowed to hold command roles in the armed forces. Around the same time came the news that the Indian women’s cricket team will not be going to England. This is most disheartening. Women have fought tooth and nail to be treated on a par with their male counterparts. Yet, the male-dominated BCCI has, once again, found a way to give women cricketers less than their due. It is time more women were made a part of the decision-making process in the world of Indian cricket. Otherwise, the future of the next generation of women cricketers — they have proven their worth time and again — is dark.

Sir — With A Suitable Boy having been turned into a miniseries and One Hundred Years of Solitude in the process of being turned into one, book lovers are worried whether the future generations will ever know the delight of reading these classics first-hand. Even the experience of hearing ebooks is mediated by voice actors and not the same as reading. Films made from books can be great, but nothing beats the experience of reading for oneself.

The promo on “Khan Market Memories” was an inadvertent error. Sunanda K. Datta-Ray’s article — and not the one mentioned in the promo — appeared on the opinion page on Saturday. We apologize for the mistake.