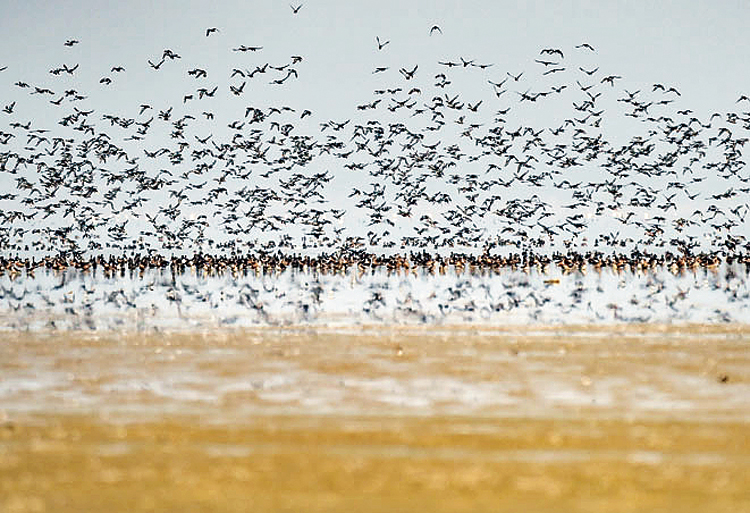 A flock of birds flies above the Sambhar Salt Lake in Rajasthan, on Monday, November 11, 2019. Thousands of birds of various species were found dead at the lake recently under mysterious circumstances
(PTI)
The Telegraph   |   Published 12.11.19, 07:06 PM

Sir — It is shocking that over 1,500 migratory birds of nearly 15 species were recently found dead around the Sambhar Salt Lake in Rajasthan. These include plovers, the common coot, the black winged stilt, northern shovelers and so on. This incident warrants serious investigation. While efforts are being made to find out the exact cause of this mysterious occurrence, it is of utmost importance that no more birds are exposed to such a death risk. The personnel working at the wetlands should also be given protective gear so that any chance of contamination can be prevented.

Sir — A few days ago, the nation’s leading industry association, the Confederation of Indian Industry, had said that India should join the Regional Comprehensive Economic Partnership (“Deal debacle”, Nov 7).

The RCEP was set to become the world’s largest trade bloc — even bigger than the European Union — and likely hold sway over 30-40 per cent of the world’s gross domestic product. The bloc, comprising the Asean countries, along with others like China, Australia and New Zealand, would have made business across the member nations easier, and created more trade opportunities for India.

However, India’s decision to opt out of the RCEP makes one wonder if it is turning protectionist. The long-term impact of protectionism is likely to be adverse for the country and its ordinary citizens. By turning inward and restricting the access of other nations to its domestic market, India has perhaps taken a step backward as far as economic opportunities and development are concerned.

The Union government as well as the governments of Assam and other northeastern states have been talking of the Act East policy for some years now. However, the fate of these initiatives may come to naught with India refusing to becoming a member of the RCEP.

Sir — China could have its own reasons to persuade India to join the RCEP. But India must also understand that most economies are getting globalized faster than we care to admit. An economic bloc could ensure a guaranteed quantum of business for its members that would help them set up a stable economic base. Besides, it would help leverage the group’s strength in numbers to gather the sort of bargaining clout that an independent economy is not likely to obtain.

Any trading bloc encourages productivity and innovation. This is beneficial, as it generates healthy competition within and outside the group. Staying out of associations like the RCEP could rob India of such opportunities. Manufacturing and leisure services have a great market, which could generate employment, help increase the GDP and lead to better wealth distribution. The problem is that every government tends to operate according to a time frame and perspective limited to its tenure. But business cycles usually last for more than 30 years, and they cannot be dealt with within the short span of time that governments have in mind. India saw many big reforms in the 1990s. To bring about the next set of reforms, trade must get far more serious attention. Trade pacts are more of an opportunity than a threat.

Sir — After a series of economic blunders in the past five years, better sense finally prevailed, and the Narendra Modi-led government walked out of the RCEP. Had India been a part of this pact, the 16 member countries under the bloc would have comprised almost half the world’s population, and accounted for 40 per cent of global commerce and 35 per cent of the world’s GDP. However, joining the group would have been catastrophic for India. It is likely that the country would go into recession, especially given the effects of the government’s policies such as demonetization and the implementation of the goods and services tax. India also had a big trade deficit with the other countries in the bloc.

It seems that the saffron party has paid heed to some level-headed advice, and decided against making India a dumping ground for the rest of the members of the RCEP.

Sir — Withdrawing from the RCEP is a wise step for India at the moment, because a free trade agreement would invariably lead to trade-surplus nations holding sway over the rest of the members. At present, India has trade deficits with at least 11 of the members in the pact. As such, the nation would not have been able to brace itself against further challenges. However, this does not mean that we should become protectionist. The country must stabilize its own finances soon and then continue to participate in healthy, international trade pacts.