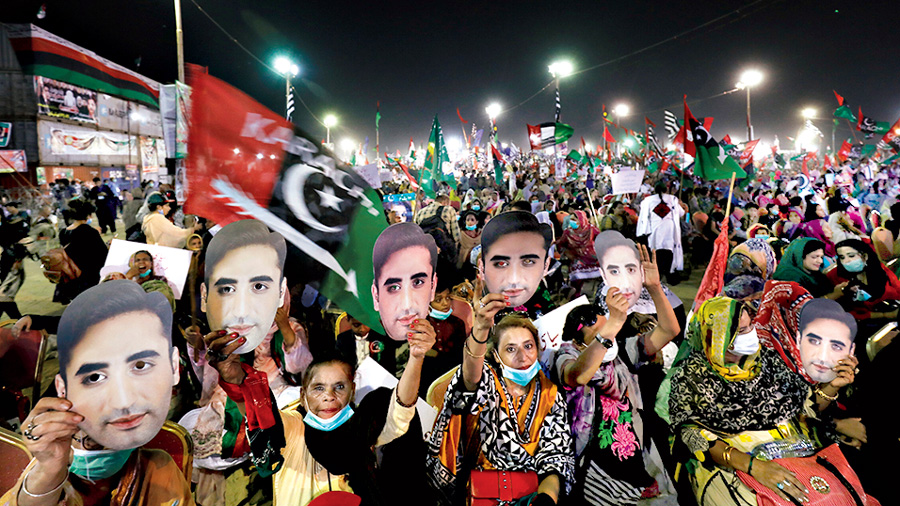 October has been quite a roller-coaster ride for political buffs in Pakistan. Last month, the Opposition parties made an alliance called ‘Pakistan Democratic Movement’. On October 16, the PDM held its first jalsa in Gujranwala, Punjab. Gujranwala being a stronghold of the Pakistan Muslim League (Nawaz), it was expected to be a show of power by the Opposition alliance. The chairman of Pakistan Peoples Party, Bilawal Bhutto-Zardari, was there as well as Nawaz Sharif’s daughter, Maryam Nawaz, Maulana Fazlur Rehman and several others. The former prime minister, Nawaz Sharif, addressed the rally through a video link. Earlier this month, the Pakistan Electronic Media Regulatory Authority had banned the broadcast of speeches, interviews and public addresses by absconders and proclaimed offenders on television. Thus, Nawaz Sharif’s speech was not shown on television. Despite the television ban, Nawaz Sharif’s aggressive speech was discussed by the prime minister, cabinet ministers and other members of the ruling party. The Gujranwala rally was seen as a successful event by the Opposition even though government representatives dismissed it as a failure.

The PDM rally in Gujranwala set the tone for the anti-government movement. Two days later, the PPP hosted a PDM rally in Karachi, Sindh. The PPP rules the Sindh province. It was a grand show with a massive crowd. This time though, Nawaz Sharif did not address the rally. However, the success of the Karachi rally was marred by the arrest of Maryam Nawaz’s husband, Captain (retd) Safdar, in the early hours of the morning from their hotel room in Karachi. The arrest was due to a first information report filed against him for trespassing into the restricted area surrounding the grave of Quaid-e-Azam Muhammad Ali Jinnah and raising political slogans at his mausoleum. This was in violation of laws that prohibit political activities at the founding father’s mausoleum. Safdar’s arrest would not have garnered so much attention had it not been for the way it was carried out. Around seven in the morning, Maryam Nawaz tweeted that the police broke into the room of the hotel where they were staying and arrested Captain Safdar. The Sindh government denied any involvement in the incident and even the PDM leadership, including Maryam Nawaz, did not blame the PPP or the Sindh government. Rumours began about an incident regarding the Sindh police chief that led to the arrest of Safdar. Those rumours were reinforced when the police chief and many other officers submitted leave applications the next day. As a result, Bilawal Bhutto had to address a press conference asking the army chief to investigate what had actually transpired. The army chief ordered an immediate inquiry into the matter. The Sindh police then tweeted that the department is “immensely grateful to the Army Chief for realising the sense of hurt that prevailed within a uniformed force, and for promptly ordering an inquiry into the matter” and that the police chief had deferred his own leave and ordered his officers to set aside their leave applications for 10 days “in the larger national interest, pending the conclusion of the inquiry”.

While all this was going on, some Indian media outlets took it upon themselves to spread false news about a civil war in Karachi after ‘clashes between the police and the army’. All of this was obviously untrue. There was no violence at all, let alone clashes between the two institutions. While Pakistani Twitterati had a field day mocking the Indian media for their absurd and baseless claims about ‘civil war’ and ‘clashes’, one wondered why some of these Indian media outlets chose brazenly not to report facts. One senior Indian journalist told the BBC that a quick study of Twitter handles tweeting this misinformation will show that most of them are supporters of or affiliated to the ruling Bharatiya Janata Party. It is unfortunate but understandable that media groups that are tilted in favour of the BJP or Twitter handles supporting India’s ruling party would be accused of spreading misinformation about Pakistan. Ethics or factually correct reporting are not really their priority.

The PDM’s third rally took place yesterday, this time in Quetta. The Opposition rallies are gaining momentum but we still do not know what the end result will be. The Opposition says it will get rid of the government by the end of this movement in a few months but how it will achieve this goal is yet to be revealed. Some analysts say that the government is quite confident that it is not going anywhere; some others say that there is panic in the government ranks. But it is too soon to speculate. The government may be facing a tough time due to rising inflation and a slow economy but whether these factors lead to some sort of mass movement on the ground remains to be seen. The Opposition may be banking on public sentiment but whether the people themselves are ready for political instability is something that only time will tell. However, I do feel that civilian governments should complete their five-year tenure in order for democracy to be genuinely strengthened in Pakistan. The government should sit and talk with the Opposition and start a national dialogue. It would go a long way in helping Pakistan’s nascent democracy.

On an aside, October 24 was World Polio Day. Pakistan and Afghanistan are the only two countries that are left with this preventable disease. It is time for us to put an end to all conspiracy theories related to polio and ensure that like the rest of the world and, more recently, like Africa, we too would be polio-free soon. Pakistan has been quite successful in dealing with Covid-19. We can hopefully be successful in eradicating polio in the coming years.