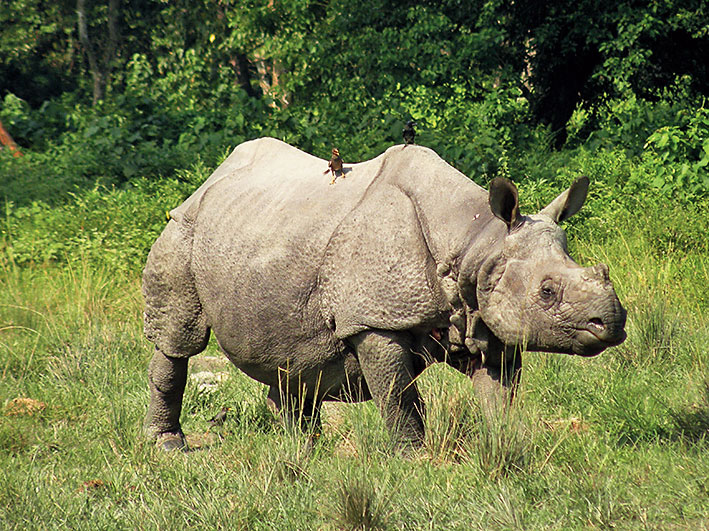 Sir — It is unfortunate that the carcass of an adult female rhinoceros was found with the horn missing in the Jaldapara National Park. The poachers reportedly used sophisticated firearms to kill the animal and sharp weapons to cut the horn. The authorities should arrest everyone involved in this crime at the earliest. They must also intensify surveillance in the park in order to ensure that such incidents do not recur.

Sir — In her article, “The norm is now the exception” (Oct 31), Devi Kar seems to sincerely regret the vanishing values in India as is evident from our day-to-day conduct in society. Indeed, what used to be considered unusual has now become the norm, and the normal appears extraordinary. The instance of the prime minister, Narendra Modi, picking a few flowers off the ground at an airport would normally be considered an ordinary act, but it is now being looked at as an exceptional gesture. Similarly, we have become used to the carefree, even careless, conduct of children once they are outside school, or the doctor attending to patients way past the time of the appointment. These things rarely surprise us.

We also take for granted that the more important a person is, the later he will arrive to grace some social event with his presence, as if his position is well above everyone else’s. It has become the norm to jump queues, yell in public, leave washrooms dirty, talk among ourselves during a conference or in a cinema hall and honk needlessly, paying little heed to how our behaviour disturbs others.

This is perhaps because raising questions itself has ceased to be normal, and is likely to evoke displeasure. We consider it acceptable to live in a society where no one cares about causing inconvenience to others. Many children cannot even look up to their parents as role models. So a casual gesture is treated as an extraordinary example of good conduct.

Sir — Based on her observations on human behaviour in daily life, Devi Kar has rightly argued in her article that what used to be the norm in society is now considered the exception. It is true that in modern times, certain behavioural changes among the people in the country have become apparent.

These changes could be a result of the way in which people lead their lives — under severe constraints of time and money. The lessons related to normal behaviour that they had learnt as children in schools increasingly appear to be in direct conflict with the ways of the world as they grow up. Therefore, when they face challenging situations, they tend to prioritize their own interests. This makes them stray from the expected behaviour, which is directed towards the common good. The consequences are there for all to see. One wonders if this is a trend only in developing countries like India — where the socio-economic conditions are relatively unstable and not everyone is properly schooled — or if citizens of developed nations are also undergoing similar problems.

Sir — It is difficult to not concur with every word in Devi Kar’s article. I have personally been witness to the scant respect certain children have towards their teachers. This is appalling for the elderly, who are not used to such conduct.

It is unfortunate that Indians have come to be known for flouting rules rather than obeying them. Instances of indiscipline of all kinds abound in society these days. Small courtesies and good behaviour have become a thing of the past. But civilized conduct does not cost time or money. All one needs for being polite and gracious is mindfulness.