Armenia and Azerbaijan have been fighting over Nagorno-Karabakh, which is controlled by Azerbaijan but is populated by people of Armenian ethnicity, since 1991 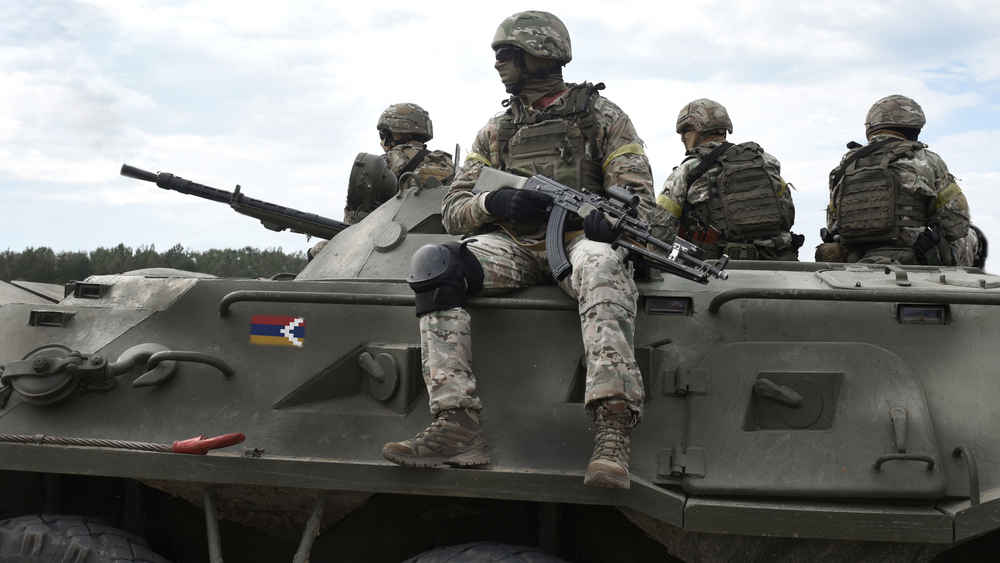 Flag of Artsakh and also known as Nagorno-Karabakh Republic on an armored personnel carrier and soldiers with machine guns.
Shutterstock
Prabhakar Singh   |   Published 15.10.21, 12:21 AM

Armenia and Azerbaijan were in the news in September 2020 on account of their territorial dispute in Nagorno-Karabakh. On September 16, 2021, Armenia instituted proceedings against Azerbaijan before the International Court of Justice for alleged violations of the International Convention on the Elimination of All Forms of Racial Discrimination. On September 23, in a copycat move, Azerbaijan approached the ICJ, accusing Armenia of CERD violations, requesting the ICJ to direct it to “immediately cease and desist” from endangering Azerbaijani lives by “planting of landmines in Azerbaijan’s territory”.

Armenia and Azerbaijan have been fighting over Nagorno-Karabakh, which is controlled by Azerbaijan but is populated by people of Armenian ethnicity, since 1991. Nagorno-Karabakh is to Armenia what Crimea was to Russia with Azerbaijan in Ukraine’s shoes. Armenia’s application to the ICJ notes that the Azerbaijani president “routinely” uses derogatory language to brand ethnic Armenians as “bandits” and “barbarians”. The clash over Nagorno-Karabakh erupted with a musically choreographed threat of use of force — a first of its kind — with Azerbaijan’s army releasing a death metal music video touting its military might. According to Armenia, a stamp issued by Azerbaijan sought to ‘commemorate’ Baku’s violations of CERD by depicting a Nazi-style chemical ‘disinfecting’ Nagorno-Karabakh.

Armenia announced full mobilization in response. António Guterres paid the customary lip service expected of a UN secretary-general. Meanwhile, Iran, which borders both Azerbaijan and Armenia, offered its good offices for peace talks. Turkey spoke in support of Azerbaijan. Russia, a traditional ally of Armenia, called for an immediate ceasefire.

In 2008, the ICJ had found no jurisdiction when Georgia took Russia to the ICJ for CERD violations even as the court allowed provisional measures. Now Armenia has decided to invoke similar charges against Azerbaijan. In the Mavrommatis Concessions case, the Permanent Court of International Justice ruled a “dispute” to be “a disagreement on a point of law or fact, a conflict of legal views or of interests between two persons”. The ICJ’s advisory opinion in the Interpretation of Peace Treaties with Bulgaria, Hungary and Romania case defined a legal dispute in relation to a Convention as “a situation in which the two sides held clearly opposite views concerning the question of the performance or non-performance of certain treaty obligations”.

The CERD is an international convention to which both Armenia and Azerbaijan are signatories. All “good-faith” efforts, Armenia claims, for putting an end to Azerbaijan’s violations of CERD have failed. Article 22 of CERD allows the ICJ’s jurisdiction for treaty parties. The Armenian application to the ICJ contends that “[f]or decades, Azerbaijan has subjected Armenians to racial discrimination” and “Armenians have been subjected to systemic discrimination, mass killings, torture” that are illegal under CERD. Armenia further alleges that the end of hostilities and the November 2020 ceasefire notwithstanding, Azerbaijan has continued to “engage in the murder, torture and other abuse” of Armenian prisoners of war. In a prayer to the ICJ, Armenia has demanded that Azerbaijan release all Armenian PoWs and refrain from “espousing hatred” of Armenian ethnicity by “closing or suspending the activities of the Military Trophies Park”. A cursory reading of CERD makes it obvious that Azerbaijan is in violation of Article 5, recognizing political rights, civil rights, and equality before courts as well as right of access to “restaurants, cafes, theatres and parks”. Armenia has also asked for reparations from Azerbaijan under Article 6 of CERD.

With no legal basis for a ‘comprehensive settlement’ of the Nagorno-Karabakh dispute by international courts, Armenia lacks the military power or the appetite for actions that are illegal under the UN Charter. By championing people-centricity in an unsettled territorial dispute, Armenia is decentring an international law obsessed with territory and states.