Come out to play Twister

AMERICAN DIARIES: The TWA hotel at JFK airport is fun for both young and old 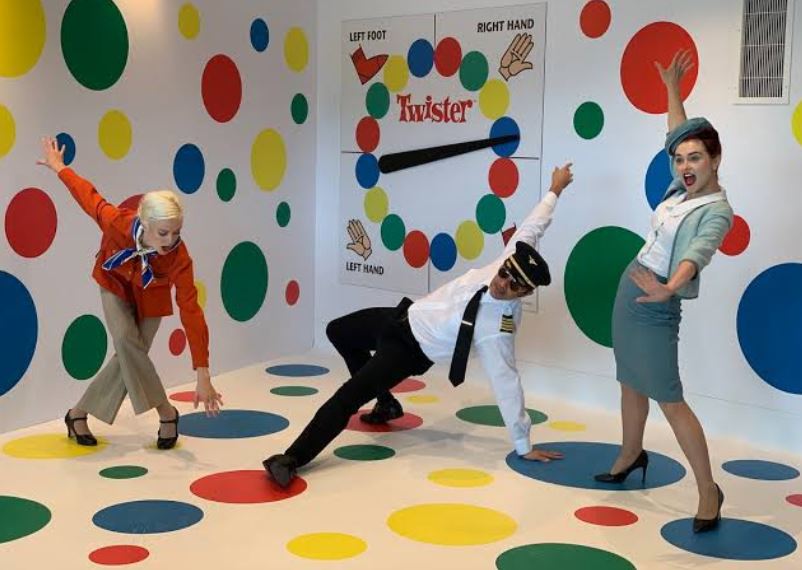 Take a look at some happenings across the United states of America.

Come out to play

Most of us may remember the classic game, Twister, the greatest test of flexibility on a small mat with colourful circles. A Twister room opened up in the TWA Hotel at the John F Kennedy International Airport, and is big enough for even adults to play. The Twister room is located just off the hotel’s main lobby; guests and visitors can walk in and start a game on their own. The giant spinner is situated on the back wall. The TWA Hotel’s theme has a 1960s vibe, an era in which the game was most popular. It first came out in 1966.

“When Johnny Carson played the new game of Twister with actress Eva Gabor on The Tonight Show in 1966... a party craze was born,” said the folks at the hotel in a statement. “The TWA Hotel’s Twister Room offers visitors, both young and old, a fun, nostalgic experience; win or lose, there’s always a cocktail waiting at the adjacent Sunken Lounge.”

This is the same hotel that created the 56-by-44-feet “Runway Rink”, open from November 30 all the way to the end of February. A vintage Lockheed Constellation aircraft known as the ‘Connie’ that was restored and then displayed in Times Square is now serving as a cocktail lounge at the hotel.

After the tragic death of the legendary basketball player, Kobe Bryant, a tribute quickly went up at the Bryant Park station. On Monday morning, commuters came upon a sign that had been tweaked by a fan to read, “Kobe Bryant Park”. It is similar to the sign that the fans of Aretha Franklin made at the Franklin Avenue stop in Brooklyn when she passed away in 2018. (The Metropolitan Transportation Authority decided to keep that sign.) Since then, numerous tributes to Bryant have cropped up around the country. Madison Square Garden, which lit up in Lakers colours, had 24 seconds of silence before the Knicks game on Sunday night.

Australia Day was on January 26. In the light of the tragic bushfires, the country needs global support now more than ever. The day marked the anniversary of the 1788 arrival of the First Fleet of British ships at Port Jackson, New South Wales, and the raising of the Flag of Great Britain at Sydney Cove by Arthur Phillip. The date has long been a difficult symbol for many Aboriginal and Torres Strait Islander people, who see it as a occasion for mourning. Some municipalities have cancelled festivities out of respect for indigenous Australians. This year people skipped the usual outdoor barbecues and picnics and took to the streets to march in solidarity with the nation’s indigenous people. While July 4 in the United States of America is a day of celebrating the US’s independence from the British, Australia Day is about the British coming to Australia. However, in recent years the day has come to signify the celebration of the diversity of Australia as well. The bushfires have destroyed millions of acres of land and up to a billion animals in Australia. The San Diego Zoo in California hosted a series of activities to raise awareness and funds in honour of Australia Day. The zoo and the safari park promoted ‘End Extinction’, where guests can donate to vital emergency funds for the continent’s wildlife. The zoo also held a special one-day-only admission match, where it donated more than $5,00,000 to relief efforts in Australia.

Food from the skies

Food delivery has come a long way. A Maryland-based start-up is launching a new delivery system called ‘Hangry’ that plans to partner with restaurants to deliver products by rope from a drone. “Hangry’s long-term goals for the food delivery industry are to alleviate high prices, long wait times and driver errors. While competition like Uber Eats, DoorDash, and other similar services take over the roads, Hangry... plans to take to the skies,” reports a local television station. The company is currently working with universities and businesses to get designated drop zones and deliveries going.

In November 2016, Domino’s Pizza delivered two pizzas via drone to a suburban area near Auckland, New Zealand. The process involved a drone that pilots itself based on GPS navigation and other sensors, from the drone delivery service, Flirtey. A new report from McKinsey & Company says that people are expecting faster and more on-demand delivery choices, which will drive drones as delivery options in the next decade. The biggest challenge is on regulatory matters involving safety and reliability of the drone systems. Companies such as Amazon, Google, Drone Delivery Canada and Flirtey, and governmental agencies throughout the world are pushing the matter.