The book restricts Ambedkar within his own life and times, and locates him on a transnational stage as one of the world's few 'immortals' 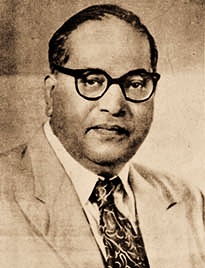 The other process is that of factionalisation. To paraphrase Choudhury, it represents a refusal to compromise on Ambedkar's divisive appeal, to preserve his potential as a philosopher who can rupture the consensus within mainstream institutions of teaching-learning and research, and, by corollary, the nation state itself. This is the Ambedkar who speaks to the Ambedkarite student-activist in contradistinction to the ivory-towerish scholars who prefer to study a harmless version of Ambedkar.

The notion of breakdown of consensus and its consequences in social life are highlighted in the first two chapters. The polemic between 'anachronism' and 'anathema' informs the chapter on Ambedkar's critique of Gandhism. He takes Gandhi to task for the use of 'anachronism' rather than 'anathema' to express disapproval of caste. Thus he points to the bad faith in Gandhi's apparent abjuration of the caste system.

Soumyabrata Choudhury's book is rather different from other books on Ambedkar. It focuses on Ambedkar's thought rather than on his role as a public figure, whether as the leader of the so-called depressed classes or as the convener of the drafting committee of the Constitution or as independent India's first law minister. It also assesses Ambedkar as a thinker by fitting him into a galaxy of other thinkers, from times ancient and modern. So it refuses to restrict Ambedkar within his own life and times, and locates him on a transnational stage as one of the world's few 'immortals'.

The term 'immortal' is intended to denote an idea or a norm, the 'norm of equality', or the 'axiom of equality'. Its attribution to people such as Pericles, Aristotle, Gandhi and Ambedkar occurs only if and when they enable or enact the upsurge of the axiom of equality.

Ambedkar can be regarded in one of two ways. The common mode seeks to appropriate him into the framework of dominant discourses and disciplines. This project of domestication seeks to retrieve Ambedkar from his exceptional radicalism as a thinker. Choudhury calls it the process of universalisation.

A more audacious venture on Choudhury's part is to compare and contrast the idea of 'debt' underlying Athenian democracy in the fifth century BCE and the idea of 'caste' underlying the Hindu social order. His conclusion is that, in spite of the analogies between 'caste' and 'debt' and their roles in upholding the power structures in their respective contexts, the Athenian social order, which denied membership to certain categories (women, foreigners and slaves) was still more humane than the caste arrangement which allowed admission to its fringe population (the lowest caste and the outcasts) only to brutally oppress them.

The most far-fetched, yet far-reaching, juxtaposition in the book is that between Ambedkar's speech at the venue of the Mahad Satyagraha in 1927 and the funeral oration delivered by Pericles in the fifth century BCE to honour the soldiers who had died fighting the Spartans. Pericles' address assumed an always already perfect democracy in Athens. But Ambedkar never viewed Indian democracy in that light even after the republican Constitution had been enacted and enshrined. For him, the attainment of democracy could never be a finished project. It would, indeed must, be a continuum which pursues an aspirational ideal. Like the axiom of equality, democracy too is an axiom.

Nowadays when Ambedkar scholarship has become an industry, Choudhury's thesis approaches him from an entirely new perspective.