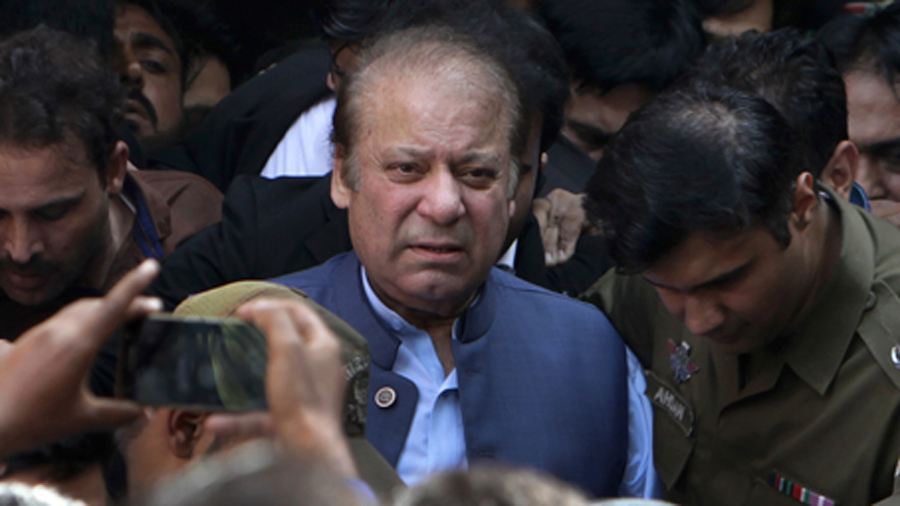 The confrontation between the political class and the Pakistan army reached a tipping point hours after the massive show of strength in Karachi by the 11-party Pakistan Democratic Movement (PDM) opposition alliance. The opposition rally had been held symbolically 13 years to the day after former prime minister Benazir Bhutto landed in the city and a bomb intended for her killed 200 people. Last Sunday’s rally was a huge success, and the government was clearly desperate to drive a wedge between the PDM’s leaders who have defeated the odds to come together.

Within hours the murky story behind the raid surfaced. Reputed journalist Hamid Mir tweeted how the para-military Pakistan Rangers had forced their way into the Sindh police chief’s house at midnight and taken him to police headquarters where he was made to issue a warrant for Safdar’s arrest. The Sindh police chief and the entire police force have threatened to go on mass leave, though they’ve suspended this for the time being.

Safdar’s arrest was clearly a clumsy attempt to split the PML-N and the Pakistan People’s Party (PPP), which runs the Sindh state government. In the event, it was such a ham-fisted operation that it backfired on its proponents. The PPP government in Sindh is already accusing the Karachi ISI head, Brig. Habib, of acting under the orders of Prime Minister Imran Khan’s trusted confidante, the ISI chief Lt. Gen Faiz Hameed.

Most importantly, it reinforces the opposition’s charge that the army is playing an outsize role in all major political events for the worse. That’s always been an open secret but nobody dared to point a finger at the army as Nawaz has dared to do in the last few weeks.

Seemingly impervious to criticism in the wake of the Capt Safdar debacle, it was the Chief of Army Staff Gen. Qamar Javed Bajwa, and not Prime Minister Khan, who called PPP chief Bilawal Bhutto Zardari, to discuss launching an inquiry.

Gen Bajwa’s effort to step in and staunch public anger, is probably too little, too late. And he hasn’t been able to put the brakes on the opposition campaign to oust the Imran Khan government. On October 25, the PDM will stage its third mega-rally in the Baloch capital Quetta. Unless the army rolls out its tanks, the black and white striped flags of the powerful religio-politician Maulana Fazlur Rehman’s Jamiat-Ulema-e-Islam (Fazlur), will dominate the landscape alongside that of Sardar Akhtar Mengal’s Balochistan National Party’s green, white and red.

Unlike previous alliances, this opposition group is not limited to the two mainstream parties, the PML-N and the PPP. The PDM, has tapped into the undercurrent of rage that consumes the Balochs, Pashtuns, Sindhis and the Urdu-speaking populace, and brought all their voices together on one platform.  On the stage at Karachi’s Bagh-e-Jinnah venue was Mohsin Dawar of the Pashtun Tahafuz Movement, whose youthful leaders have “disappeared” in targeted killings, their mutilated bodies left by the roadside, in a chilling message to those who criticise the army. Once at loggerheads with one another, this is a political opposition that for the first time, speaks for all of Pakistan.

But Nawaz’s PML-N holds the high cards.  The party has the key to Punjab and it showed this by holding the first PDM rally in Gujranwala, the heart of the army’s traditional recruiting ground. Every second house here is either the home of a fauji or a Muslim Leaguer. This was challenging the army’s writ like never before.

By choosing Gujranwala for the PDM rally Sharif demonstrated how adept he has become at stoking ‘People Power’, and how well, he understands the army’s weaknesses and his own strengths. At the Gujranwala rally, the three-time former prime minister, speaking from exile in London, held Gen. Bajwa personally responsible for his manipulation of the last elections and installing the “incompetent” Imran Khan, as prime minister.

He also once again called out Gen Bajwa - to whom he had given a three-year extension - for the gross mishandling of the economy by Khan. This tapped strongly into the groundswell of public anger triggered by the rising prices of essential goods.

The final twist of the knife was the calling out of Gen.(Retd) Asim Salim Bajwa, who was also Khan’s former media adviser, for corruption. It’s alleged that Asim Bajwa set up a fast-food chain in the US, Pakistan and the UAE by skimming money from the treasury.

No details of the scam are now available on Pakistan media. There is a blackout of both Nawaz’ speeches, his televised address that marked the launch of PDM in September, and Friday’s evisceration of the army at the PML-N citadel Gujranwala. Besides that, no channel has aired the speeches by Mengal and Dawar and the others.

Nawaz didn’t address the Karachi rally, but with no let up from either Bilawal, the Maulana or Maryam. Imran Khan, army chief Bajwa and Gen Faiz Hameed, the ISI chief, have clearly been put on notice.

Some analysts in Pakistan are splitting hairs, saying the PDM is not attacking the army per se but the ‘Gang of Three,’ but there’s no doubt that the PDM will settle for nothing less than their ouster, the army’s return to the barracks and free and fair elections to elect a government of Pakistan’s choice.

The next stop on the opposition’s calendar is a rally in Peshawar, followed by another in Multan on November 30. The grand finale will be when the opposition roadshow reaches Lahore on December 13. In January, barely 90 days after the campaign launch, the opposition is scheduled to converge on the capital, Islamabad

Few expect the Bajwa-Imran-Faiz trio to buckle in the face of this political juggernaut. Insiders say that Imran Khan’s Pakistan Tehreek-i-Insaf party is exploring the option of imposing martial law, though the army is less enthusiastic about this course of action. The targeted killings and incarceration of opposition leaders and their kin against whom cases are being filed are an indication that the Khan government is set to continue on the same path. Even before the Karachi rally ended, the pro-government media began leaking the story that Shahbaz Sharif, the incarcerated brother of Nawaz, was willing to step in as prime minister of an interim government before fresh polls are called. The Nawaz camp was quick to deny any such overtures had been made, let alone accepted.

The Sharif patriarch has in fact, come full circle. Picked by President Gen. Zia ul Haq to counter the rising popularity of Benazir, he has now had multiple run-ins with successive military putschists, that left him convinced the army has no place in civilian life.

That Imran Khan is rattled is obvious. A few weeks ago he talked in public about how, during the last elections, a PML-N legislator had reached out to former ISI chief Lt. Gen (retd) Zaheer-ul-Islam and begged him to save his seat. Imran was trying to say that even PML-N legislators had sought the ISI’s help. But this turned out to be a self-inflicted ‘doosra’ because he was openly admitting the ISI’s role during the elections. Imran’s comment came after Nawaz had accused the army chief of fixing the polls. against him.

The PDM, aware of the army’s dirty tricks, is working to a plan. Its leaders’ criticism of Khan’s – and India’s - mishandling of Kashmir and Gilgit-Baltistan, was to pre-empt the charge that Nawaz or the PPP chairman and former president Asif Ali Zardari are working at India’s behest. Both leaders attempted to forge a new India-Pakistan narrative that went against the army’s strategy of permanent war, but were thwarted by their respective military chiefs. With Nawaz’ Islamic credentials - like Maulana Fazlur Rahman’s – above reproach, and backed many say, by Saudi Arabia, the army has limited cards left to play. It’s no surprise the pro-establishment Jamaat-e-Islami has been tapped to hold rallies to counter Nawaz’s people power.

Nawaz has openly charged the incumbent army chief with high treason so how can a compromise be reached? One possibility is that Imran will be the fall guy and be shown the door. But Gen Bajwa too is not in an impregnable position. It’s said that his extension after his three-year term ended, did not go down well with the next rung of generals. As the army stumbles headlong into uncharted territory, the 90 days in the run up to the Siege of Islamabad, will be crucial.

(Neena Gopal is a South Asia analyst and author)