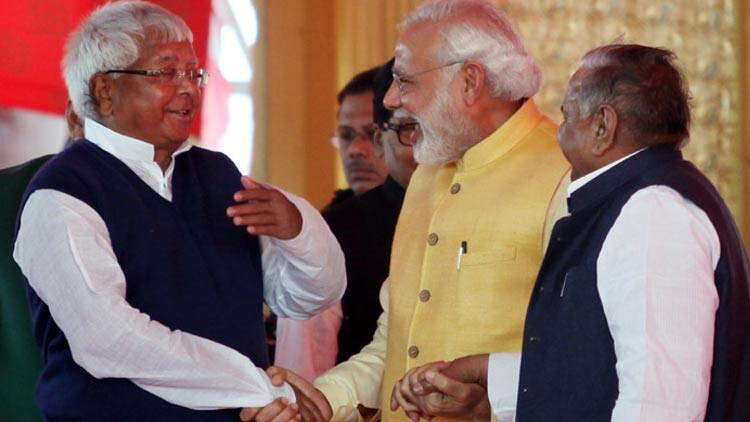 The popularity of the prime minister, Narendra Modi, continues to baffle his critics. They ask — ‘what did Modi create in these six years?’ But that is the wrong question to ask. His appeal stems from not what he has created but what he has destroyed, and continues to destroy — a discredited status quo. In this respect, his enduring mass appeal, in the absence of tangible achievements, is similar to that of Lalu Prasad in his heyday. Lalu’s mass appeal, which made him Bihar’s undisputed leader for over 15 years, had similarly confounded analysts. A study of the parallels between the two leaders might illuminate what it would take to successfully challenge Modi.

If you look at the biggest political moves of Modi over the last six years — demonetization, Article 370, the goods and services tax, farm and labour bills — they follow a simple political logic. Modi rose to power in a society teeming with aspirations. These aspirations, embodied particularly by a neo-middle class, were released by liberalization but not quite fulfilled. The ingeniousness of Modi was to conflate these thwarted aspirations with a system of power, which was deeply corrupt and captured by vested interests. This was the old status quo, which was thoroughly discredited in 2014.

But Modi keeps reminding voters that the old systems of power are still alive, having entrenched themselves over ‘70 years of misrule’, and that dismantling them would be a long process. He thus demands, and largely receives, the patience of the electorate. Only after ‘Old India’ has been destroyed will ‘New India’ be built.

All his marquee political moves are centred on this narrative of the destruction of the old status quo. Demonetization was supposed to destroy the black economy. GST was needed to clean the corrupt informal economy. Article 370 was revoked to dismantle the corrupt hold of the Abdullahs and the Muftis (as well as the vested interests of the separatists) on the state, which had kept Kashmir backward and prevented its integration. The recently passed farm bills would uproot the entrenched middlemen that had frustrated the modernization of agriculture, much like the labour bills that would destroy an ensconced labour aristocracy that has hampered rapid industrialization.

In contrast, Modi has been poor at building new systems to replace the old ones. India’s Kashmir policy is in tatters, GST implementation was a mess, demonetization was an unmitigated disaster, and there is no clarity on the new farm and labour regime. Unlike Jawaharlal Nehru, Modi lacks both the will and the capacity to be an institution-builder. And yet, the dramatically simple and reductive logic undergirding these narratives, far from being a weakness, is actually their main strength. A good political narrative is essentially a simple one, as the example of Lalu shows.

Much like Modi, Lalu’s rise to power represented the casting away of the old order. From the late 1960s, there was an emerging political consciousness among the backward castes in Bihar — moulded by leaders such as Ram Manohar Lohia, Jayaprakash Narayan and Karpoori Thakur. The political aspirations of these peasant castes had been whetted by the gains of the Green Revolution. The old upper-caste dominated order, embodied by the upper-caste dominated Congress, had become discredited by the time Lalu became chief minister in 1990.

Again, like Modi, Lalu’s subsequent politics centred less on building a reformed Bihar, which would materially benefit his political base, and more on symbolic fights against the old upper caste order. The political slogan of his then Janata Party was ‘Vikas Nahin, Samman Chahiye (We need dignity, not development)’. As the political scientist, Jeffrey Witsoe, wrote, Lalu mobilized the backward castes not through policy initiatives but by appealing symbolically to themes of dignity. The main focus of his rule was to undo the upper caste control of the State, which involved regular confrontations with the upper-caste controlled police, bureaucracy and the judiciary.

Unsurprisingly, this political style of conflict deepened, what the political scientist, Atul Kohli, had termed the “crisis of governability” in Bihar. The state continued to lag in education, health and jobs. The problems of law and order and corruption, which were already severe in previous Congress regimes, continued to fester, if not worsen. Yet, Lalu remained the tallest leader of Bihar and returned with an even bigger victory in 1995. Populist showmen, like Lalu and Modi, are, for a period, immune to attacks on governance because they can easily turn criticism into validation. The critics are framed as the vestiges of the old order, perennially whining at their loss of power and status. Lalu termed all his corruption scandals as the conspiracy of upper-caste investigative agencies and the judiciary. And the marginalized identified with Lalu as one of their own, like many poor and neo-middle class Indians identify with Modi (‘son of a tea seller’) and gave him a long rope. Lalu’s rule had socially and politically empowered the backward castes and they didn’t want a return to the old upper-caste dominated political order. In his symbolic fights, they saw one of their own challenging the despised system that had kept them down.

Yet, as Lalu discovered, in 2000, when he lost his majority, and in 2005, when he was shunted from power, popularity can’t last forever if you don’t ultimately fulfil material aspirations. Modi might be coasting now through a prolonged economic downturn and a slump in job creation, but the situation can drastically change by 2024. A long rope, too, has its limits.

But the lesson from Bihar is it can’t happen without an alternative political vision. Simply attacking the government doesn’t work. Nitish Kumar promised a “Nutan Bihar” (New Bihar), not a return to the old order. Jeffrey Witsoe and Francine Frankel noted that Nitish Kumar displaced Lalu because he “was the ideal political figure to combine the themes of development and social justice, something Lalu had never managed to deliver in combination.” But he didn’t stop at rhetoric; he skilfully politicized and cultivated a coalition of extremely backward castes, which felt themselves marginalized under the increasingly ‘Muslim-Yadav’ rule of Lalu. Along with his ‘natural’ base of Kurmis and Koeris, with a smattering of Pasmanda Muslims, this was a winning coalition when allied with the upper caste base of the Bharatiya Janata Party. But, unlike Lalu, he didn’t simply project himself to be a backward-caste leader. He also appealed to an aspirational voting bloc that wanted clean politics and material benefits.

If we are baffled with the popularity of Modi, we must also ask what is the alternative vision the Opposition is offering. The Congress still suffers from the taint of corruption and encrusted privilege. Most of its prominent young leaders come from political dynasties and it is de-facto led by fourth-generation dynasts of the Nehru-Gandhi family. Of late, it has been trying to emerge as the party of the backward castes, Dalits and Muslims, but its attempts at mobilization on the ground have been feeble and episodic. Its leadership crisis has meant that there is a lack of clarity on what the party stands for.

Similarly, many regional parties passively hope that the Congress’s depleting social base will return to them on their own without attempting to reconfigure their politics from the 1980s to meet the realities of 2020. Yes, Modi comfortably survived the migrant crisis but the question is which party seriously attempted to use this crisis to politicize the urban working classes and make them part of their political coalition.

The old political system lies discredited, and Modi’s eclipse, when it happens, will likely be to a new form of politics. The trouble is that it is hard to see this new politics anywhere on the horizon.