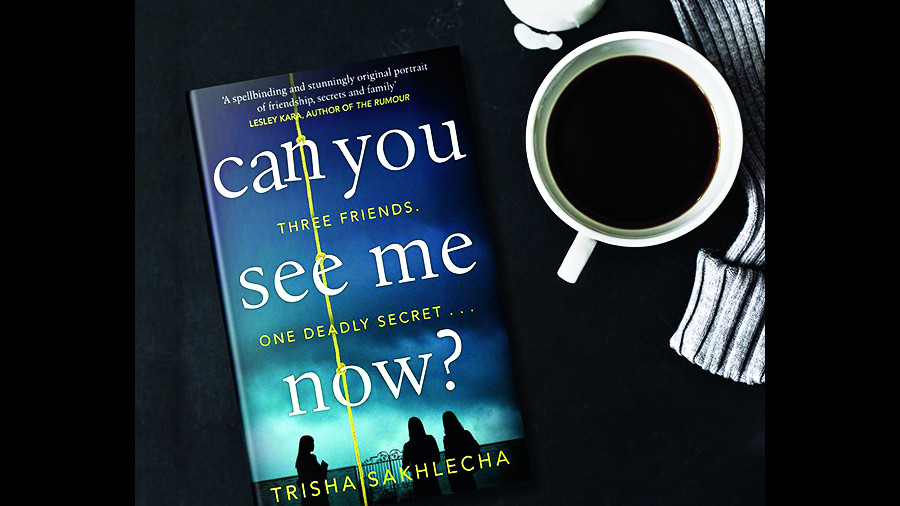 I won’t give away the twist in Trisha Sakhlecha’s recently published novel, Can You See Me Now? but I was so shocked I had to read it again. The tale is about 16-year-olds, Noor Qureshi and Sabah Khan, at Westcott, an exclusive school in India, who are joined by Alia Sharma, an arrival from London. They become best friends but then dark things happen, ending up with Noor’s funeral.

Trisha laughs and assures me these girls are nothing like her own best friends from Delhi Public School, where she went before studying fashion in Mumbai and Bangalore. At 22, when she settled in London, she did a creative writing course at the Faber Academy. A “sex scandal” incident similar to one which had happened at her school is woven into the plot. Trisha thinks it’s unfair that the girl — rather like Noor — was pilloried, while nothing much happened to the boy. Her intriguing novel moves backwards and forwards 15 years, which explains why Trisha used a spreadsheet to cope with the “many moving parts”.

Trisha should be at her home in London, but is in lockdown in Bhopal, where her father, Om Prakash Sakhlecha, is an MLA. Her late grandfather, Virendra Kumar Sakhlecha, was once the Madhya Pradesh chief minister. Trisha chose not to go into politics — though she features communal tensions in her novel — but to combine writing with fashion. As a child she enjoyed Enid Blyton’s Famous Five and The Secret Seven stories and “adored” Agatha Christie. “Donna Tartt’s The Secret History has also been a huge source of inspiration and Jhumpa Lahiri and Kamila Shamsie are two authors I keep going back to again and again.” I discovered we love one poem in common — “The Highwayman” by Alfred Noyes.

Perhaps as a treat to listeners on Valentine’s Day, Malala Yousafzai was a guest on BBC Radio 4’s Desert Island Discs, where guests reveal something of their private lives while picking eight pieces of music. Malala’s choices were mainly Pakistani compositions, but she did pick Justin Bieber’s “Never Say Never”; “All I Ask Of You” from the musical, The Phantom of the Opera; and Peter Asher’s “Love Always Comes as a Surprise” from Madagascar 3.

She admitted she had become a big fan of British TV comedy, such as Yes Minister. Malala, now 23, graduated in PPE from Oxford last year. She picked Plato’s The Republic, as her book, and lip balm as her luxury item. As for her moments of joy, she said: “When I’m watching a cricket match between India and Pakistan — and Pakistan wins — I am really, really happy.” Listening to her moving interview, full of life and laughter, some listeners could almost have forgotten what Malala refers to as “the incident” on October 9, 2012 when the Taliban shot her in the head. She spent months at the Queen Elizabeth Hospital in Birmingham. When she regained consciousness, the first thing she requested was for her father to bring her physics books “because I was worried that I might be a bit behind in my revision for my exams in Pakistan”. Maybe it is a blessing in disguise that Malala, who intends to continue to fight for girls’ education, has no memory of the assassination attempt.

In the light of Black Lives Matter, many British institutions have decided now is the time to subject the history of the Empire to ever closer scrutiny. Churchill College, Cambridge, held a second discussion to examine Winston Churchill’s policies towards India, with academics alleging his notions of “white supremacy” were not so different from those of the Nazis. Deeply upset, Churchill’s grandson, Sir Nicholas Soames, responded: “I think Sir Winston’s reputation will withstand, with some ease, this sort of rant. I do think it’s terribly disappointing that views like this are advanced at Churchill College... I’m afraid to say I have nothing but contempt for what these people have said.”

And according to the National Trust, Lord Curzon pursued racist policies as Viceroy of India from 1899 to 1905. The trust, which looks after the Curzon family home, Kedleston Hall in Derbyshire, says: “Like most of his contemporaries, British rule in India was to him a ‘civilising mission’: a euphemistic and racist ideology used to justify colonial supremacy.” Supporters of the Empire will be delighted to learn that Curzon’s statue still remains at the Victoria Memorial Hall which retains its name.

Lord Swraj Paul, who has long been a sort of spokesman for Indo-British relations, turned 90 on Thursday. He was born in Jalandhar on February 18, 1931, moved to Calcutta in the 1950s when he was 24 (“Calcutta was and is a lovely city”), married Aruna Vij in 1956 within a week of meeting her although she was engaged to someone else, and settled in London in 1966. Although he has had both doses of the Pfizer vaccine, Swraj remains in lockdown. “I miss going to work.” Even though Swraj says, “I am 100 per cent Indian and 100 per cent British,” he adds, “On some things you have to choose. So I still get up at 5.30 am, have a cup of tea and am in the office by 8 am. Very Indian.”

Taking part in the debate at Churchill College, Cambridge, the historian, Madhusree Mukerjee, said Sir Winston Churchill was a white supremacist guilty of aggravating the effects of the 1943 Bengal Famine, and also that Hitler “was inspired by the British Empire”. She added: “Hitler’s favourite movie was The Lives of a Bengal Lancer... in which British officers in the North-West Frontier perform these heroic feats. He made it compulsory viewing for SS trainees.”