Advertisement
Home / Opinion / Loyalty out of place: A tale of two governors

Loyalty out of place: A tale of two governors 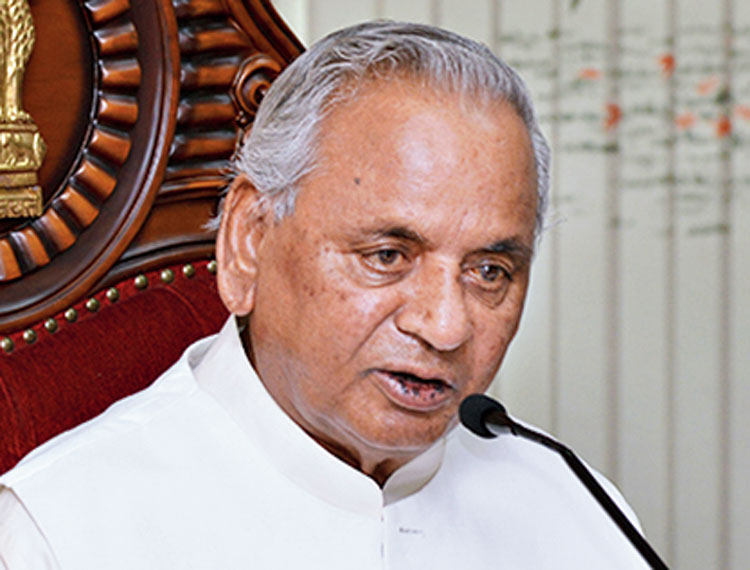 Kalyan Singh’s has been a chequered career
The Telegraph file picture
Gopalkrishna Gandhi   |   Published 21.04.19, 03:00 AM

His Excellency, as a prefix or title for a governor, sounds grand. Its equivalent in Hindi, ‘Mahamahim’ sounds even grander, more larger-than-life. Like ‘His Worship’ for a mayor, ‘His Lordship’ or ‘Her Ladyship’ for a judge, ‘His Grace’ for a bishop, the honorifics for a governor are meant to make him or her appear bigger than the capacity of human biomass. Many governors in India have, in keeping with democracy’s evolving ethos, officially and formally ceased to use those honorifics. So, I believe, has India’s esteemed current Rashtrapati. But their use by others, simple people wanting to take no chances with courtesy or etiquette continues and, as I see it, will continue for quite some time to come — such is the average life expectancy of social nomenclature.

The late Narayan Dutt Tiwari was quite a master of his mother tongue, Hindi. I was wowed, at a gathering in New Delhi, by Narayan Duttji’s improvising a new honorific for the then president of India, Pratibha Patil. Uncomfortable with the incongruity of ‘Mahamahim’ when used for a woman, he addressed her as ‘Mahamahima’. I have an impression India’s first woman president was vaguely irritated by the coinage. But it certainly added, for that fleeting moment, to the aura that surrounds a head of state.

A governor in India, like its president, lives in a house built beyond the geography of standard dwelling needs. He or she is accompanied by accoutrements beyond the geometry of standard support systems. An aura, likewise, floats over that excellent head beyond, well beyond, the geophysics of ‘Health&Glow’. All this, in imperial and colonial times, served a political purpose. Their excellencies were supposed to look larger, seem bigger, appear mightier than when in just their breeches, they waxed their moustaches or parted their thinning hair. Riding in buggies or atop horses they were meant to inspire awe. They did not always succeed. In fact, more often than not, their style did not make up for substance though, occasionally, it did. As in the case of Governors General James Andrew Broun-Ramsay, 1st Marquess of Dalhousie (1848-1856) and that “Most Superior Purzon” — George Nathaniel Curzon (1899-1905). And among the raj’s governors rara avis like Sir Thomas Munro, ‘father of the Ryotwari system’ who endeared himself to the people, especially the peasantry of Madras presidency as their governor (1819-1827).

Politics and political considerations governed London’s appointments to the raj’s manorial offices. Mayo (1869-1872), for instance, was a Disraeli-appointee as governor general, his successor, Northbrook (1872-76), a Gladstone one. Back in office, Disraeli sent Lytton I (1876-1880) to India, only to have Gladstone, prime minister once again, appoint Ripon (1880-1884). Decades later, Churchill sent Wavell as viceroy (1943-1947) to postpone India’s independence as much as he could, while his successor Attlee appointed Mountbatten (1947-1948) to advance it.

Independent India’s governors were, in the vision of its founders, meant to be apolitical. But politics and political association played a role in the appointment of freedom fighters as governors — Sarojini Naidu to the United Provinces, Jairamdas Daulatram to Bihar, Kailas Nath Katju to Orissa and C. Rajagopalachari to West Bengal. These persons were exceptional human beings, statesmanlike and even sagacious. They were true Mahamahima and Mahamahims in style and substance. Their political background as Congress leaders was not irrelevant but it was, once they became governor, beside the point. They saw themselves as heads of state, governors of the provinces, not Congress-appointees. Their ‘Excellency’ aura, despite the change-over from raj to swaraj, did not jar.

Today, in the year of grace’s merest trace, when politics and political considerations not just play a role in their appointments but, in fact, determine them, ‘His Excellency’ as a title works to opposite effect. But that honorific is not the issue. It is the thingness, the quiddity or what a Hindi-stylist like Narayan Dutt Tiwari would call, with the finger pointing to his own tragic example, the ‘antarvastu’ of that honorific, that is the issue. And that is under severe strain. To be sure, there are many governors, appointed in and after 2014 who have done nothing that can be faulted, in terms of propriety or content. Two governors have, in recent weeks, been true, more than true, to their political beliefs — Tathagata Roy, till recently governor of Tripura and now governor of Meghalaya, and Kalyan Singh, governor of Rajasthan. One must grant them the palm for loyalty to their political ideology, their political belief-system.

The governor, Tathagata Roy, the people of his state may not know, and his detractors may not recall, is an engineer, and a former professor of construction engineering. During my term of office as governor of West Bengal, Tathagatababu met me a few times on public issues. In one such conversation, he told me of his métier as an engineer — building bridges. His description fascinated me and I thought to myself, “Here is one who would make an excellent Governor drawn from the professional class, like the irrigation engineer, A.N. Khosla, who made a distinguished Governor of Orissa.”

Given their careers, both governors, Tathagata Roy and Kalyan Singh, have had excellent reasons to make the most excellent of Excellencies. But the fates are jealous, alas.

Kalyan Singh’s has been a chequered career. In October 1997, with the Bahujan Samaj Party withdrawing support, his majority in the House was imperilled. The then prime minister, Inder K. Gujral, recommended to the then president, K.R. Narayanan, that the Kalyan Singh government be dismissed. In terms of political ideology, the president and prime minister were on the same page — socialists of the Nehruvian mould. And with the BSP’s founder-leader, Kanshi Ram, Narayanan had a warm equation. On the other hand, Kalyan Singh, then the chief minister, was dyed-in-the yarn Hindutvavadi. And yet, Narayanan demurred, on purely constitutional grounds. He returned the proposal to Gujral, unapproved. Later events, with the Allahabad High Court coming in, proved Narayanan’s instincts to have been absolutely right.

As governor, Tathagata Roy’s tweets on India’s minority communities and on Kashmiris have been an astonishment. They do little credit to him as a former construction engineer. Likewise, now as governor, Kalyan Singh’s partisan comments on the 2019 election scene ill-suit a quondam chief minister famously ‘saved’ from dismissal by a non-partisan president.

Both being ideologically committed, they are perfectly entitled to their Hindutva ideologies. And they must proclaim them unreservedly, if within the law’s limits, ‘from the roof-tops’. But from atop their gubernatorial office? There, on that perch, inaugurated and adorned in independent India by persons like Sarojini Naidu, they are meant to personify and proclaim a governor’s dharma — safeguarding the Constitution of India.

Tathagata Roy’s tweets having been upbraided by public opinion and Kalyan Singh’s comments on the election objected to by the Election Commission of India, are their consciences troubled? Who would or should know? The keeper of a governors’ conscience.

Governors, Article 156 of the Constitution of India says, “shall hold office during the pleasure of the President”. In terms of our Constitution, where the president acts only on the advice of the prime minister, this means, in effect, “the pleasure of the Prime Minister”. But the Constitution does not prohibit or even inhibit an expression of the president’s displeasure. That is his prerogative and, as many distinguished presidents have shown, a most effective one.

Ram Nath Kovind’s displeasure of such gubernatorial transgression needs to be conveyed but, far more importantly, needs to be known to the nation. Important as it is for the governors concerned to know that they have crossed the line of propriety, it is far more important that the president sets the norm, stresses it, visibly and vocally. If the president, going along the grain of public opinion on Roy’s tweets and the Election Commission’s observations in Kalyan Singh’s matter, makes his displeasure a matter for public record, he will do well by the Constitution, by the people, by the republic.

A president’ word is heard. His voice is heeded.