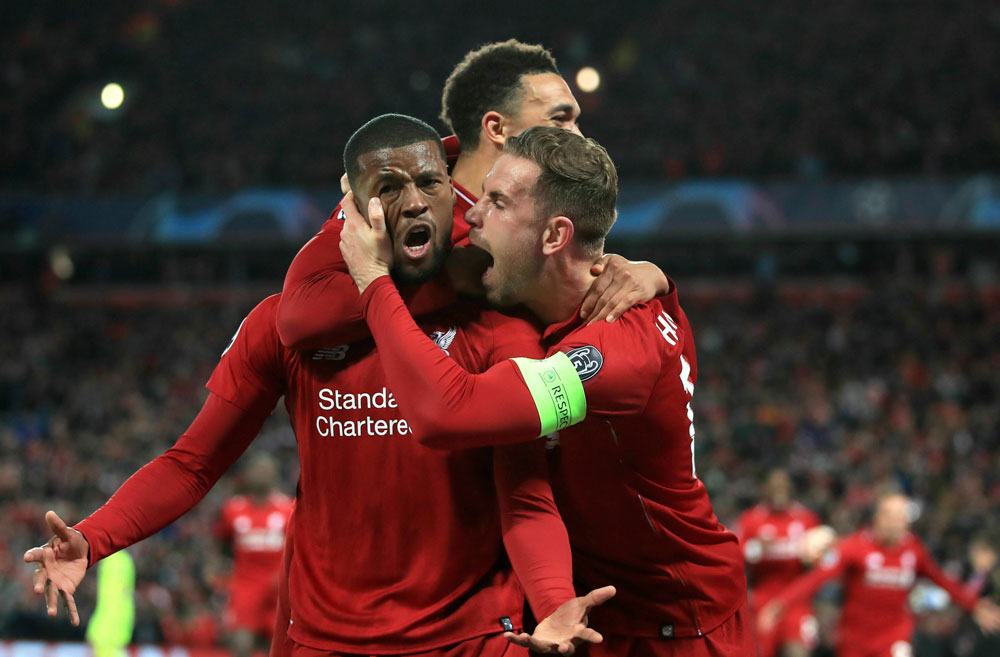 Georginio Wijnaldum, left, celebrates scoring his side's third goal of the game during the Champions League semi-final between Liverpool and Barcelona at Anfield, Liverpool, on Tuesday
Picture by AP
The Telegraph   |   Published 11.05.19, 03:17 AM

Sir — The manner in which Jürgen Klopp’s ‘Red Army’ beat Barcelona at Anfield, thereby coming back strong from a 3-0 first-leg deficit against Lionel Messi’s team, was thrilling (“Don’t know how the boys did it, says overwhelmed Klopp”, May 9). The Liverpool players were in tears after the incredible 4-0 second-leg victory over the Spanish champions. The win has been described as the ‘greatest comeback in Liverpool’s illustrious European history’. It has taken Liverpool to the final of the Champion’s League, where it will play against the Tottenham Hotspur.

Before the match, Klopp told his men that they had a chance to win. His ‘talented giants’ delivered the goods, holding aloft a legacy of passion, grit, determination and an indomitable fighting spirit. The victory was all the more astonishing because Liverpool was playing without the injured Mohamed Salah, Roberto Firmino and Naby Keïta.

Ultimately, the team delivered the greatest in a long line of famous comebacks to reach the final. There may have been more such glorious nights in English football’s history, but this will always stand out from the rest.

Sir — Liverpool’s victory over Barcelona was stupendous. I am not a Liverpool fan, but even I have to admit that Jürgen Klopp’s boys pulled off the impossible at Anfield. More important, it was a decisive match; Liverpool crushed Barcelona. Given how depleted the ‘Red Army’ was, it was hard to believe one’s eyes when Divock Origi scored a goal in the seventh minute, or when Georginio Wijnaldum scored twice in 122 seconds to level the tie at 3-3 in the 56th minute of the game. It remains to be seen what happens in the final, but for now Liverpool deserves the accolades it is getting.

Sir — It was delightful to learn that the Indian dairy giant, Amul, will be the principal sponsor of the Afghanistan cricket team at the World Cup in England. It is a matter of pride for India and for Amul, which is one of Asia’s largest dairy brands. Amul has always been a symbol of empowerment; its association with the fastest growing and extremely promising cricket team is sure to bolster the energy and confidence of the young players.

This development also goes to show India’s bond with the Afghans. The great Afghan, Khan Abdul Ghaffar Khan, called Frontier Gandhi, is also known to have visited an Amul facility in 1969.

Sir — Stray dogs are increasingly being referred to as a ‘menace’ in English newspapers and by other forms of media. But if they are a menace, then what are human beings, who are single-handedly responsible for all kinds of large-scale destruction?

While they talk about sterilization and complain about the number of dogs on the streets increasing, what about the fact that they seem to think nothing of the human population of the country increasing? India is a country of 1.35 billion people; should we really be having more children and burdening the nation’s resources? Human beings have no right to refer to dogs as a ‘menace’. When dogs are sterilized, what happens to them after? Are they safely dropped back to place they were picked up from? That is, after all, what is mandated by the law.

While sterilization of stray dogs is important, proposals should also have been made to the authorities to make arrangements for the better treatment of the countless dogs who sustain grievous injuries after being hit by vehicles, as well as those that die of serious skin diseases and other ailments on the streets.

Incidents involving ‘mad’ dogs that injure people cannot be held up as convenient excuses to vilify all stray dogs. What do the authorities do about human beings who roam around on the streets harassing passers-by? The country’s human population is growing at an alarming rate every day. As such, who is the real menace?