Preventive measures should be adopted immediately 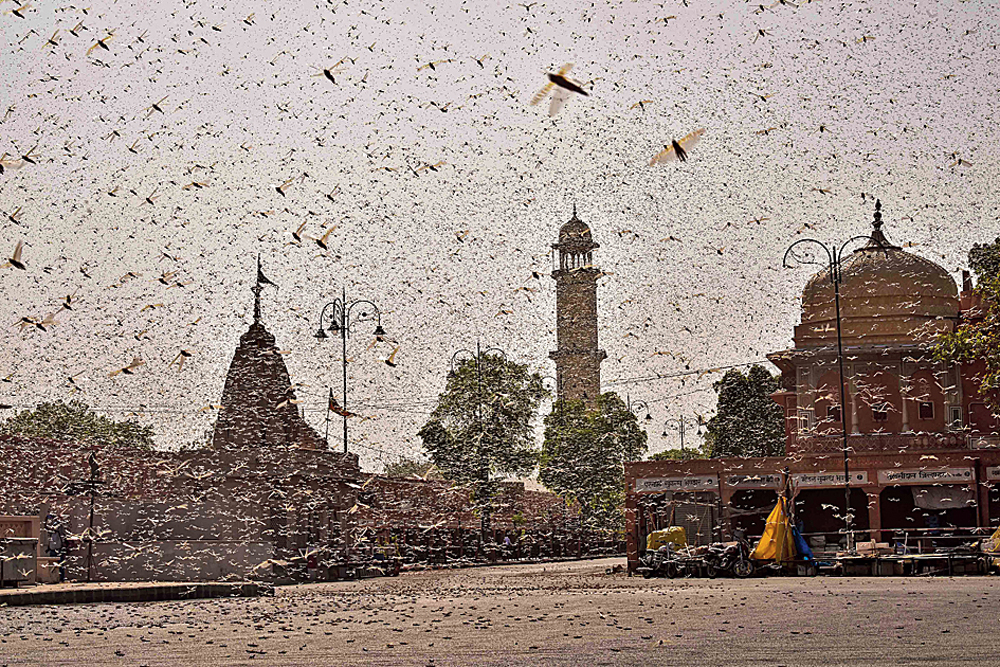 Sir — Following pestilence and floods — parts of Bengal and Assam have been submerged since Cyclone Amphan struck — infestation has now arrived in India to exacerbate the apocalyptic conditions. A swarm of locusts has been reported in Rajasthan, threatening crop damage in the entire country. Preventive measures should be adopted immediately. Given the strain on the agricultural sector owing to Covid-19, and the devastation of food crops in the eastern states by Amphan, swift action is necessary to avoid a disaster that could be the final nail in the country’s coffin.

Sir — As Shiv Visvanathan writes vividly in his article, “Speaking memory” (May 21), the gas leak at the L.G. Polymers plant in Visakhapatnam does revive the memories of the Bhopal gas leak tragedy of 1984. The misery unleashed upon and grave injustice meted out to the victims still rankle.

The Bhopal incident has almost sunk into oblivion. Even the verdict issued 25 years after the tragedy did not come as a balm to those who have lost everything to it. No authentic records of the exact number of people killed or injured owing to criminal negligence on the night of December 2-3, 1984 are known to exist. But that the incident is among the world’s worst industrial accidents is evident from the vast number of people suffering from deformities on its account for generations.

Besides the inordinate delay in judgment — 25 years is undoubtedly a very long time — what reflects the gross miscarriage of justice is that legal proceedings against the main culprit, Warren Anderson, the then chairman of Union Carbide Corporation, could not take their due course, perhaps for fear of pressure from the United States of America, which eventually harboured him. The victims, mainly have-nots, were thus deprived of a fair hearing. They had to continue to claim proper rehabilitation.

The state and Central governments, and the politicians involved in the case, let Anderson leave India at the cost of tears of the underprivileged. R.K. Dhawan, then private secretary to Rajiv Gandhi, was reported to have said that Arjun Singh, the Congress leader, was only the person who knew how Anderson fled the country. When the judicial system ends up turning a blind eye to sufferers and letting culprits go unpunished, one wonders what and who the law is for.

Anybody who harbours criminals is as guilty as the criminal himself. The US, thus, cannot shrug off accountability in the matter. There also seems to have been an organized process to abet US hegemony and protect Anderson at the cost of the nation’s interests. There were allegations that money meant for providing relief to the victims was being siphoned off. At least this mystery needs to be resolved.

Sir — Shiv Visvanathan, in his erudite way, rightly brings to life memories of the Bhopal gas tragedy, criticizing governments of all hues that have been in power in India for their apathetic attitude towards civil society. Among the people he mentioned for providing yeoman service during these times of trouble, one would like to add the name of Sujit K. Das, who is known to have founded the ‘No More Bhopal Committee’. He, along with Anil Sadgopal, was also a member of the committee appointed by the Supreme Court to report on the effects of the gas tragedy on people. Das’s contributions should be lauded.

Sir — The article, “Speaking memory”, was both heartbreaking and shame-inducing. It criticizes an insensitive administrative system as well as holds up a mirror to the readers for forgetting the plight of the survivors of great man-made disasters until the next one strikes. It is infuriating that the condition of the working class — especially the poorer sections — has remained unchanged over the decades. Unsuspecting labourers still suffer from employers’ apathy, farmers still starve while putting food on our plates, manual scavengers still die cleaning our sewers, migrant workers still die without relief measures. All of this goes to show one thing — no political leader can be trusted to make a difference to the lives of the needy. Civil society needs to stand up as one to claim rights for the ones whose voices fall on the administrations’ deaf ears.

Sir — The idea of a clean and green India could be achieved only by conducting proper eco-audits of all states as done under the existing ‘Swachh Survekshan’ programme. The Centre should take steps to recognize and reward states based on their performance in these audits. India could adopt a system of awarding credits to schoolchildren for planting saplings as part of their academic curriculum. This will help nurture eco-sensitivity in the next generation by promoting the concept of sustainable growth. Such multi-pronged initiatives are the need of the hour.