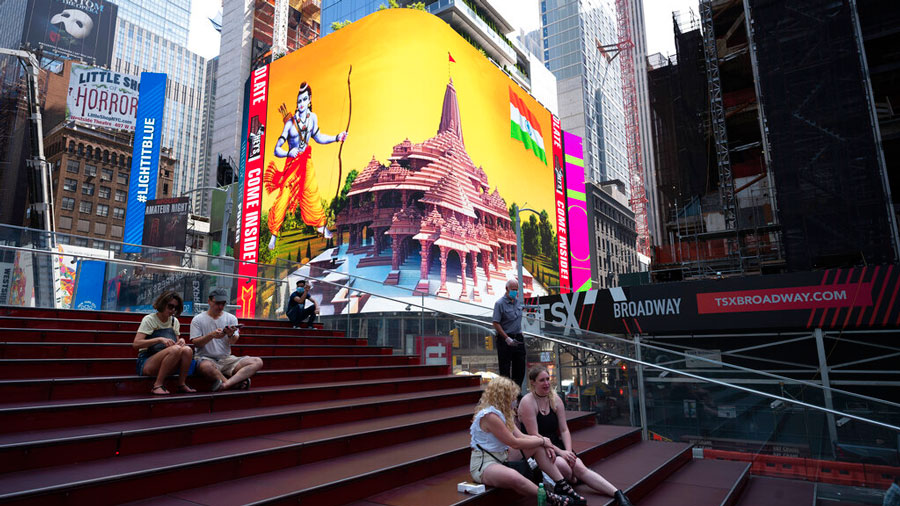 Sir — It is deeply disheartening that a 3D portrait of a model of the Ram temple slated to be built in Ayodhya was beamed in New York’s iconic Times Square on the day of the bhoomi pujan. It is bad enough that such blatant signs of majoritarianism and the spread of regressive Hindutva ideals are being celebrated on our own soil; it is worse that the same is being shamelessly propagated overseas, in a city known for its diversity and cosmopolitanism. One wonders whether citizens of the United States of America — of Indian origin or otherwise — know about or remember the demolition of the Babri Masjid, and the plight of minority communities in India ever since.

Sir — It has been reported that Facebook will now be allowing its employees to work from home till July next year, on account of the Covid-19 pandemic and the risks it poses to people if they gather in office spaces. This steadily seems to be becoming the new normal; earlier, the multinational giant, Google, had also announced that its employees would be working from home till July 2021.

From this growing stream of decisions, it is evident that even big corporations are acknowledging that the coronavirus outbreak is set to last for a while. The next step now is to ensure that employees who are working from home are given the assistance they require to prevent their mental health from deteriorating. Working from home often lacks the sense of structure and balance that working in an office space affords; essentially, the home becomes one’s place of work, and the boundary between the professional space and the personal one gets blurred. While it is praiseworthy that companies are giving some thought to their employees’ safety by allowing them to work from home, have they considered devising ways to make the experience a healthy one?

Sir — After Google, Facebook, too, has announced that its employees will be working from their homes till the middle of next year. It has also announced that each employee will be given $1,000 for their home office needs. This is an admirable move; while there is no doubt that working from home protects people from having to make the work commute and coming into contact with others, it also means that the allied costs of working for a company which were, till now, covered by their workplaces, would have to be borne by the employees themselves. As such, if work-from-home is to be the model that is followed by big corporations for the foreseeable future, they must ensure that their employees are equipped to thrive in this new environment instead of feeling bogged down by it.

Sir — As the coronavirus threat seems set to stay for a while, it was the right decision on the part of Facebook and, earlier, Google, to allow their employees to work from home till July next year. One hopes that by then, the rapid spread of the disease will have dissipated, as many people are finding it difficult to cope with the work-from-home structure and are eager to get back to their familiar office spaces. Working with colleagues in a common space holds out hope of professional growth, team spirit building and camaraderie that isolated working does not. Hopefully we can eventually all go back to working normally.

Sir — Like millions of other Indians, milk farmers are also suffering greatly on account of the coronavirus pandemic. After shops were shut down, the demand for milk became low. The government will have to take the necessary steps to support dairy farmers by incentivizing co-operatives to export more skimmed milk powder, the supply for which has exceeded the demand. Perhaps the ‘Anand’ model of dairy development in India, pioneered by Verghese Kurien and replicated all over the country, needs to be rejuvenated in all pockets so that milk farmers do not have to go without incomes and are able to sustain themselves again in these trying times.