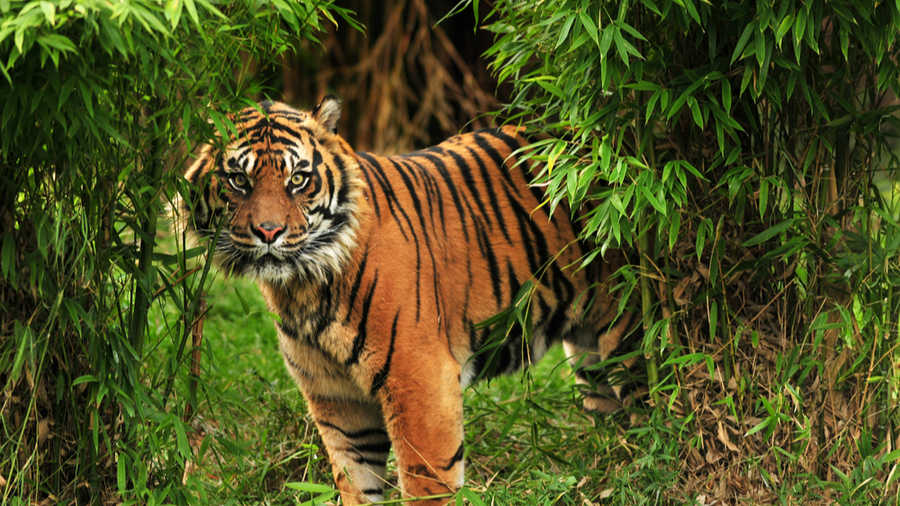 Today is celebrated as Global Tiger Day across countries, in order to raise awareness about the need to conserve tigers and protect their natural habitats.
Shutterstock
The Telegraph   |     |   Published 29.07.20, 01:47 AM

Sir — Today is celebrated as Global Tiger Day across countries, in order to raise awareness about the need to conserve tigers and protect their natural habitats. Since the 1970s, steps have been taken in India to protect tigers. In 2018, there was a marked increase in its numbers, making India home to 75 per cent of the world’s tiger population. But this cannot make the authorities complacent. Only around 3,900 tigers worldwide are still in the wild, as the big cats are under constant threat from activities such as poaching and deforestation. Offences committed against tigers must be punished strictly.

Sir — The journalist, Vikram Joshi, was shot for allegedly having reported the sexual harassment of his niece to the police (“Journalist shot on street in UP ‘gundaraj’”, July 23). Joshi, who worked for a local newspaper, had filed the complaint on July 16. But the family claims that instead of taking action against the accused, the police provoked the goons to seek vengeance against Joshi.

Nine persons have been arrested in the case so far. However, some people are now trying to add communal colour to the incident. But this murder and the apathy of the state government towards such crimes has once again proved that chief minister, Yogi Adityanath, believes only in ‘encounter raj’ and ‘jungle raj’. This is yet another instance of the casually misogynistic attitude of the police and the government’s patronage of a trigger-happy force, groomed to look the other way as far as law and order is concerned.

Sir — The fact that a journalist was shot on a Ghaziabad street only because he had lodged a complaint against alleged molesters is distressing. Coming on the heels of the Kanpur shootout led by the gangster, Vikas Dubey, this incident raises serious doubts on the government’s commitment to the idea of “Ram rajya” — a phrase used frequently before the 2017 elections to promise good governance in the state. Will the decision of the government to provide a job to the wife of the deceased and to bear the cost of education of his two daughters solve the persistent problem of lawlessness in the state? Unless the government stops patronizing goons, the rate of crime will keep increasing.

Sir — The murder of Vikram Joshi is not a one-off incident. In Uttar Pradesh, it is common for people to be attacked by goons after filing cases of assault on women. Joshi’s killing reminds one of the Unnao case of 2017, where the family of the rape survivor was continuously harassed after a complaint had been lodged. The father of the girl was killed in police custody under suspicious circumstances, while the girl was herself hit by an unidentified truck — an ‘accident’ in which her lawyer and she were injured but two of her relatives died. The culprit was convicted in 2019. That year, in the same district, another woman who had accused some people of rape, was set ablaze by the alleged attackers on her way to court.

The National Crime Records Bureau noted a spike in the crime rate in Uttar Pradesh between 2016 and 2018. In view of that, the recent instances of criminal activity raise questions about the law and order situation in the state as well as the government’s intent to improve the situation.

Sir — One wonders if the government of Uttar Pradesh will ever take law and order seriously. While Vikram Joshi was shot right in front of his two minor daughters, allegedly for fighting for the safety of his niece, a few days earlier, a woman and her daughter set themselves on fire outside the chief minister’s office in Lucknow, demanding action against men who threatened the family and molested the daughter.

It is also disturbing to note the callousness of people in general. According to reports, footage from CCTV cameras shows people and cars passing by as the journalist lay on the street, with his elder daughter by his side. How long will people endure such lawlessness and stay quiet? Citizens must raise their voice in protest.

Sir — The murderers of Vikram Joshi should not go unpunished. The state government should set a precedent to show citizens that all hope is not lost yet. It is unfortunate that people who protest against injustices should have to die in such a gruesome manner.

Sir — It is clear that criminals in Uttar Pradesh know they can get away with anything. In a place where the police do not follow the law — encounter killings are just one instance of such lawlessness — criminals cannot be expected to toe the legal line.