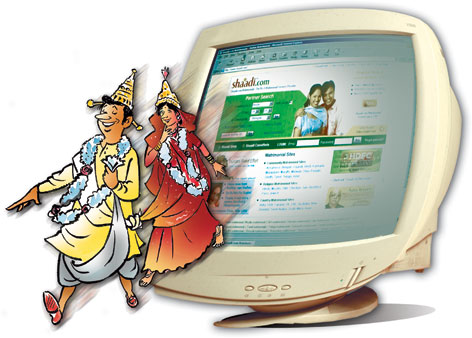 According to news reports, Shaadi.com, a leading matrimonial website in India has removed its skin colour filter after facing backlash from users.
Illustration by Debashish Deb
The Telegraph   |   Published 28.06.20, 01:33 AM

Sir — One down, several more to go. According to news reports, Shaadi.com, a leading matrimonial website in India has removed its skin colour filter after facing backlash from users. There are too many objectionable filters on matrimonial websites to list — religion, caste, height, weight are just some instances of the categories that people can restrict their searches to. Whatever happened to marriage being a melding of true minds? What if applying a religious filter puts together a liberal and a fanatic because on paper they share a religion? Will they be able to be happy together?

Pushed to the brink

Sir — The United Nations has said that Yemen will “fall of the cliff” unless it can urgently arrange for funds for the war-torn country. Millions of children will go hungry and without vaccinations, the agency said, adding that almost 10 million children are without proper access to water and sanitation, as well as 7.8 million children without access to education, following school closures. At this crucial juncture one should recall the petulant move by the president of the United States of America to stop funding the World Health Organization because of his tiff with China. The US is WHO’s top funder and contributes around $450 million to the organization. At a time when countries across the world are doing their bit in spite of financial difficulties, the actions of the US president are even more glaringly petty.

Add to this the fact that the US backs one of the Saudi warring factions in Yemen which tried to bring back to power the deposed president, Abd-Rabbu Mansour Hadi. The policies of the US have aggravated Yemen’s suffering for years — be it through the sale of billions of dollars in munitions to Saudi Arabia and other countries that have intervened in the civil war in Yemen or by providing cover for Saudi Arabia in the UN security council, which passed a resolution in April 2015 that demanded an end to Yemeni violence but made no mention of the Saudi-led intervention. The burden of responsibility to help Yemen overcome this crisis lies squarely on the shoulders of the so-called leader of the free world.

Sir — The US has cut millions in healthcare aid to Houthi-controlled areas in Yemen, blaming the rebels for diverting food and medical supplies. Given the raging pandemic, it could not have chosen a worse moment to do so. What is worse is the decision of the Donald Trump administration to halt payments to WHO, which was readying hospitals in Yemen — battered by years of civil war — to deal with the onslaught of the coronavirus. Civilians will have to bear the brunt of a political crossfire that they did nothing to cause. The figures of starvation, malnutrition and destruction recently released by the UN are shocking as well as a telling indictment of interventionist foreign policies. Unless the world steps up and takes responsibility, Yemen will soon be wiped off the map.

Sir — Mark Zuckerberg may finally face the music for his careless actions. After Unilever announced that it would join the boycott of Facebook by civil rights groups, big names like Coca-Cola, Hershey and Honda, too, have decided to stop advertising on the social media platform for the time being. More than 100 companies are now part of the growing list of businesses to take a stand against Facebook. This is heartening. The only way for social media giants to be made accountable is to hit them where it hurts: the business bottom line. Print and traditional media have to follow rules and regulations — although these are increasingly being flouted — that are not applicable to social media. So far, neither huge fines — like those imposed by the European Union on tech giants like Google and Facebook — nor government hearings — like the one Zuckerberg had to face in the United States of America — have succeeded in reining in the errant behaviour of Facebook and its founder. More companies should come forward to increase the pressure on Zuckerberg.