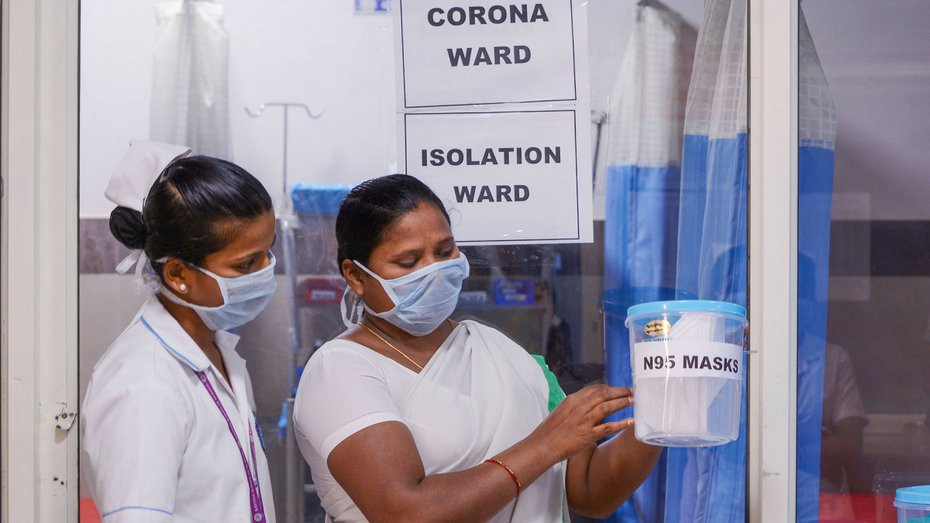 This year, International Nurses Day — it was observed on May 12 — was of special significance on account of the brave and relentless battle that nurses, as part of the medical fraternity, have waged against Covid-19.
File picture
The Telegraph   |   Published 14.05.20, 11:19 PM

Sir — This year, International Nurses Day — it was observed on May 12 — was of special significance on account of the brave and relentless battle that nurses, as part of the medical fraternity, have waged against Covid-19. Yet the condition of nurses in the country hardly looks promising. A recent report by the World Health Organization revealed that India is set to face the biggest shortage of nurses in the world, after Bangladesh, amid the ongoing crisis. This is only going to add to the pressure that they already bear. The least that can be done in this situation is to provide them with better training programmes and more respect.

Sir — In his 33-minute address to the nation, the prime minister, Narendra Modi, was long on lofty goals and short on details. The stimulus package worth Rs 20 lakh crore that he announced well into his speech sounds like a huge amount — not only does it have a big number of zeroes but it also corresponds to 10 per cent of the country’s gross domestic product. But a closer look reveals that a large portion of it — as much as Rs 8.04 lakh crore — is part of the additional liquidity injected into the system by the Reserve Bank of India through various measures over three months. This is besides the financial package of Rs 1.7 lakh crore announced by the finance minister, Nirmala Sitharaman, on March 26.

To the mathematician, the declared amount may be 10 per cent of GDP, but in reality only about 5 per cent remains to be injected. The concerns of the common citizen, however, are barely related to the figures. On the same day, a 21-year-old migrant worker was reported to have collapsed and died in Telangana after walking 300 kilometres on his way to Odisha. So when the prime minister said that “some important decisions will be announced in the economic package for every section”, people naturally expected some atmanirbhar relief packages for the poor and the salaried middle class. Will the measures for migrant workers announced yesterday actually work to their benefit? The main emphasis of Modi’s speech seemed to be the Make in India project, his pet scheme which has been a non-starter from the beginning. The prime minister would have done well to clarify the details of this new scheme himself rather than making the people of the country wait for the finance minister’s speech.

Sir — The prime minister once again addressed the nation in his characteristic style. With every word, it seemed as if he were delivering a historic speech. But the average Indian knows well that his speech has nothing but rhetoric. Every now and then, Modi spoke about a self-reliant India. But one still does not know for certain how that can be achieved.

An economic package of Rs 20 lakh crore sounds robust. However, it has been revealed that more than Rs 68,607 crores have recently been written off for loan defaulters including Nirav Modi, Vijay Mallya and Mehul Choksi. It is unfortunate, especially in the light of this, that even at the end of the third phase of the lockdown, the prime minister could not chalk out a proper plan. The people of India will not forget the migrant workers who walked along the railway tracks and were crushed to death by a moving train in their sleep, all because of the lack of planning and preparedness on the part of the Central government. Nirmala Sitharaman announced relief measures for migrant workers yesterday; now the million-dollar question is how the declared amount will be spent. The government will have to answer not only to the countrymen but also to the world.

Sir — In his recent address to the nation, the prime minister asked Indians to be ‘vocal for the local’ by embracing local goods. This would provide support to the country during an emergency situation like the Covid-19 pandemic, when the global supply chain has broken down. However, this reminds one of the condition of India before the reforms of 1991, when the market was driven primarily by local production. At the time, the economy was growing at the ‘Hindu rate of growth’ of only 3.5 per cent on average.

The over-reliance of Indians on foreign goods is widening the nation’s trade deficit with countries like China, South Korea, Australia and most of the Asean nations. Although India cannot stop its contribution to the global market and shut its gates to international traders, one must admit that the nation today lacks some of the passion for swadeshi that the countrymen at the time of the freedom movement nurtured so strongly. In this context, India’s refusal to join the Regional Comprehensive Economic Partnership was of particular significance. Even if every foreign product does not have an Indian substitute, we should try to look for Indian alternatives as much as possible.

Sir — For the number of times the prime minister mentioned the word, ‘atmanirbharta’, and emphasized the need to support local industries in his latest speech, one wishes that Narendra Modi walked the talk as well. A stylist revealed as recently as last year that he is still fond of Movado watches and Bvlgari glasses. Modi’s supporters praise him for his earnestness. Perhaps switching to khadi and a simple lifestyle like M.K. Gandhi would help his cause more.