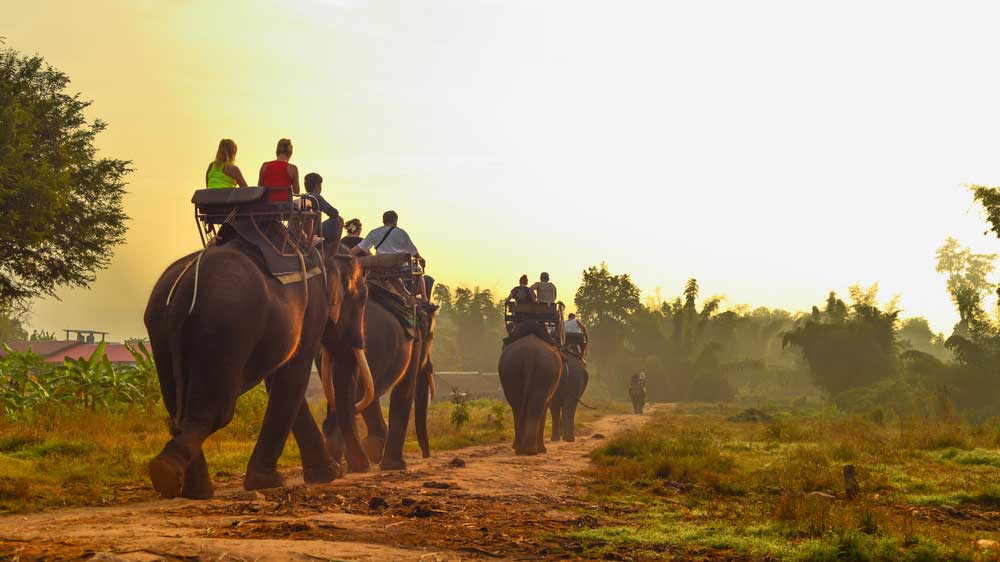 A report revealed that India is home to the second highest number of elephants used for tourism.
Shutterstock
The Telegraph   |   Published 14.08.20, 03:48 AM

Sir — Many people wonder about the need for so many commemorative days — World Earth Day or Global Tiger Day, for instance — all through the year. However, going by the report by World Animal Protection on World Elephant Day — it was observed recently — they seem not just necessary but also inadequate. The report revealed that India is home to the second highest number of elephants used for tourism. Further, they are kept in dismal conditions at entertainment venues, with over 500 elephants being housed at only 21 venues. It is thus important to raise awareness about mankind’s exploitation of the natural world only for its greed.

Sir — The recent incident in Chennai where an officer of the Central Industrial Security Force reportedly taunted the Dravida Munnetra Kazhagam leader, Kanimozhi, at the airport by asking the parliamentarian if she was an Indian just because she said she did not know Hindi cannot be casually brushed aside as an unfortunate incident (“Kanimozhi question on Hindi”, Aug 10). It is clear that the question was meant to be sardonic and born out of arrogance.

Sir — Reading Kanimozhi’s tweet about the incident at the airport was not quite surprising. Students from the southern states of India are often subjected to humiliation for not speaking in Hindi in college and university campuses in North India. But the insult to the parliamentarian was striking because it happened in Chennai, where most people are expected to speak Tamil.

Whatever may be the actual reason for the CISF officer refusing to communicate in a language that native air passengers could understand, to take upon oneself the authority to pronounce what language an Indian should speak was entirely uncalled for. The present political situation at the Centre gives a free rein to people like the CISF officer, who go about flaunting their prejudice and bigotry, caring little about how such behaviour alienates speakers of other Indian languages.

Sir — Soon after Kanimozhi posted the tweet about being harassed at the Chennai airport for not being able to communicate in Hindi, P. Chidambaram and H.D. Kumaraswamy, too, spoke up about the hurdles faced by non-Hindi speakers in India. This makes it clear that Hindi imposition has been a persistent problem.

Unlike what many Hindi speakers might believe, Hindi is neither the “national language” nor the mother tongue of the majority. Even if it were so, it could not have been an excuse for bullying people who speak other languages. Perhaps the only way to fight Hindi imposition in the country is for non-Hindi speakers to learn their mother tongues better, and be more vocal against such bigotry.

Sir — It is shocking that the incident involving Kanimozhi occurred at the Chennai airport. If such a blatant exhibition of language chauvinism can happen in Tamil Nadu, that too with a member of parliament, one can only imagine the plight of non-Hindi speaking persons in the Hindi heartland.

This incident has brought to the fore the blatant attempts of Hindi imposition in states like Tamil Nadu. Should it not be mandatory for people who are posted at airports to learn the local language? The high-handedness of the security officer is one example why Tamil Nadu had needed anti-Hindi agitations in the past. It is time for all political parties, irrespective of their affiliations, to come together and take concrete steps to stop the imposition of Hindi in the state.

Sir — The prime minister, Narendra Modi, has officially launched the agriculture infrastructure fund worth one lakh crore rupees (“Farm fund with a riddle”, Aug 10). While it is true that farmers across the country are suffering from the lack of infrastructure, such as warehouses, cold storage chains and all-weather road connectivity, this scheme is unlikely to meet their needs. First, the funds will be disbursed as loans. This is not the same as giving out money. Further, all facilities will be provided via farmer groups or corporate players, not directly to farmers. Is there any guarantee that the benefit will reach the underprivileged farmers, who need such help the most?

The farm crisis in India is critical — a number of farmers commit suicide every year owing to their inability to pay back loans. Instead of resolving this problem, the government has delivered a new eyewash. The need of the hour is to let farmers have a greater say in determining the price of their produce or to transfer cash directly to their bank accounts.