No end in sight: Hathras violence 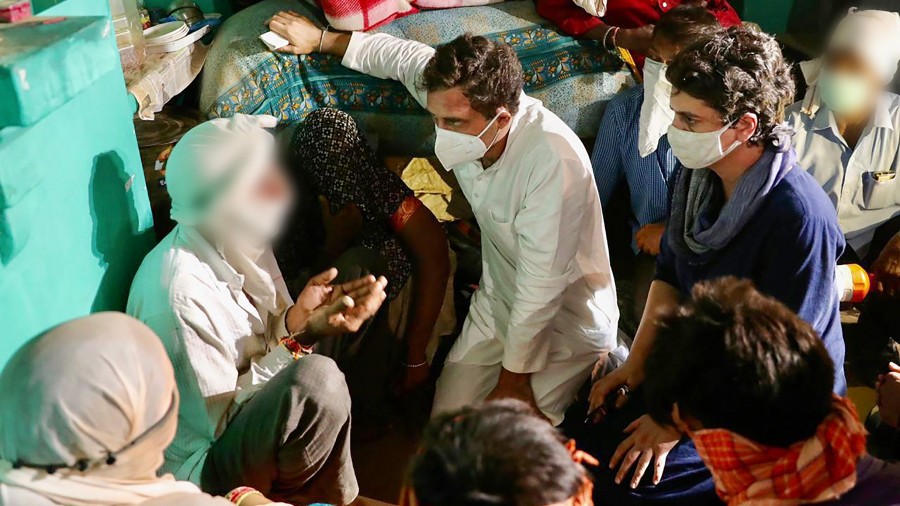 Priyanka Gandhi Vadra and Rahul Gandhi meet the family members of the Dalit woman who died after being allegedly raped at Bulgadi village in Hathras.
PTI
The Telegraph   |   Published 06.10.20, 02:22 AM

Sir — The death of a Dalit woman who was attacked and gang raped in Hathras, Uttar Pradesh, has once again brought to light the perils faced by women in India, especially those who belong to vulnerable communities (“Paralysed rape victim dies,” Sept 30). The woman was so brutally assaulted that she was paralyzed waist down owing to injuries to her spinal cord. The perpetrators of the crime were four upper-caste Thakur men. One of the perpetrators already had a history of violence with the woman’s family. To make matters worse, not only did certain sections of the administration dismiss it as “fake news” but also allegedly directed the police to cremate the body in the dead of the night while the family was intimidated and locked up.

The incident in Hathras is undoubtedly one of caste violence. The question that has been raised since then is whether the accused will be punished appropriately or walk free owing to their caste privileges. The role of caste in violence against women has now become even more prominent. The poem, “Rape Nation”, by the acclaimed writer, Meena Kandasamy, written in response to the brutality in Hathras, including the actions of the police, shed further light on the plight of Dalit women in an increasingly hostile country. According to data by the National Crime Records Bureau, Uttar Pradesh accounts for 14.7 per cent of all crimes against women. Under the Yogi Adityanath government, the state has witnessed a 27.9 per cent rise in crimes against the Dalit community.

In Hathras, as in many other cases of horrific crimes that have been regularly reported from UP, there is little hope that the establishment will work to ensure justice. Civil society must play its role now and ensure that there is a proper investigation. It will be a long struggle before justice can be achieved.

Sir — The gruesome incident at Hathras that led to the death of the Dalit girl has sparked outrage across the country. The gathering at Jantar Mantar, demanding justice for the girl, was one of the largest protests against violence on women since the 2012 gang rape and murder of a young woman.

The presence of the chief minister of Delhi, Arvind Kejriwal, the Bhim Army chief, Chandrashekhar Azad, and the Left leaders, Sitaram Yechury and Prakash Karat, proved that political parties, in spite of their ideological differences, can join hands in moments of crisis. The protesters were rightly appalled at the way in which the UP government had cremated the victim’s body in the dead of night, denying her family the chance to perform the final rites. They have also demanded the resignation of the UP chief minister, Yogi Adityanath, reportedly alleging that the Bharatiya Janata Party administration is shielding the accused. However, four of the individuals involved in the crime have been arrested. Considering that, perhaps it is premature to accuse the state government of abetting criminals.

Sir — As an ordinary citizen of India, I am outraged at the utter cruelty faced by women in this country. Politicians from across party lines have come out in support of the young girl who was raped and murdered in Hathras and her grieving family. It is the need of the hour that all political parties come together to find effective ways of battling this menace.

While many people over the last few years have called for violent measures to be taken against perpetrators, including capital punishment and castration, the fact remains that no matter the intensity of the punishment, nothing will change unless we strike patriarchy and casteism at their root. In fact, contrary to popular belief, stricter punishment, rather than reducing crimes, can have the opposite effect.

Punishment must be meted out to the guilty, but it is essential that we think of ways that will bring about long-term change. It is time that our policymakers devised a solid plan of action.

Sir — The gang rape and murder of a 19-year-old Dalit woman has maligned the image of the Yogi Adityanath government beyond repair. The administration failed to take immediate action against the perpetrators and reportedly prevented the family from performing the last rites. This speaks volumes about the intentions of the incumbent government.

Crimes against women, minorities and Dalits have increased alarmingly over the last few years. It is a clear sign that the government is failing in its basic duty of providing safety to all citizens. Hopefully the probe by the Central Bureau of Investigation will succeed in bringing justice to the woman’s family.

Sir — The carnival in Rio de Janeiro has been cancelled for the first time in a century as global Covid-19 deaths cross one million. Brazil, which has the second-worst death toll worldwide with 1,39,000, and the third-most cases, with 4.6 million, has taken the right decision to cancel the parade. Reports indicate that Kerala, after celebrating Onam,  witnessed a surge in cases. With Durga Puja around the corner, it can be safely assumed that Bengal, too, will see an increase in infections. At least for this year, state governments must prioritize public health and cancel all such events that would lead to large gatherings.