Timely decision: No Chhath Puja at Rabindra and Subhas Sarobar 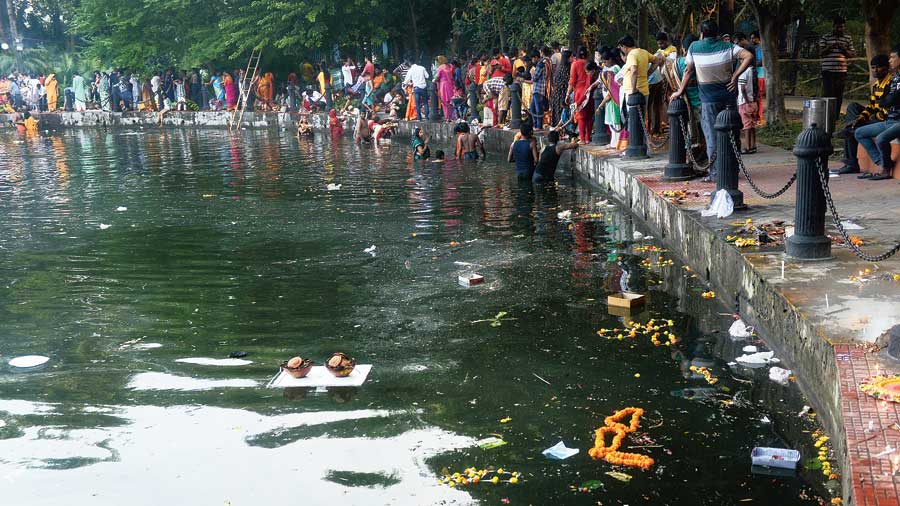 Sir — The decision by the Supreme Court last Thursday to uphold the directives by the Calcutta High Court and the National Green Tribunal banning Chhath Puja rituals in Rabindra Sarobar and Subhas Sarobar must be lauded (“Sacred and profane”, Nov 21). Rabindra Sarobar, known as ‘lake’ to the locals, is home to three species of turtles, common toads, bullfrogs, cricket frogs, squirrels and several species of butterflies, dragonflies and snakes, among others.

Every year after the festivities, the water bodies at Rabindra Sarobar are extremely polluted, causing immeasurable harm to the environment. The NGT’s order was grossly violated in 2018 and 2019 when scores of devotees broke the gates of Rabindra Sarobar to perform Chhath Puja rituals with loud music and firecrackers. In those instances, the government had looked the other way. The petition of the Calcutta Metropolitan Development Authority and the Calcutta Municipal Corporation urging the apex court to interfere with the directions of the Calcutta High Court and the NGT proves that the authorities continue to opt for populist tactics to appease the people to the detriment of the environment. It is time that the administration sets its priorities right.

Sir — Perhaps the best way to arrest pollution would be to reform festive rituals, especially those that lead to the desecration of natural resources. The Supreme Court has rightly upheld the Calcutta High Court’s ban on Chhath Puja rituals at Rabindra Sarobar and Subhas Sarobar. The appeal by the CMDA and the CMC to the Supreme Court to review the high court and the NGT’s directives, however, reeks of populism. It is unfortunate that the lackadaisical attitude of the administration in protecting the environment has forced the courts to intervene in such matters.

While it is the responsibility of the government to protect the environment, nothing can change without a conscious effort on the part of the people. It is necessary to update traditions in keeping with the needs of the time. Rituals and customs, while important, must not become a cause for environmental degradation. Hopefully people will soon see the merit in this decision and find alternative ways of celebrating the festival.

Sir — We live in strange times. As a custodian of the Rabindra Sarobar, the CMDA is expected to protect the water body. Instead, to everyone’s surprise, the CMDA along with the CMC had questioned the directives by the Calcutta High Court and the NGT to ban Chhath Puja festivities at the site. Last year, too, in spite of a court ban, devotees had thronged to the lake and conducted puja rituals, all with the passive support of administrative bodies. The water bodies remained polluted for months.

This year, the West Bengal government had sought permission from the NGT to facilitate Chhath Puja at the eco-sensitive Rabindra Sarobar. To its consternation, the NGT had turned down the plea. It is a relief that the Supreme Court upheld the directives of the NGT and the Calcutta High Court. The government’s lack of commitment towards environmental issues is alarming. It is time the government introspects on its actions.

Sir — As the Supreme Court upheld the ban on Chhath Puja festivities at Rabindra Sarobar and Subhas Sarobar, last Friday many people gathered at the lake to protest against the decision for nearly four hours. However, the deployment of police personnel and setting up of barricades in anticipation of the violation of court orders prevented the situation from getting out of hand. It seems that the administration in spite of its reservations had upheld the direction of the courts to the best of its abilities.

Apart from environmental concerns, the celebration of Chhath Puja at Rabindra Sarobar this year would have posed immense health risks to the public. It is surprising that in spite of the threat posed by Covid-19, people are still keen to gather in large numbers. The celebration of Onam in Kerala and Durga Puja in Bengal had led to a huge spike in Covid-19 infections in both states. It is high time that we learn from these instances and refrain from gathering in large groups. The public has been warned time and again to celebrate all festive occasions at home or in intimate gatherings. The protest gathering at the lake is a glaring example of the kind of behaviour that must be avoided at all costs. It is time we pay heed to the warning of medical professionals and ensure that public health is prioritized over religion.

Sir — The pandemic has brought to a halt the musical evenings synonymous with the festive season in Calcutta. This has led to the loss of livelihood for hundreds of musicians who are now struggling to get by. With no means of income, many have been forced to sell their prized instruments to sustain themselves. Live performances with curtailed audiences have resumed recently but they are few and far between. It is likely to be months, if not years, before the situation goes back to that of the pre-Covid days. Till then it will be a battle for survival.