Readers' Speak: Supreme Court to revisit Section 124-A of the Indian Penal Code; lack of oxygen in India 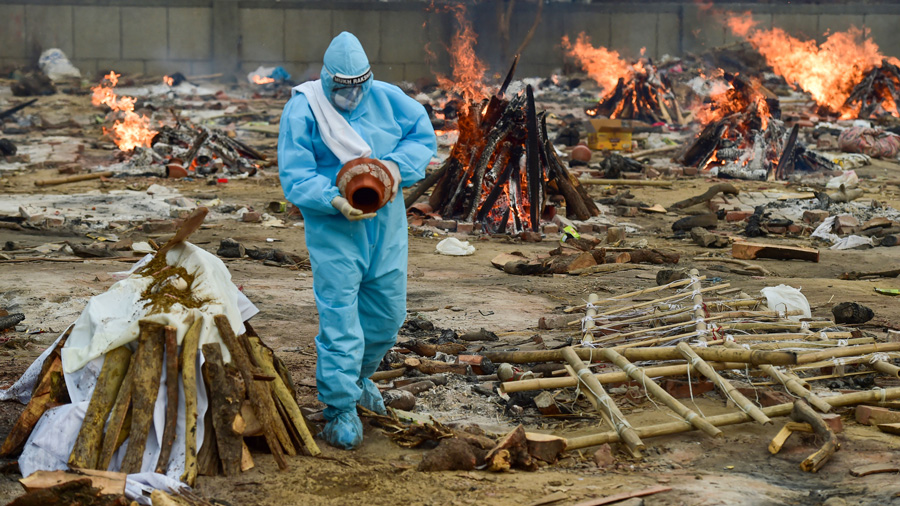 Sir — As the deadly second wave of the coronavirus that is currently devastating the country leaves a long trail of dead bodies, leading to depleting space and wood for burials or lighting pyres, traditional modes of laying the departed to rest need to be reconsidered. Last rites are not just sacred, they are also deeply sentimental issues for people of all religions and bring solace and closure to grieving families. Religious reasons are why few opt for the electric and gas crematoria, although these have been around for many years now in most big towns and cities of the country.

Even at the onset of the pandemic, when experts recommended that bodies of the Covid-infected be cremated in electric or gas pyres, many picked traditional pyres. But given the desperate situation in the country now electric crematoria are working round the clock as people are flocking to this medically safe, clean, quick and eco-friendly mode of bidding adieu to their kin.

Yet, the sudden increase in the number of people succumbing to the virus has led to an acute shortage of wood and space, and a rise in black-marketing. While some have been amenable to adopting the eco-friendly, electric or gas crematoria, the pandemic calls for a collective rethink. Leaders of all faiths must find ways of consecrating this practice.

Sir — While news about human kindness amidst the pandemic abounds, there are also stories about grotesque travesties of humanity, with a black market not just for life-saving drugs and equipment but also things needed to put the dead to rest. People are having to pay through their noses and give up their life’s savings, after having lost their loved ones. This expense — coming probably after people have shelled out quite a bit of money for treatment — is an unbelievable strain on them.

The governments in the states and at the Centre must consider immediate steps to take over the provision of material and space for cremation completely. That is the only way to put an end to profiteering since there seems to be nothing that can conquer human greed. People must also be convinced to use electric crematoria in order to avoid long waits and high costs. This is also safer for Covid-positive patients.

Sir — It is shocking that people have no qualms about profiteering from the dead. While most people are being requested to opt for electric crematoria, this is easier said than done. Electric crematoria are breaking down all over the country or melting from being overworked. The number of such crematoria needs to be increased at once.

n Sir — At a time when the country is gasping for oxygen and people are dying from a lack of medical oxygen, I remember the hype in the national capital region and other parts of the country in the recent past surrounding oxygen bars. The rich and the idle went to these places for recreational use of oxygen. Now that the government has banned the use of medical oxygen for purposes other than medical, it must go a step further and regulate the use of medical products for recreational purposes in the future too. The pandemic has taught us how precious our medical resources are and these should not be treated lightly.

Sir — Six decades after upholding the constitutional validity of Section 124-A of the Indian Penal Code which penalizes sedition, the Supreme Court is going to revisit this British-era provision. This is heartening. ‘Sedition’ — defined as “conduct or speech inciting people to rebel against the authority of a state or monarch” — has no place in a democracy. In a system where the government is voted to power by the people, citizens have every right to campaign against the party at the helm of things if they are displeased with its actions. This is the very premise of a democracy. How, then, can ‘sedition’ be penalized?

Moreover, the law needs to have a finger on the pulse of the times. Governments in India — especially the present dispensation — routinely use the law of sedition to clamp down on dissent and dissenters. In the last couple of years, Indian prisons have been filled with students, educators, social workers and others who dared to speak up against the wrongdoings of the government. Citizens, irrespective of age, gender, or health, are languishing in prisons without bail because they decided to stand up and demand accountability from the government that they elected to power.

Sir — Over the decades, the State has almost unfailingly been invoking offences of ‘sedition’ or ‘corruption’ when seeking to discipline an adversary. That was the position in the past and it remains unchanged in the present. It is to the credit of the judiciary that most such foisted cases end in acquittals. But this does not change the actions of those wielding the levers of power. In India, the process is the punishment. The moment someone becomes an accused in a criminal proceeding, he or she gets entangled in the dilatory criminal judicial system of the country. Efforts have to be made by such a person to avoid police custody and custodial interrogation, get anticipatory bail to avoid arrest, get regular bail from the court, appear at all the hearings, and the list goes on. It is thus heartening that the Supreme Court is going to reconsider the constitutional validity of the provision of sedition. It is time this antiquated law was done away with.