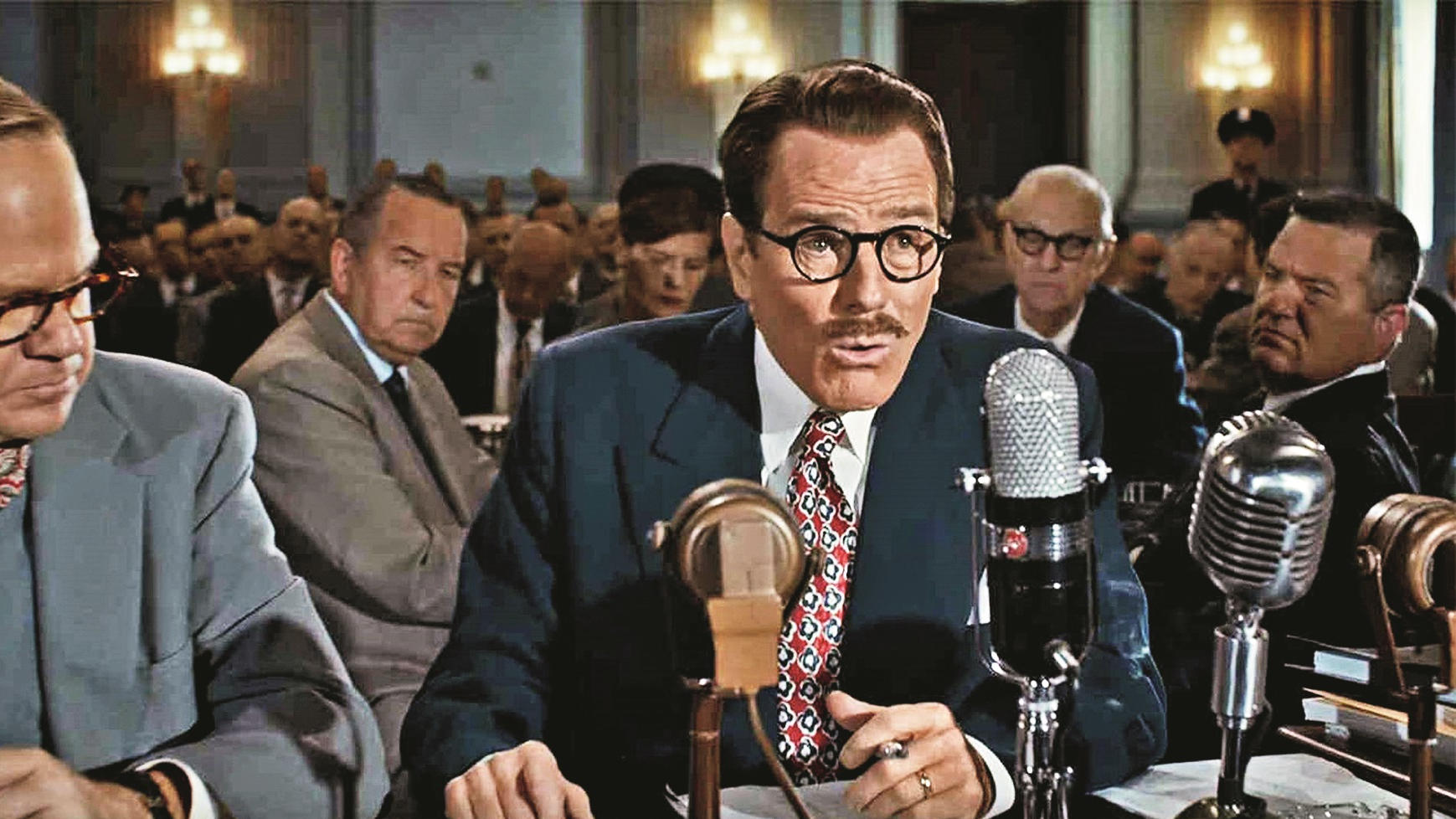 At around the halfway point in Jay Roach’s film, Trumbo, the main character finds himself standing naked in a penitentiary cell in Kentucky, being checked over by a contemptuous prison guard. He opens his mouth and turns his head to the left and to the right. He obeys instructions to display different aspects of his nether regions. He bends, he lifts, he straightens, entirely at the mercy of the State and its prison system. As you watch, Bryan Cranston’s brilliantly played Dalton Trumbo is shrunk down to the bare essentials of his body, shorn of all dignity and humanity. From being one of Hollywood’s leading scriptwriters and one of the most highly-paid scribes in the world, Trumbo is now reduced to serving time in jail, branded as a traitor to his country, or what in today’s India might be termed ‘anti-national’.

Like several others working in Hollywood, people with a certain belief in equality and justice, Trumbo had joined the Communist Party of the United States of America in 1943. At that point, neither the Party nor joining it was illegal; Soviet Russia was a key ally of the US in the war against Germany and Japan. Shortly after the war though, unbridled suspicion and surreptitious conflict grew between the two powers, leading to the beginning of the Cold War that would last for forty years. The start of this Cold War was braided together with the rise of a heinous right-wing movement in American politics that was both powered and piggy-backed upon by all kinds of vicious scamsters and ruthlessly amoral power-seekers that included Joseph McCarthy, Richard Nixon, Ronald Reagan and John Wayne. If the dubious slogan today is ‘Make America Great Again’, at that time it was ‘Make America Safe from Communism’. While there was a very real and brutal struggle between Stalin’s Russia and Truman’s US, by the end of the 1940s these small-eyed vigilantes of the American Right had launched their witch-hunts in academia, art, theatre, literature and, not least, the film industry in Hollywood, which was obviously recognized as hugely popular and influential.

Trumbo is a gripping film that lays out the story of these witch-hunts and blacklists that damaged (and sometimes even took) the lives of so many of Hollywood’s most talented people. At first, when we see the much-sought-after Dalton Trumbo at the peak of his fame, he and his friends find all the talk of the forthcoming enquiries into ‘Un-American Activities’ risible. Soon, however, all the humour seeps out of the situation. In a progression that we in India will recognize today, the rumours solidify into targeted action by powerful politicians working in tandem with ambitious and unscrupulous members of the media; soon, official black cars are driving up to people’s houses, government agents interrupting family meals as they deliver subpoenas, summoning Trumbo and his colleagues across the country to Washington to undergo questioning at Congressional hearings. Neighbours become self-appointed monitors set upon ‘cleansing’ the country of ‘Commies’. The only crime these scriptwriters, actors and other cinema people are guilty of is espousing political views that run counter to those of the reactionary populists. At no point have they ever ventured near any violence, espionage or treachery. Yet, in a short time, these targeted men are ensconced in meetings with lawyers, discussing what they can legally do to protect themselves. What is at stake is freedom of speech and freedom of political affiliation, two central tenets of the American Constitution.

In one telling scene, Trumbo convinces his cohorts that they should take printed pamphlets about the First Amendment, which guarantees freedom of speech, and wait outside a meeting of the Motion Picture Alliance for the Preservation of American Ideals, the right-wing group formed by people like John Wayne and Hedda Hopper, a powerful Hollywood newspaper columnist. When people coming out of the meeting are handed the pamphlets, they fling them away or tear them up. There is a confrontation when Trumbo points out to Wayne that all the pamphlet is saying is that Congress has no right to investigate how people vote, how they pray or how they make movies. Wayne replies that the new era dawning has no time for Trumbo and his ‘kind’ — people who have no idea why America just fought and won the Second World War. Trumbo points out that he and many of his comrades had actually seen action at the front while Wayne “spent the war on a film set, shooting blanks”. Again, the scene could remind an Indian sharply of the current rash of ‘patriots’, most of whom belong to an organization that actively subverted our freedom struggle and didn’t recognize the Tricolour till recent spikes of hypocrisy and expediency sent them scurrying to construct outsized flags.

As Trumbo and others serve out the jail sentences imposed by a corrupt cabal of Congressmen, as they negotiate years in the workless wilderness brought about by the unofficial but fearsomely imposed blacklist, we see the slow decline and downfall of the confidence tricksters peddling their poisonous patriotism. When people begin to suspect that not one but two scriptwriting Oscars have been won by Trumbo writing under pseudonyms, the press starts to ask questions. In a television interview, Trumbo suggests that perhaps it’s time for the House Un-American Activities Committee itself to be put under the scanner. “They were convened to uncover enemy agents, expose Communist conspiracies... well, here we are, thousands of hours and millions of dollars later. Agents uncovered? Zero. Conspiracies exposed? Zero.” Trumbo then continues about the blacklist. “I’ve seen the horror, cruelty, and the hideous waste of lives it has produced.”

We live in a very different context, separated from that time by geography, culture and sixty-plus years. Nevertheless, the echoes come up, not just when looking at the recent assault on sections of the Bombay film world but also when seeing the patently false cases and malicious framing of social activists, students and academics around the country. It’s hard to be optimistic about India right now and seeing the US drop deeper and deeper into a trough of racism and illiberality doesn’t help either. Yet, there must be hope that the same discrediting and disgrace that consigned the Un-American Activities Circus to the hazardous waste dustbin will also happen to the nefarious Unlawful Activities (Prevention) Act. There must be hope that one day these investigating agencies will themselves be investigated by fair and stern examiners, that one day these chest-thumping jingoists will themselves be interrogated and punished for their betrayal of our Constitution, that one day these hectoring, braying anchors on our TV screens will have to answer for their greed-driven misdeeds.