Language wars in Jammu and Kashmir 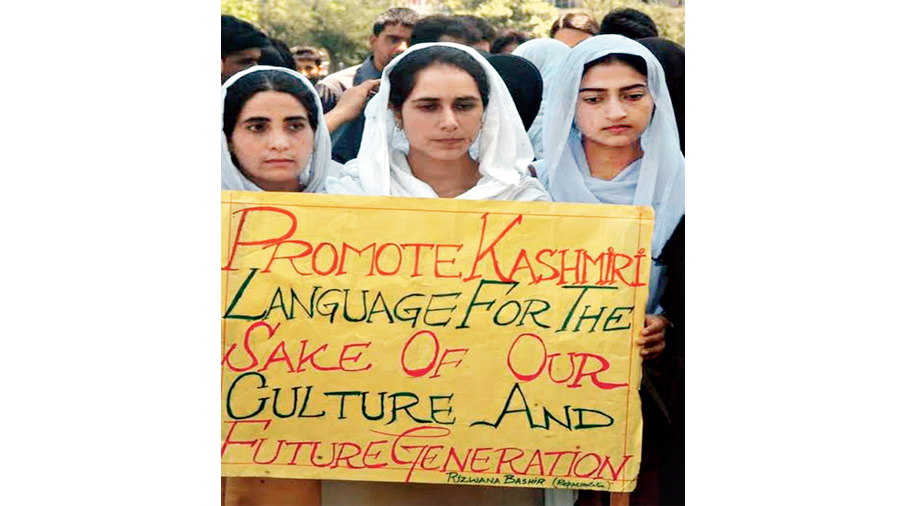 Language has proven to be at the heart of political consciousness and assertion and has shaped history in the subcontinent.
YouTube screengrab
Luv Puri   |   Published 02.12.20, 12:17 AM

One of the fallouts of the revocation of Article 370 that has arguably given a new meaning to the constitutional relationship between Jammu and Kashmir and India is the adoption of five languages — Hindi, Kashmiri, Dogri, Urdu and English — as the official languages of J&K. After getting the president’s assent, the Act in this regard was notified by the Union ministry of law and justice on September 27, 2020.

Language has proven to be at the heart of political consciousness and assertion and has shaped history in the subcontinent. In India, it led to the passage of the States Reorganisation Act, 1956, thereby creating linguistic states. Pakistan was fissured into two halves as Urdu was forcibly imposed on Bengali-speaking East Pakistan.

The importance of linguistic identities in J&K, with a population of nearly 12.5 million, is no different and has often shaped political undercurrents in this sensitive region. The decision to exclude some languages spoken in J&K has, understandably, triggered protests over the denial of the recognition accorded to the five languages. J&K’s debate on linguistic recognition has a multi-dimensional connotation, both internal as well as external, and, yet again, exposes the decades-old systemic flaw of top-down policymaking on J&K marked by the lack of an ability to tap into accrued institutional knowledge.

J&K was created in the 19th century by merging diverse cultural and geographical units. While the Kashmir Valley has its own distinct culture and language, sparsely populated Ladakh, which scaffolds Kashmir Valley to the north, is the gateway to Tibetan and Central Asian culture and ethnicities. Geographically and religiously diverse Jammu, to the south, adjoins culturally akin western and eastern parts of the once united Punjab province.

Urdu became the official and de facto link language in culturally and linguistically diverse J&K in 1889 replacing Persian. The introduction of Urdu inadvertently shaped the politics of the future. The monarchs encouraged Urdu literates from neighbouring Punjab to settle in J&K. Faced with a scarcity of job opportunities, a section of the Kashmiri Pandit community, which had traditionally been the administrative class in the Valley, petitioned the princely rulers from time to time to discourage this practice. This led the princely ruler to enact a state subject law on April 20, 1927 that made it difficult for outsiders to possess land and get jobs in J&K. In a changed political context, the new political elite in 1954 enacted its own state subject law that defined a ‘Permanent Resident’ in J&K. A PR was a state subject on May 14, 1954, one who had been a resident of the state for 10 years and had lawfully acquired immovable property in the state. Its abolition became one of the foundational tenets of the Bharatiya Jana Sangh, which later became the Bharatiya Janata Party on April 6, 1980, as it argued that the concept of PR of J&K goes against the concept of one India.

Although Urdu was the only official language of J&K, as per the 2011 census, Urdu speakers numbered merely 19,000. In the pre-Independence era, the two broad linguistic distinctions in J&K were Kashmiri and a second group of akin languages, namely Dogri, Gojri, Pahari and Punjabi. For a long time, the second group was stated to be different dialects of Punjabi. It is a lesser-known fact that while the princely state of J&K was popularly known as ‘Kashmir’ the non-Kashmiri-speaking segment comprises more than 60 per cent of J&K’s population. The bifurcation of J&K in 1947 kept the Kashmir Valley more or less intact while dividing the more populous and religiously diverse Jammu. The population of Jammu, as per the 1941 census, was 1.9 million whereas that of Kashmir was 1.7 million.

In the post facto reality of 1947, the two linguistic groups became nearly equal on the Indian side of J&K although the Kashmiri-speaking population marginally surpassed the other group. Being the single-largest linguistic group on the Indian side of J&K, the Kashmiri language was recognized in the Eighth Schedule of the Indian Constitution, which lists the official languages of the Republic of India. Each language, previously termed as a dialect of Punjab, started asserting its distinctiveness. For instance, after 50 years of effort by a progressive group of writers, poets and intellectuals like Ram Nath Shastri and Padma Sachdev, Dogri, spoken in Jammu, was finally recognized in the Eighth Schedule in 2003.

As per the 2011 census, out of the 12.5 million residents of J&K, 6.7 million speak Kashmiri and 2.6 million speak Dogri. The 2011 census enumerates that 2.6 million speak Hindi in J&K. In fact, this figure needs to be unpacked to get a better sense of the actual reality. Census enumerators have denoted speakers of Gojri and Pahari, spoken in the border districts of J&K along the Line of Control, as Hindi speakers in addition to some other languages spoken in J&K. In contrast to Kashmiri and Dogri, the other languages are not recognized in the Eighth Schedule. The census mentions separately that the number of Gojri speakers is approximately 1.2 million and that of Pahari speakers around 1 million in J&K.

Gojri and Pahari have their own importance in the context of J&K. They are collectively spoken by at least 17 per cent on the Indian side of J&K. Gojri is spoken by Gujjars-Bakherwals who live in Jammu as well as in the Kashmir Valley and a large section of their population are seasonal nomads. In J&K all of them are Muslims. Outside J&K, the vast majority of Gujjars are Hindus, particularly in the region around Delhi. The other linguistic identity, Pahari, a language akin to Pothwari spoken in the Rawalpindi-Jhelum belt of Pakistani Punjab, has a unique geopolitical significance. On the Indian side, Pahari is spoken in the districts of Baramulla and Kupwara of Kashmir Valley and in Rajouri and Poonch in Jammu along the LoC. It is a religiously diverse linguistic group.

In Pakistan-administered Jammu and Kashmir, which excludes Gilgit-Baltistan, Pahari is the main language spoken by at least three million residents. Many British Muslims are originally from Mirpur and Kotli districts of PAJK. If the number of first-generation and second-generation British citizens are included, then globally Pahari speakers would be more than four million. A lot of work has been done in the Pahari community by the diaspora. A magazine journal, Chitka, was published in the 1990s. BBC radio has programmes in Pahari. Pahari, as understood by Indian census enumerators, is also spoken in Himachal Pradesh and Uttaranchal although the Pahari spoken in one state is quite different from the other. Apart from Pahari and Gojri, there are 60-odd languages that are listed under the category, ‘Hindi’, and they include languages such as Bhojpuri, which has seen an explosion in cinematic and musical output.

The prevailing political vacuum in J&K has eliminated a feedback loop that could better inform policymaking based on ground realities and past experiences. Many laws formulated in the last one year were amended later. On account of the significant presence of speakers on both sides of the LoC, the claim of linguistic groups like Gojri and Pahari is difficult to ignore. Ignoring such claims may fuel language wars in this sensitive region. In addition, the ramifications of the official recognition have to be thought through by factoring in administrative efficiency and market competitiveness. If we apply the model of Indian states, all official matter and possibly STEM (science, technology, engineering and mathematics) courses will have to be translated into the official languages. At this stage, hardly any language native to J&K is equipped to meet this goal.

L. Puri is the author of Across the LoC