MEA must nurture Washington ties with imagination, and not leave it on auto-pilot 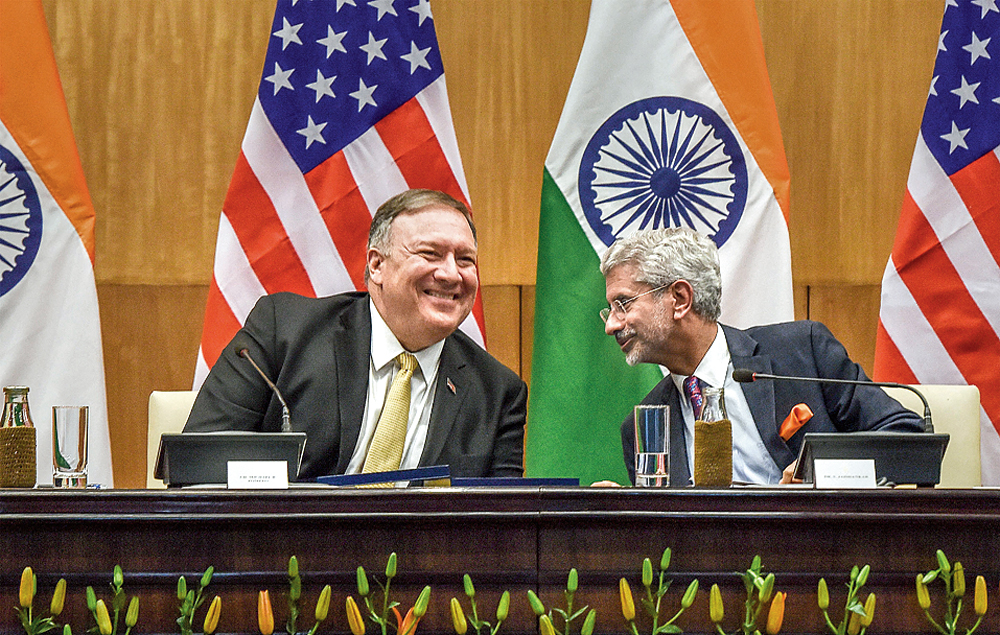 The convening of the second “2+2 Dialogue” on December 18 among defence and foreign ministers of India and the United States confirms the Donald Trump Administration’s resolve to insulate their bilateral relationship from the vagaries of an election year in America.

Equally, the meeting in Washington will demonstrate the Narendra Modi government’s determination to build on the pillars that were erected at the inaugural 2+2 Dialogue in New Delhi 15 months ago.

S Jaishankar and Rajnath Singh, on the one hand, and secretary of state Mike Pompeo and defence secretary Mark Esper on the other, will collectively convey an unambiguous message that the cacophony in Washington on Indo-US relations is part of the dynamism that the relationship has acquired in the last two decades.

The ultimate proof of that dynamism is the bright reality that the 2+2 Dialogue is taking place when political Washington is consumed by the drama of a Presidential impeachment process on Capitol Hill. Despite minor hiccups, the bipartisan support in America for Indo-US bonhomie endures.

The second 2+2 Dialogue will provide another opportunity for Indians outside the government, engaged in public discourse, to come to terms with American exceptionalism that speaks in many voices but unites in protecting core interests: in this case, advancing ties between India and the US in critical areas.

Since it is a given that the latest meeting will be a positive forum that looks ahead and attempts to find ways to resolve bilateral differences, what is truly important is to examine whether both sides have the capacity to realize the full potential of their shared vision for the future.

There are no two views that in recent years, some aspects of Indo-US relations have hit a plateau because of inherent weaknesses within the Trump administration. Within the Indian bureaucracy, an inexplicable complacency in the last two years at least, has hamstrung progress in plans that the political leadership in New Delhi has been keen on and is committed to.

Trump will complete his current term as President in 2021 without having had a regular, confirmed assistant secretary of state for South Asia during his entire tenure. He will be the first US President to do so since the post was created in 1992 and expanded in 2006 to include Central Asia as well. The assistant secretary of state is the most important person for all things related to India in an American Administration.

There was a time not long ago during the Trump presidency when at least half of the 15 posts in the state department’s Office of India Affairs, including that of a deputy director, economic officer and political officer, were vacant for an extended period. During critical times for the Trump administration’s India initiatives, there were few people on the ground to work on these initiatives.

In a mirror image of sorts on the Indian side, the Indian embassy in Washington functions with just a single Indian Foreign Service (IFS) officer of the rank of minister. Members of the US Congress initially began raising questions about Kashmir policy, the National Register of Citizens and India’s recent human rights record.

It took some time before these doubts acquired the form of a bipartisan Congressional resolution. During this period, there was no one of appropriate seniority or experience at the mission – other than the ambassador – to deal with aides to both senators and members of the House of Representatives to defuse the situation and prevent a Pakistan-Muslim-Democratic-liberal coalition from emerging on Capitol Hill.

The Ambassador, Harsh Vardhan Shringla, has done his best, but single-handedly. He has travelled extensively, meeting members of Congress in their states and even in their districts. Shringla has a stellar record of having contributed a great deal in the turn around in relations with Bangladesh as high commissioner in Dhaka prior to his current appointment. But there is only this much he can do in America without support staff who have the capacity to follow up.

Similarly, when the mainstream US media was beginning to write unfavourable stories on India earlier this year, a mere first secretary was heading the press and information section of the embassy. He had no access even to metro reporters in US newspapers, let alone to any editorial writers or influential columnists. For at least 30 years, a minister headed the press section, but the ministry of external affairs (MEA) has not sent one for some years now.

When India tested nuclear weapons in 1998 and was up against one of the worst phases in relations with America, the mission in Washington had eight minister-level officers to assist then ambassador Naresh Chandra in turning such adversity into the biggest engagement of the US ever. Two years later, President Bill Clinton visited India.

At that time, Chandra’s deputy chief of mission was an experienced ambassador himself who had gone through diplomatic trials by fire, having been expelled by Fiji’s anti-Indian military junta and faced an attack on the high commission residence in Nairobi. Alas, no more.

It is a mystery why the MEA transferred senior slots out of its Washington embassy and chose to send a plethora of only junior second secretaries and first secretaries in their places. In the last two years, MEA appears to have concluded that with Indo-US relations on a growth trajectory, good officers can be sent elsewhere and that ties with Washington can be on auto-pilot. Recent events have proved that relations can prosper only if they are nurtured with imagination at the external affairs headquarters in New Delhi.