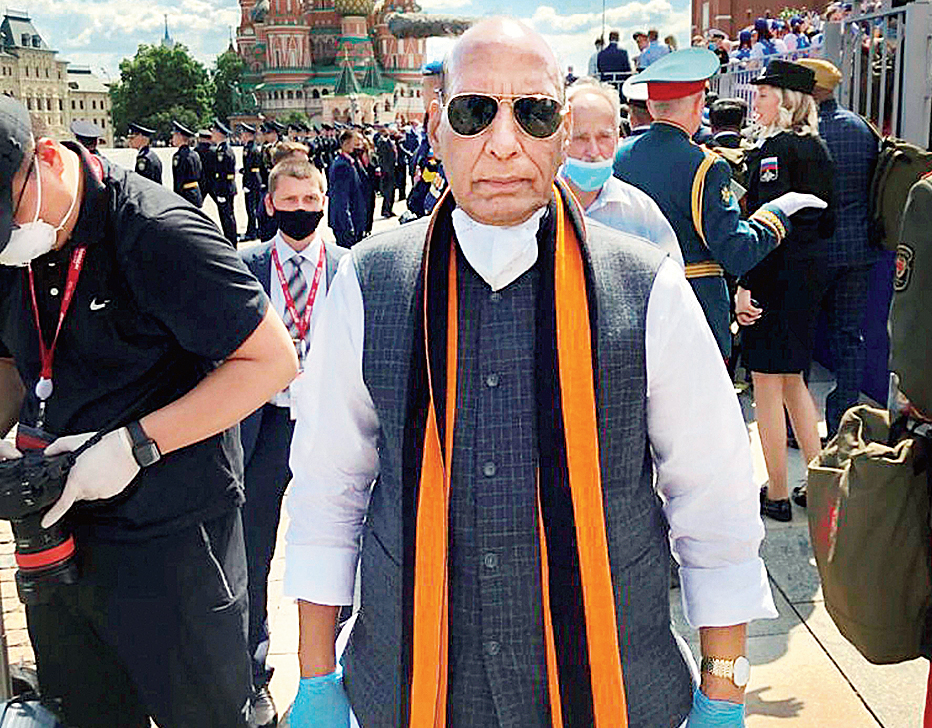 Rajnath Singh’s mission to Moscow recalls Xan Smiley’s famous dismissal of the Soviet Union as “Upper Volta with rockets”. Xan is editor at large of The Economist and a great-grandson of Lord Minto. The bon mot he coined in an article in Britain’s The Sunday Telegraph in 1987 (and which has since been attributed to august personages like Henry Kissinger and Helmut Schmidt) seems apposite for an India that thinks sophisticated arms will solve problems rooted in economic backwardness.

Singh was primarily on a junket. The excuse was last Wednesday’s Victory Day Parade — the original of our own Republic Day jamborees — in Moscow’s Red Square to commemorate the 75th anniversary of the end of what the Soviets called “The Great Patriotic War”. India’s 75-member tri-service delegation marched with other celebrants, but given New Delhi’s special relationship with Moscow — Russia provided 62 per cent of India’s total weapons imports during the last five years — India had to be represented at a high political level too. Narendra Modi himself might have cut a dash in an outsize safa if he had not been inching closer to the United States of America and Israel, probably as much for their weapons as because Donald Trump and Benjamin Netanyahu, whom he fawningly calls “Bibi”, are just his kind of people.

The jaunt’s real purpose was evident in the defence minister’s jubilation over a “positive and productive” outcome: Russia agreed to expedite delivery of the five regiments of the Russian S-400 Triumf anti-aircraft missile system India contracted to buy for more than $5 billion, with an $800 million advance payment, when Vladimir Putin visited New Delhi in 2018. It isn’t clear whether the assurance also applies to India’s additional purchase of 33 Russian-made Su-30MKI and MiG-29 UPG class jet fighters. Or whether they, too, are scheduled to be delivered at the end of next year like the S-400. But the urge to lay hands on the S-400 as quickly as possible seems to have been triggered by the clashes in Ladakh.

So is the clamour to boycott Chinese goods, shun Chinese cuisine and deny Chinese visitors hotel accommodation. Popular frenzy is only to be expected in times of crisis. Dachshund dogs (originally developed in Germany more than 300 years ago) were hung from London lamp posts during the First World War when even the Royal Family thought it prudent to adopt an English name. There was a move during the Zinoviev letter controversy on the eve of Britain’s 1924 general election to repaint letter boxes, red being associated with the Soviet Union. Japanese residents in Calcutta put up ‘JAPAN’ stickers on their cars in 1962 so that they were not mistaken for Chinese. Greater sense is expected of government leaders. But not perhaps from those who don’t realize that given India’s dismal record, it is counter-productive to keep harping on luring foreign firms away from China. Of the 56 companies that left in 2018-2019, only three came to India. Eight went to Thailand, two to Indonesia and 11 to Taiwan. Vietnam gained most with 26.

Indian spokesmen from the prime minister downwards speak in so many tongues that nothing seems certain. But it passes understanding how an anti-aircraft weapon system or jet fighters can be any more relevant than clichés like ‘Swachh Bharat’ and ‘Atmanirbhar’ in a border skirmish fought with fists, rocks, clubs and barbed wire in the most primitive fashion imaginable. So far as anyone knows, India is not fighting an all-out war. There has been no indication of any intention of bombing Chinese cities. Nor of any need to defend our cities from the Chinese. Why then the sudden scramble for a sophisticated air defence system unless, like Smiley’s Upper Volta aka the Soviet Union, izzat demands the most ostentatious that money can buy?

It also passes understanding why India did not sit up and take note when Lieutenant-General Xu Qiling replaced the 63-year-old General He Weidong as head of Western Theatre Command and supremo in Xinjiang and Tibet. New Delhi’s China-watchers must have known that the 57-year-old Xu, the PLA’s rising star and reputed favourite of Xi Jinping who promoted him lieutenant-general last year, was chief of staff of the elite 54th Army Corps involved in suppressing the 1959 Tibetan uprising and the 1989 Tiananmen Square massacre. His predecessor has been given a less arduous pre-retirement posting in the Eastern Theatre Command. “[T]he Western Theatre Command needs a younger commander to lead frontier soldiers and officers in this current sensitive period,” a military insider told Hong Kong’s South China Morning Post. “The working environment in the Western high altitude is very tough and even young people age prematurely there.”

Inattention to such details is part of a sorry tradition of overlooking or ignoring significant developments on the border. The most notorious oversight was of the construction between 1951 and 1957 of China’s National Highway 219 through the Aksai Chin plateau. The 1999 infiltration of Pakistani soldiers disguised as shepherds in Kargil also went unnoticed. Much of the current controversy centres on the more recent surreptitiously-built four-kilometre road between two mountain spurs — Fingers 8 and 4 — fringing Pangong Tso (lake) that has unilaterally shifted the Line of Actual Control in China’s favour.

The main relevance of missiles and fighters in this situation is to make a political point, like the transfer of MiG-29s to Indira Gandhi’s government before any Warsaw Pact member had them or the needs of even the Soviet air force had been fully met. “What kind of people are these Soviets who said that they have no such thing as a MiG-29 in October and agree to their manufacture in India by December of the same year?” she asked ingenuously, affecting not to understand Moscow’s volte face to pre-empt Ronald Reagan. Last year, Putin expedited the delivery of the S-400s to Recep Tayyip Erdogan’s Turkey, a Nato member, and snubbed Trump. New Delhi expects Trump to issue a waiver as he can under US law, presumably because of his own bitter wrangling with Beijing. But offending China will not strengthen India so far as the present limited confrontation is concerned.

Singh’s jubilation hints at other ‘proposals’ India has made and the Russians have received positively. But however much Moscow’s position may have changed since 1962, it is shortsighted to place too much reliance on weaponry alone. India’s fundamental problems are social and economic. Oxfam’s appeal for donations says politely that the pandemic “has shown that India’s public health system is not equipped to fight a health crisis”. Truth to tell, it isn’t equipped even to look after the minor ailments of 1.3 billion Indians on a regular permanent basis. The obtuseness of the administrative officer in Delhi who refused to visit Shanghai because it was only “a bigger Mumbai” prevents us from acknowledging that India lags behind China in every index of growth and development. Without admitting that China’s urban development, industrial infrastructure and special economic zones are superior to ours, we will never catch up, leave alone surpass China.

India was in recession even before Covid-19 cost the exchequer an estimated Rs 30.03 lakh crore with dire predictions of the economy shrinking this year to 3.1 per cent and consequent incalculable human misery. China has also suffered grievously, but its GDP is 4.78 times greater than India’s, and 2.38 times higher when purchasing power parity is taken into account. That economic muscle is reflected in China’s military might, not the other way round. It’s only demographically that the two countries are comparable and that screams of India’s weakness. Intense congestion means less of everything for most people. In short, today’s equivalent of rockets instead of houses, jobs, schools and hospitals.