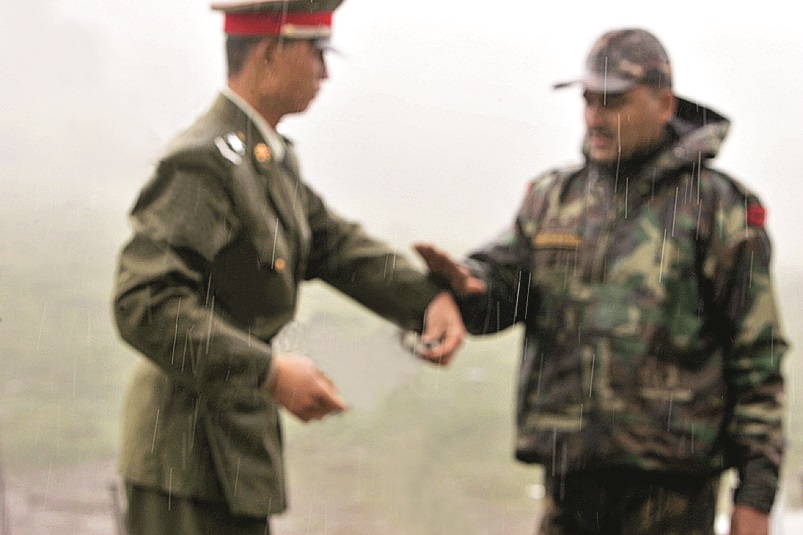 The face-off between Indian and Chinese forces in the Ladakh region of the Line of Actual Control, resulting in the death of 20 Indian jawans and an unspecified number of casualties in the People’s Liberation Army, has provoked a mixed reaction within the country. (Representational image)
AP Photo/Gurinder Osan, File
Swapan Dasgupta   |   Published 25.06.20, 12:25 AM

The face-off between Indian and Chinese forces in the Ladakh region of the Line of Actual Control, resulting in the death of 20 Indian jawans and an unspecified number of casualties in the People’s Liberation Army, has provoked a mixed reaction within the country. While diplomatic and military manoeuvres on both sides were only to be expected, the domestic fallout has not followed a single course.

At one level, the country has witnessed a torrent of outrage over the deaths of soldiers defending Indian territory against an organized incursion. This was accompanied by demands that the Narendra Modi government take immediate steps to make India inhospitable for Chinese goods and businesses. In parts of the country, there were bonfires of products made in China. However, in the main, the reactions followed the course of domestic political polarization. The Congress and its allies hit out at the Modi government for its alleged failure to defend Indian territory against foreign aggression and causing the deaths of soldiers who were under instructions to not use firearms — the encounter was in the nature of hand-to-hand combat. The former prime minister, Manmohan Singh, pointed to Modi’s statement that there had been no intrusion to accuse his successor of ceding Indian territory to China. In many circles associated with the Congress, China’s recent aggressiveness is being viewed as Beijing’s bid to cut Modi to size and deny him a place on the High Table of world leaders.

The Bharatiya Janata Party has hit back by pointing to the Congress’s dismal record of having more or less gifted the whole of Aksai Chin to China, Jawaharlal Nehru’s Himalayan blunders in 1962, and the systematic neglect of border infrastructure during the many decades it was in power. The Congress has also been accused of systematically demoralizing Indian forces by making the LAC skirmish a subject of political dispute.

Yet, viewed with some detachment, it would seem that the latest bout of Sino-Indian tensions hasn’t engulfed India in another war hysteria. There are three reasons for this relatively subdued reaction.

First, both at the level of the Establishment and popular opinion, there is recognition that China cannot be dealt with using the same strong-arm tactics employed against Pakistan. Apart from the reality of China’s undeniable military superiority, there appears to be a lingering psychological impact of the debacle in the 1962 war, a defeat that rankles in the popular imagination. The national determination that is so in evidence when it comes to dealing with Pakistan’s transgressions is diluted in the case of China.

Second, the sheer remoteness of the LAC sometimes makes it difficult for the reality of the conflict to become a pressing issue for a significant number of Indians. Nehru’s casual dismissal of Aksai Chin as an area where “not even a blade of grass” grows is, alas, not unique and may even be an underlying reason why many governments in the past were not serious in developing the physical infrastructure of regions around the LAC. Unlike Pakistan, which is regarded as the historic enemy of India — even when it comes to the inhospitable Siachen glacier — China retains its traditional exotic flavour in contemporary India. It is worth recalling that unlike Pakistan, which is identified and somehow equated with Muslim invasions from Central Asia and Afghanistan, China remains mysteriously distant. Historically, India’s relations with China, until the 19th century colonial trade, have been extremely tenuous and invariably mediated through Tibet, which, before its recent demographic transformation, was always distinct from China. India, to put it bluntly, still views China as a remote entity, not a visible historic enemy. In British India, the importance of frontiers — particularly for the likes of Lord Curzon — was paramount and the best minds in the bureaucracy were deployed in the Indian Political Service. Independent India, unfortunately, hasn’t always maintained this tradition.

Finally, there is the preoccupation of India — and indeed the whole world — with the Covid-19 pandemic and its devastating economic consequences. A border brawl — however deadly — in a remote and unfamiliar region is unlikely to be of paramount importance to the global community and, indeed, it hasn’t.

In today’s context, these lapses are ominous. Demarcating the LAC with cartographic precision has always been a difficult project. Since 1949, or even before it, China has been loath to accept the sanctity of the frontiers established by British India. In particular, China has been ambiguous over the status of what it regards as the five fingers of Tibet — Arunachal Pradesh, Bhutan, Sikkim, Nepal and Ladakh. It has used these claims strategically to maintain pressure on India and viewed the LAC as flexible on the margins. Interminable rounds of border talks may have settled the status of Sikkim but the status of Arunachal Pradesh has given China ample opportunities to keep the border issue alive. Three years ago, there was a limited face-off over Doklam in Bhutan and today it is Galwan and Pangong Tso in Ladakh.

It would seem that China is intent on using unending pressure in different parts of the LAC to keep India on tenterhooks. Since 2014, Modi has expended a great deal of political capital in trying to develop a personal bonding with Xi Jinping, perhaps hoping that would help the two countries evolve a new equilibrium. Simultaneously, however, India has speeded up infrastructure building all along the eastern borders, reversing the old policy of leaving these areas underdeveloped and even inaccessible. It has done what China has systematically done over the past four decades. Capacity building has also been complemented by the categorical refusal to acquiesce to China’s global muscle flexing. India’s refusal to join the Belt and Road Initiative and its last minute opting out of the RCEP were widely viewed — and not least in Beijing — as New Delhi’s bid to check the development of a unipolar Asia. Additionally, to prevent China from securing a strategic stranglehold over its economy, India has put innumerable roadblocks on the path of Chinese companies, but without blocking them altogether. Finally, Delhi has taken many strides forward in developing its strategic relationships with the United States of America, Japan, Australia, Vietnam and the Gulf countries and has checkmated Pakistan, a country China habitually used as a pressure point against India.

On its part, China has supplemented its pressure on the LAC with resounding success in drawing Nepal out of India’s orbit. The creation of an Indo-Nepal border dispute has very successfully pitted Nepali nationalism against India and drawn the Himalayan country into the embrace of China. The recent developments in Nepal constitute a monumental setback to India and could have wider repercussions. China, it should be remembered, still has the capacity to bolster insurgent movements in eastern India and bankroll disruptive movements in the rest of the country. Over the past two decades, Beijing has successfully built influential political and civil society networks within India that can be used in different ways.

In sum, as of today, while the India of 2020 is no way comparable to the India of 1962 that lacked the capacity to translate its pious rhetoric into anything more substantial, China itself is in a far more commanding position globally. Its ability to do harm to India exceeds India’s retaliatory strength, at least at this juncture. This asymmetry presents the greatest challenge to the Modi government. India is on the cusp of a prolonged Cold War with China. The conflict has to be played with imagination and foresight. To counter China, India has to think big and play smart.