In Modi 2.0, Shah is the stronger role model

Delhi diaries: BJP leaders take to fiery speeches at rallies and on twitter 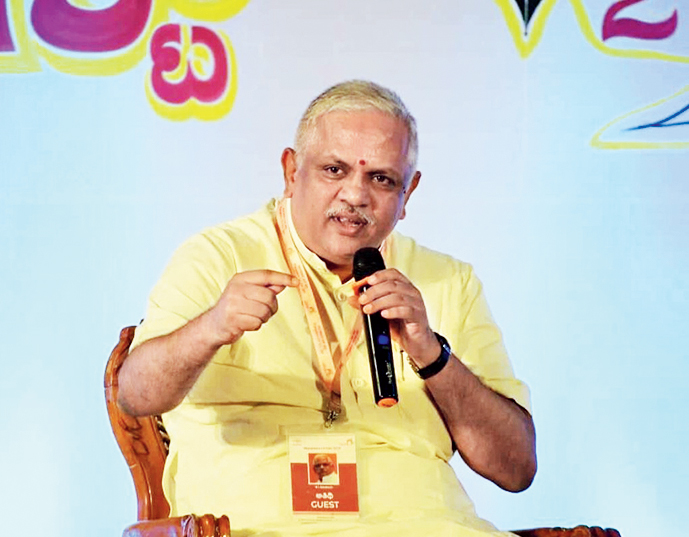 An overwhelming majority of leaders from the Bharatiya Janata Party believe that the Modi 2.0 government is not about Narendra Modi but Amit Shah, who is seen as the decisive and defiant leader. Shah’s dominance is so strong that he seems to have turned into the new role model for many party leaders. Take, for instance, BJP’s working president, JP Nadda, who had been known to be a calm and reasoned leader. These days, he makes a deliberate attempt to make fiery speeches. There are others who do not get much opportunity to speak publicly and thus have to channelize their aggression into Twitter. BL Santhosh, the BJP general-secretary (organization), is one such leader. The third-most powerful man in the party hierarchy, Santhosh is essentially supposed to act as a bridge between the Rashtriya Swayamsevak Sangh and the BJP, but he now refuses to stay in the shadows. He went all out on the JNU issue recently: “Where was your conscious hiding when lakhs of Kashmiri Pandits were driven away or brutally killed ...? This selective aakrosh has made many a liberal irrelevant ... Don’t become one ... [sic]”

Santhosh was responding to a Twitter handle run by the St Stephen’s College alumni. He got an earful for his aggression. “Sir, most of us, the students who protested yesterday, were not born then... For our inspiration please tell us how you helped the Kashmiri Pandits in 1990,” came the reply from the handle. Continuing his impression of Shah, Santhosh said that he had been in college in 1990s and had protested under the banner of the Akhil Bharatiya Vidyarthi Parishad, and collected money for the Pandits. “ABVP? Say no more sir,” was the reply from the Stephanians. This must have aggrieved Santhosh beyond words for no reply has been forthcoming since.

Since India achieved independence in 1947, it has been the lodestar of democracy in the subcontinent. But now it seems to be falling behind while its neighbours march ahead. Critics of the Modi government who insist that this dispensation has put the country on reverse gear on the democratic front were handed some strong ammunition by the Sri Lankan president, Gotabaya Rajapaksa.

On the day when students of the Jawaharlal Nehru University were lathi-charged by the police for trying to reach the president’s house, the Rajapaksa-led government in Sri Lanka welcomed protesting students into the presidential secretariat for talks. The president was not personally there but his additional secretary talked to students along with education ministry officials. Rajapaksa — who is working on softening his image — tweeted: “Contrary to the usual tear-gas & baton charge that greeted Uni student protestors previously, I invited the union reps to Pres office…” Is the JNU vice-chancellor, M Jagadesh Kumar, listening?

Still with JNU. Students there are often trolled for their infectious use of the Azadi chant — slogans calling for freedom from regressive practices — popularized by the former student leader, Kanhaiya Kumar. Ultra-nationalist activists and TV anchors have cited this chant as proof of anti-national activities in the university.

It is, then, more than a little ironical that a Hindutva group in the capital is trying its level best to lay claim to the slogan. Posters by the Hindu Sena, placed by Gurugram-based strongman, Surjit Yadav, have appeared on lamp posts around JNU after the right-wing rampage against anti-fee hike strikers, calling for Azadi from “enemies of the country”, “Maoist terrorists”, “those who curse the army”, “murder the army”, “shoot” and “stone police”. This is the same fringe vigilante group led by Vishnu Gupta which had been in the news for ‘raiding’ a Kerala house to check for beef in 2015, and for publicly celebrating Donald Trump’s birthday and the Victorian Proclamation of 1858.

The senior BJP leader and minister in Karnataka, KS Eshwarappa, must have dosed off in his history class. Recently, the Congress leader, PC Siddaramaiah, responded to a query on why he opposed the CAA, NRC and NPR, thus: “Forget the date of my parents’ [birth], I don’t even know mine.” Eshwarappa lost no time in taking a swipe by asking “How can someone who doesn’t know his own date of birth know the date of birth of Tipu Sultan?” The question was loaded with BJP’s opposition to the declaration of Tipu Jayanti in 2016. Eshwarappa would know how if only he had been paying attention to his history lesson. 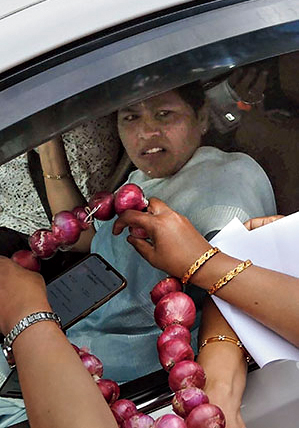 Congress activists attempt to garland BJP leader and MP Shobha Karandlaje with onions during a protest against hike in fuel and onion prices, at Chikmagalur,
(PTI)

The BJP seems to have a particular distaste for the humble onion. While the finance minister, Nirmala Sitharaman, declared on the floor of Parliament that rocketing onion prices did not worry her since her family never used it, another leader from Karnataka, Shobha Karandlaje, faced some embarrassment when a protester tried to garland her with a string of pricey onions recently. As she pushed the woman away from her car, her driver floored the accelerator to escape the onions. Onion prices are not the only thing spooking BJP leaders; they cannot forget the PM’s suggestion that unemployed youths could sell some pakodas. Did he have onion pakodas in mind?