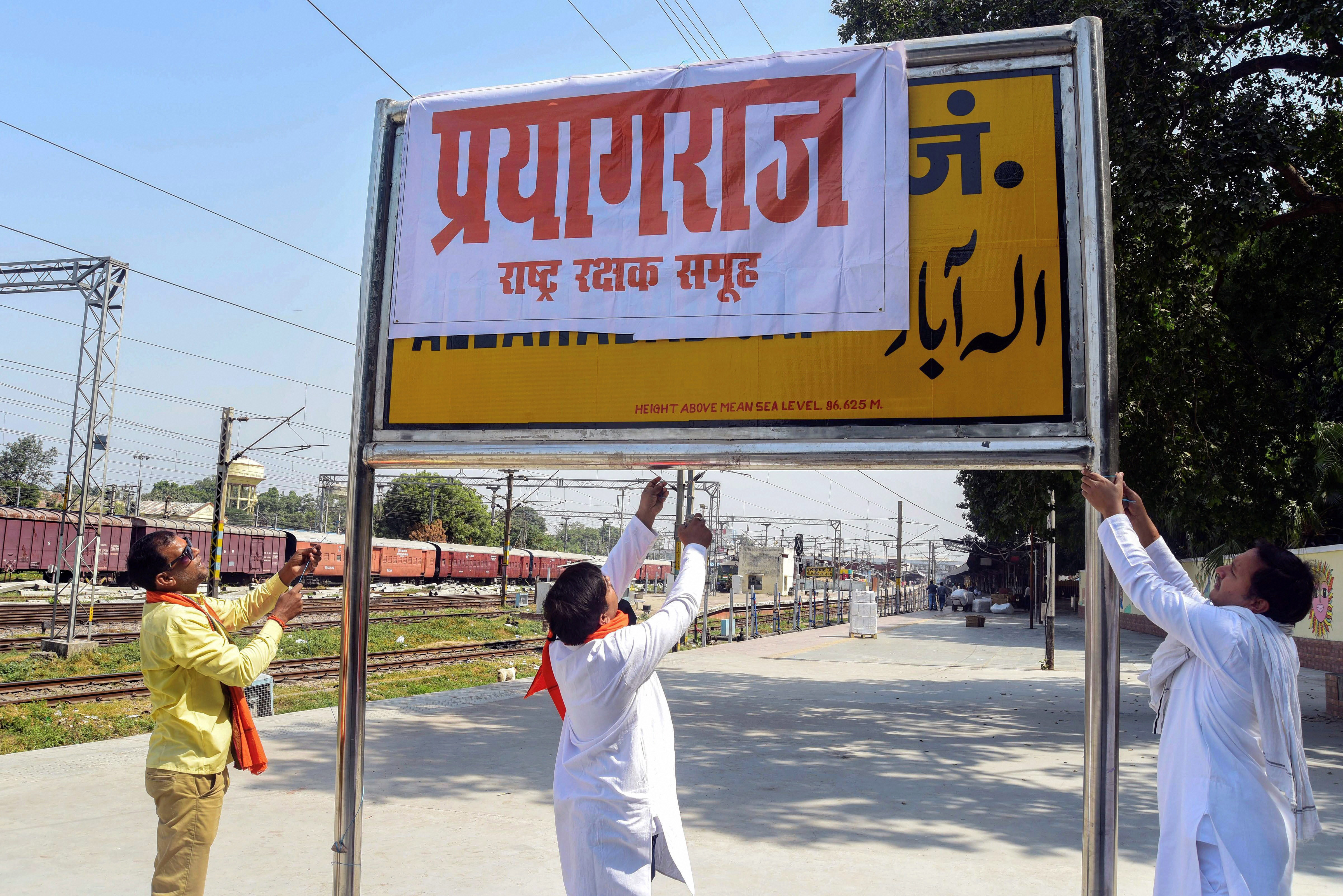 Activists of the Rashtriya Rakshak Samuh cover a railway station sign that says "Allahabad Junction" with a poster that says "Prayagraj", as the Uttar Pradesh government approves renaming the city ahead of the Kumbh Mela in Allahabad on Wednesday
PTI Photo
The Editorial Board   |   Published 19.10.18, 02:16 AM

Rechristening can be mischievous business. It is especially so when a politician helms the name change. The chief minister of Uttar Pradesh, Yogi Adityanath, has proposed to change the name of Allahabad, one of India’s most ancient cities steeped in myth and history, to Prayagraj. Mr Adityanath’s proposal, unsurprisingly, has met with his cabinet’s approval, even though the chief minister’s detractors have opposed the move on a number of grounds. For instance, a member of the Samajwadi Party has alleged that this is a ploy on Mr Adityanath’s part to deflect public attention from serious administrative failures. The shocking pollution of the Ganga — the Bharatiya Janata Party had promised to remove the filth as an electoral pledge — patchy preparations for the approaching Ardh Kumbh Mela, a marked deterioration in the law and order situation and sustained polarization — Mr Adityanath and his party allegedly endorse this kind of divisiveness — seem to have soured the public mood. The BJP leader has now thought up a palliative — baptizing Allahabad anew.

The real reason for Allahabad’s renaming must be sought in the BJP’s sustained campaign to distort history. Distortion, in this case, alludes to expungement. The BJP has succeeded in ridding some of India’s public spaces of their mixed legacies. Mughalsarai is now named after an ideologue of the Rashtriya Swayamsevak Sangh; a road in the capital bearing the name of Aurangzeb is known by a new name. The fact that another Mughal emperor had given Allahabad its name could not possibly have sat easily with the proponents of Hindutva who are eager view India’s history through a majoritarian lens. Such a jaundiced vision resists the ideals of syncreticism and pluralism, the tenets that give the Idea of India its remarkably inclusive character. Ironically, over the years, Allahabad — the town is situated at the confluence of sacred rivers — has been held up as an example of a culture that celebrates the harmonious coexistence of multiple ideas and faiths. That must have added to Mr Adityanath’s sense of urgency. It can be argued that merely changing the name of a place is not enough to erase its ancient, diverse traditions. But disturbing transitions often begin with seemingly benign revisions. In that sense, the renaming of Allahabad to Prayagraj should be read as an omen.