Female 'hero' in Asterix: An Adrenaline rush that's not enough

Has anything really changed if a woman is made to discard her feminine form in order to count as a ‘hero’? 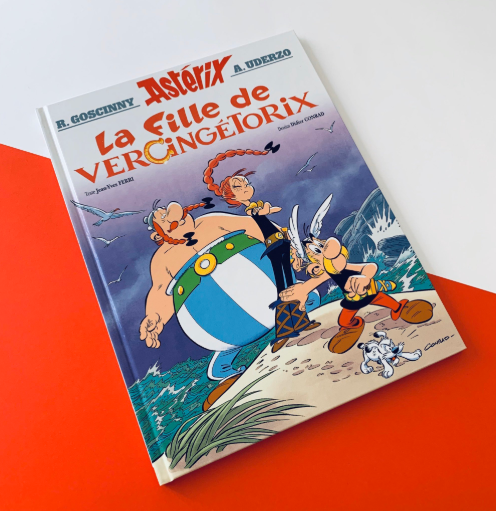 The village of the indomitable Gauls — by Toutatis! — is under attack. But it is not cunning Caesar and his legionnaires who are rampaging across the village. Lo and behold, it is a woman, who, rumour has it, would give Asterix and Obelix as good as she gets. Although this cult comic series has had women characters since its inception, on its 60th anniversary, the strip is all set to get its first “female hero”. Adrenaline — the daughter of Vercingetorix, that iconic leader of Gauls — is not like any woman Asterix and his fellow villagers have known. Unlike Impedimenta, Bacteria, Hydrophobia or Panacea, the mercurial ladies of this village, Adrenaline will not depend on ‘feminine’ guile to have her way. In the new book, Jean-Yves Ferri, who has written the last three books, has the grumpy, headphone-wearing teenager running amok in the village. Asterix and Obelix — did they have a gulp of Getafix’s magic potion? — apparently struggle to keep up with her.

But as a Frenchman once famously put it, the more things change, the more they stay the same. Thus, in order to rank as the first “female hero” — what is wrong with ‘heroine’? — Adrenaline must have, among other things, a name that epitomizes masculinity. That is not all. She also has to put up with “everything that is feminine” being “focused on her face”, as Didier Conrad, the illustrator, put it. One assumes the last bit is code for her androgynous physique. Has anything really changed if a woman, even a fictional one, is made to discard her feminine form in order to count as a ‘hero’? Worse, in spite of all her courage, she must depend on Asterix and Obelix to keep her safe from the Romans. For a hero, she seems to be quite a damsel in distress. Or is it that Adrenaline’s heroics lie in fooling the masculine ego into doing the hard work, while she has all the fun? After all, as the likes of Panacea have proven for decades, if the so-called feminine charms are all that men are ready to acknowledge in a woman, these can cleverly be wielded to run rings around menfolk.

Asterix is not the only comic to fall into the trap of misogyny. Think of Bianca Castafiore, the only recurring woman character in Tintin, or Blondie, who was only recently “allowed” to work, even though the strip is named after her. Even women with superpowers find their kryptonite in sexism — there have been many instances of Wonder Woman and Batgirl bumbling in sticky situations, only to be rescued by the men in capes.

The times, though, they are a-changin’. Comics no longer cater to a predominantly male audience. The publishers of Dennis the Menace recently recognized this when an 11-year-old girl wrote them an angry letter calling out their sexism. Perhaps that is why Dennis is now no longer a menace. He even admitted to Margaret Wade — the girl he is known to insult at the drop of a hat — that he was “modelling misogynistic sexism”. There is, evidently, much ground for Adrenaline to cover before she can keep the sky from falling over Asterix’s head. Perhaps she could learn a trick or two from Cleopatra, who is known to have caused Caesar’s knees to tremble.